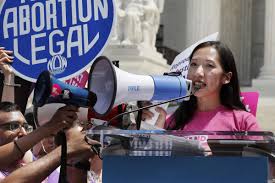 Planned Parenthood president ousted after just 8 months on the job!

The president of Planned Parenthood, the largest abortion provider in the U.S., was removed from her position Tuesday after just eight months. Dr. Leana Wen tweeted that Planned Parenthood’s board had “ended my...
by Joy Smith July 16, 2019 277 Views

The president of Planned Parenthood, the largest abortion provider in the U.S., was removed from her position Tuesday after just eight months.

Dr. Leana Wen tweeted that Planned Parenthood’s board had “ended my employment at a secret meeting. We were engaged in good faith negotiations about my departure based on philosophical differences over the direction and future of Planned Parenthood.” She later posted a copy of a letter to Planned Parenthood officials in which she said that she was “leaving the organization sooner than I’d hoped …”

“I came to Planned Parenthood to run a national health care organization and to advocate for the broad range of public health policies that affect our patients’ health,” Wen added. “… The new Board leadership has determined that the priority of Planned Parenthood moving forward is to double down on abortion rights advocacy … With the landscape changing dramatically in the last several months and the right to safe, legal abortion care under attack like never before, I understand the shift in the Board’s prioritization.” 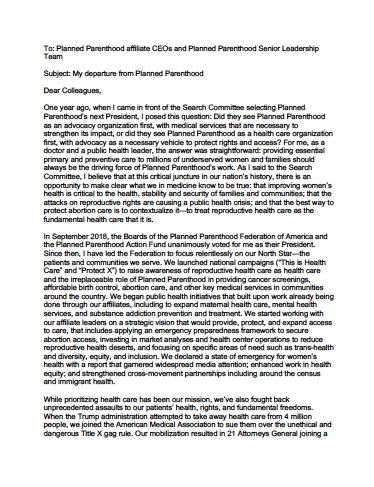 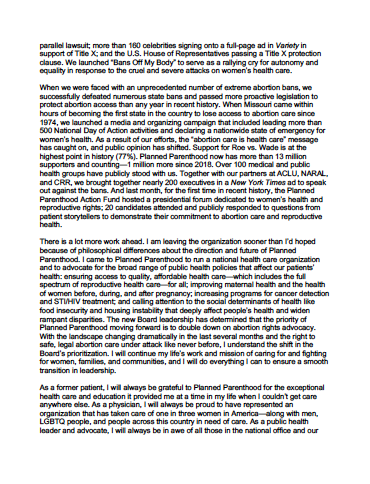 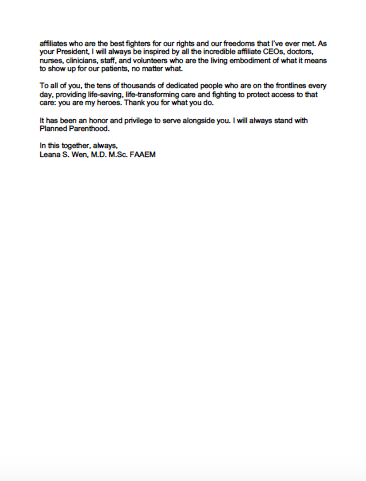 To all my colleagues at Planned Parenthood, the tens of thousands of dedicated people who are on the frontlines every day, providing life-saving, life-transforming care and fighting to protect access to that care: you are my heroes. Thank you for what you do.

The Washington Post, citing “a person aware of the board’s perspective,” reported that Planned Parenthood had attempted to correct issues with Wen’s management style that had caused “serious conflicts” and “difficulty working with staff” for the past six months. The source also denied that the move to remove Wen was the result of any disagreement over the organization’s direction.

Her departure came as the Trump administration announced it would start enforcing new rules that ban taxpayer-funded family planning clinics referring women for abortions. Planned Parenthood, the largest recipient of those funds, says it will not abide by those rules.

Without elaboration, Planned Parenthood announced Wen’s departure via a Twitter post, thanking her for her service and wishing her luck going forward.

It also announced that Alexis McGill Johnson, co-director of a research consortium called the Perception Institute, will serve as acting president of Planned Parenthood and its political wing, the Planned Parenthood Action Fund, while a search for a new permanent leader is conducted.

Wen, a Chinese immigrant who fled her native country when she was 8, was the first doctor to hold the post in five decades when she replaced Cecile Richards in November 2018. She had previously served as Baltimore’s health commissioner since 2015.

With about 400 clinics, Planned Parenthood is the largest provider in the federal family planning program for low-income women, known as Title X. The program does not pay for abortions, but until now clinics had been able to refer women for the procedure. Planned Parenthood clinics have long been a target for religious and social conservatives because the clinics separately provide abortions. 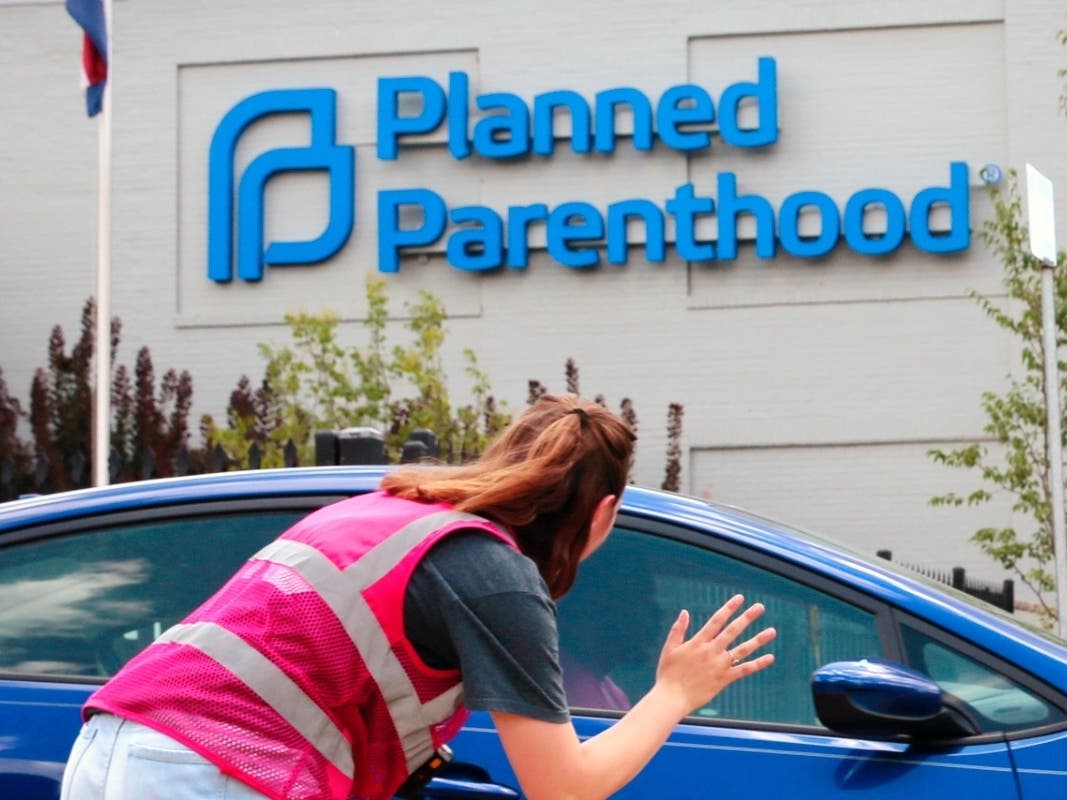 Jacqueline Ayers, Planned Parenthood’s top lobbyist, said its clinics will stop accepting federal money and tap emergency funding as they press Congress and the courts to reverse the administration’s ban.

Title X serves about 4 million women annually through independent clinics. Taxpayers provide about $260 million a year in grants to clinics, but that money by law cannot be used to pay for abortions.

Watch: Eric Garner’s Daughter Pops Off On The Justice System!