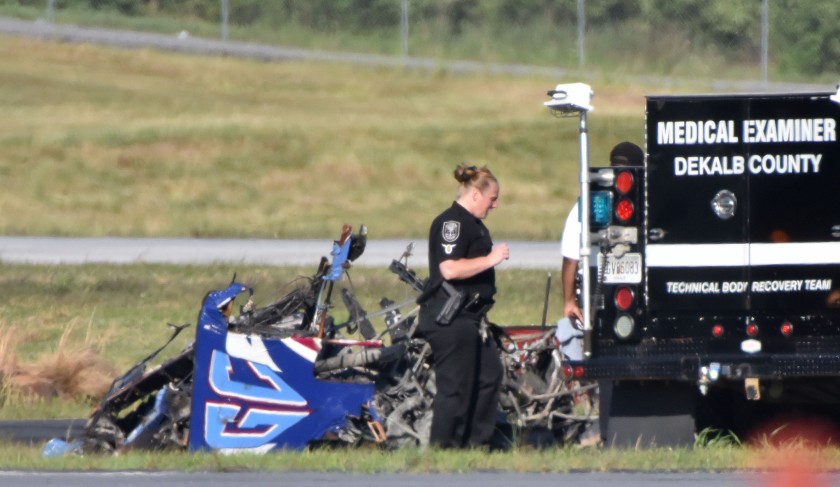 A small airplane broke up in flight before slamming into a DeKalb County townhouse, killing the pilot and a passenger, according to a National Transportation Safety Board preliminary report. ...
by Raquel Jayson November 19, 2019 214 Views

A small airplane broke up in flight before slamming into a DeKalb County townhouse, killing the pilot and a passenger, according to a National Transportation Safety Board preliminary report.

The report does not identify the cause of the Oct. 30 crash, but instead includes the information investigators will use to help determine the cause. Shortly after takeoff from DeKalb-Peachtree Airport, the pilot also reported he lost a critical tool, according to the NTSB.

Leslie Csanyi Jr., 59, and Scott Lowrie, 60, both from North Carolina, were killed in the crash. Csanyi was piloting the single-engine Piper-28, which slammed into the top floor of a townhouse near I-85 and Clairmont Road.

No one was inside the complex building at the time of the crash, and no other injuries were reported, according to DeKalb fire Capt. Dion Bentley. Six units were deemed unsafe because of structural damage and fuel vapors. On Monday, a blue tarp remained over the damaged homes, Channel 2 Action News reported.

In its preliminary report, the NTSB includes all of the plane wreckage. It also includes information from air traffic controllers, who told the pilot to turn shortly after takeoff.

The report ran down the evidence collected onsite, plus key data, including when controllers told the pilot to turn shortly after takeoff.

“The pilot advised that they had ‘lost their vacuum gauge,’” the report states.

The vacuum gauge controls instruments in the cockpit that tell a pilot things such as direction, altitude and whether the plane is pitching up or down, left or right, according to Cliff Rogers, a Channel 2 engineer and pilot.

“When you have that happen, you can start getting into a turn, you can start trying to correct some things, and you can get what’s called in a ‘death spiral’ to where you’re turning and don’t recognize it,” Rogers said. “And you’re putting the wrong control inputs in to correct, and it just gets a faster and tighter spiral, and you can put the aircraft in a high speed and a steep descent and in a turn, in a bank, and it can put a lot of forces on the airplane that it wasn’t designed to take.”

It is expected to take several months for the NTSB to release its final report on the cause of the crash.