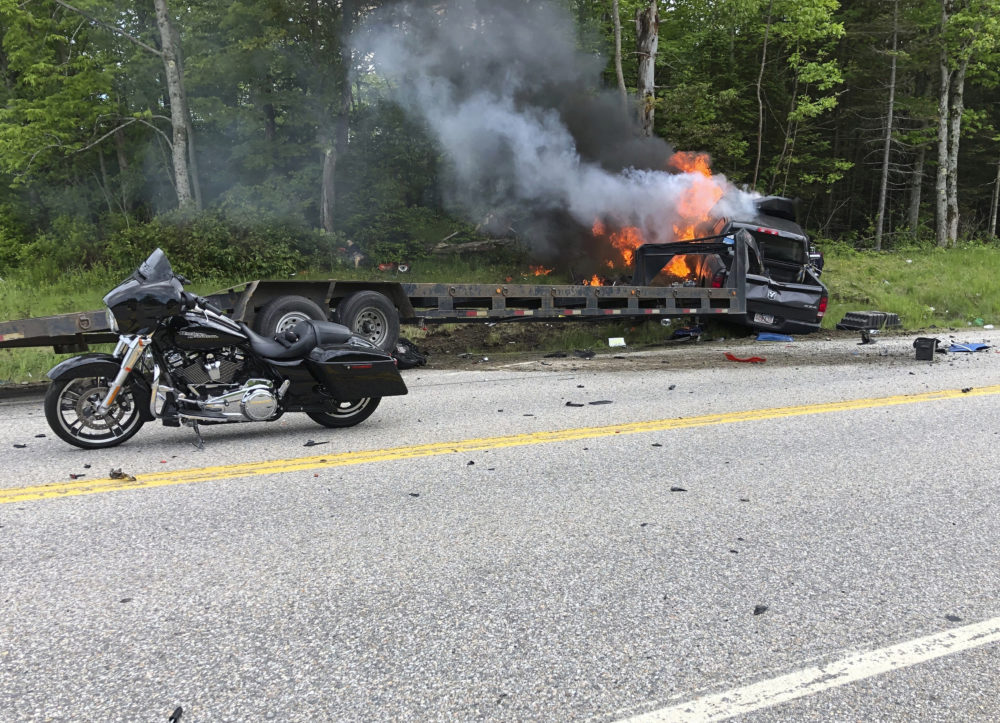 Pickup truck driver arrested after causing a collision that has left 7 motorcyclists dead!

The driver said to be behind the wheel of a pickup truck that collided with seven bikers in New Hampshire on Friday – killing all of them – has...
by Joy Smith June 24, 2019 421 Views

The driver said to be behind the wheel of a pickup truck that collided with seven bikers in New Hampshire on Friday – killing all of them – has been arrested at his home Monday in Massachusetts. Volodoymyr Zhukovskyy, 23, is now facing seven counts of negligent homicide after being taken into custody this morning in West Springfield, the New Hampshire Attorney General’s Office announced. He is expected to make his first court appearance this afternoon.

The crash unfolded at around 6:30 p.m. Friday on U.S. 2, a two-lane highway that passes through the small town just north of Mount Washington. Witnesses described a “devastating” scene as bystanders tried to help the injured amid shattered motorcycles.

This photo provided by Miranda Thompson shows the scene where several motorcycles and a pickup truck collided on a rural, two-lane highway Friday, in Randolph, N.H. (AP/Miranda Thompson)

The victims in the crash have been identified as Michael Ferazzi, 62, of Contoocook, N.H.; Albert Mazza, 49, of Lee, N.H.; Desma Oakes, 42, of Concord, N.H.; Aaron Perry, 45, of Farmington, N.H.; Daniel Pereira, 58, of Riverside, R.I.; and Joanne and Edward Corr, both 58, a husband and wife from Lakeville, Mass. All were members or supporters of the Marine JarHeads, a motorcycle club made up of Marines and their spouses.

Soon after the names were made public, New Hampshire Gov. Chris Sununu ordered all flags on public buildings and grounds in the state to be flown at half-staff from dawn to dusk Monday.

“Friday’s tragic accident in Randolph has struck our state and our citizens in a profound way,” Sununu said in a statement.

Zhukovskyy was questioned at the scene of the crash and allowed to return to Massachusetts, the National Transportation Safety Board has said. He was arrested Monday morning on a fugitive from justice charge related to Friday’s crash, which is standard for someone charged in a warrant in another state, Massachusetts State Police said.

A man who answered the phone at the home of Zhukovskyy’s family and would identify himself only as his brother-in-law told the Associated Press Monday that the family is in shock and feeling the same pain as everyone else but couldn’t say whether the driver was right or wrong.

Since the accident, the brother-in-law said, Zhukovskyy had remained in his room, not eaten and talked to no one.

Lena Whaithe under fire for calling out Black Hollywood Veterans!