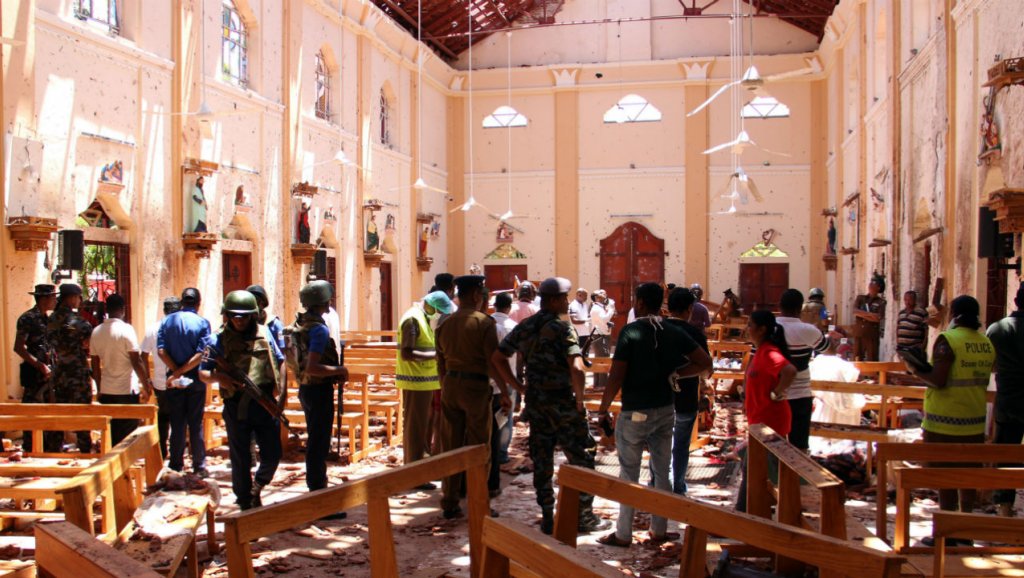 As Christians in Sri Lanka gathered on Sunday morning to celebrate Easter Mass, powerful explosions ripped through three churchespacked with worshipers, leaving hundreds of victims amid a havoc of splintered...
by Raquel Jayson April 21, 2019 726 Views

As Christians in Sri Lanka gathered on Sunday morning to celebrate Easter Mass, powerful explosions ripped through three churchespacked with worshipers, leaving hundreds of victims amid a havoc of splintered and blood-spattered pews.

In what the police said were coordinated terrorist attacks carried out by a single group, bombers also struck three hotels popular with tourists. At least 207 people were killed and 450 others injured, a police spokesman, Ruwan Gunasekera, said.

News of the bombings, the largest attack on South Asian Christians in recent memory, rippled out all Easter morning, interrupting celebrations across the world. Pope Francis, after celebrating Mass in St. Peter’s Square, said the attacks had “brought mourning and sorrow” on the most important of Christian holidays.

• The bombings began around 8:45 a.m., and targeted Roman Catholic houses of worship — St. Anthony’s Shrine in Colombo, the capital; St. Sebastian’s Church in Negombo; and Zion Church in Batticaloa — along with three luxury hotels: the Shangri-La, the Cinnamon Grand, and the Kingsbury, all in Colombo.

• At least seven suspects were held in connection with the bombings, Sri Lanka’s defense minister, Ruwan Wijewardene, said. He said that suicide bombers had been behind the explosions.

• A top police official alerted security officials in an advisory 10 days ago about a threat to churches from a radical Islamist group, National Thowheeth Jama’ath. But it was unclear what safeguards, if any, were taken, or if in the end the group played any role in the violence. And on Sunday, reflecting frictions within the government, the prime minister pointedly said he had not been informed.

• At least 35 of the dead were foreigners, several of them American, the authorities said. Other victims were British, Chinese, Dutch and Portuguese nationals, according to officials and news reports.

Covered bodies and debris in St. Anthony’s Shrine in Colombo, Sri Lanka, after a string of explosions ripped through hotels and churches on Sunday.CreditIshara S. Kodikara/Agence France-Presse — Getty Images 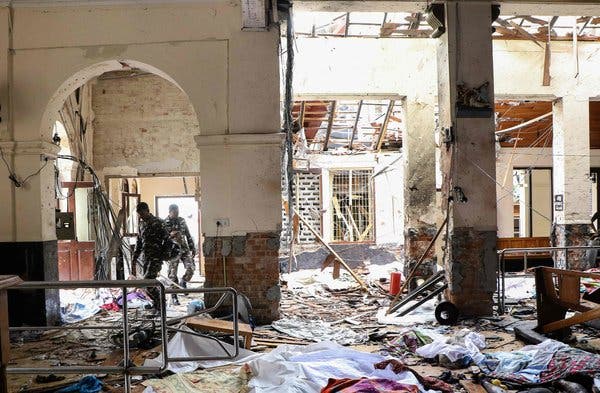 A wave of explosions as worshipers celebrated Mass

Images from the bombing sites showed bloodied and shattered pews and victims lying on the floor of houses of worship. The walls and windows of the targeted hotels were blown out. 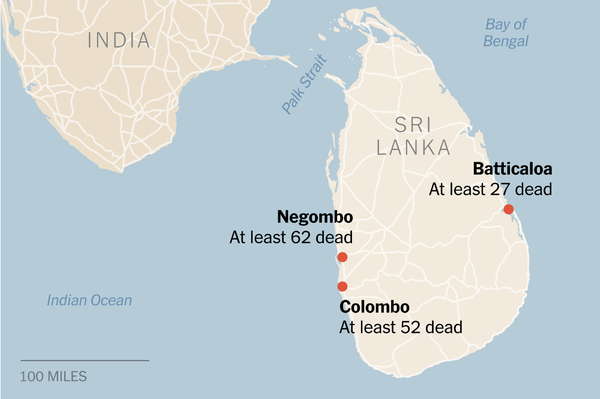 Sri Lanka Bombing Maps: What We Know About 8 Attack Sites

The attacks struck churches, five-star hotels and other sites in multiple cities.

Some of the victims were killed as worshipers gathered for Mass at St. Anthony’s Shrine in Colombo; St. Sebastian’s Church in Negombo, about 20 miles north of Colombo; and Zion Church in the eastern city of Batticaloa, officials said.

The attacks also targeted high-end hotels in the capital, including the Shangri-La, the Cinnamon Grand and the Kingsbury.

A witness, Sarita Marlou, who was at the Shangri-La hotel, wrote in aFacebook post that one blast occurred at 8:57 a.m. in the Table One Restaurant on the third floor where people had gathered for brunch.

“Felt the blast all the way up to the 17th floor where we were sleeping,” she wrote. “Few minutes later, we were asked to evacuate the hotel. While running down the stairs, saw a lot of blood on the floor but we were still clueless as to what really happened.”

Ms. Marlou said the guests had been stuck outside for more than two hours before being ushered back inside as the sun got hot. But they still were not cleared to go back to their rooms, she wrote.

N. A. Sumanapala, a shopkeeper near St. Anthony’s Shrine who said he had run inside to help, said: “It was a river of blood. Ash was falling like snow.”

Sri Lankan Special Task Force members during a raid on a house in a suburb of Colombo on Sunday.CreditIshara S. Kodikara/Agence France-Presse — Getty Images 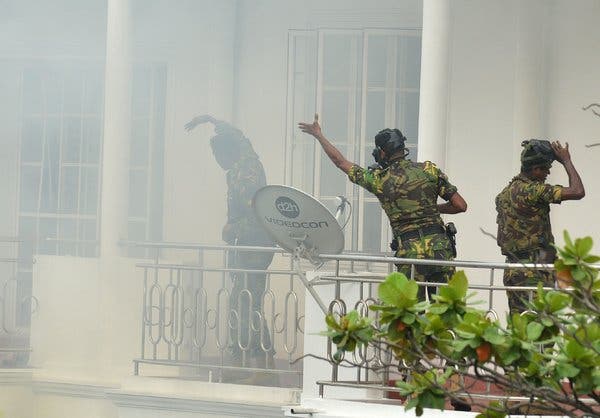 Seven are arrested in connection with the blasts

Ruwan Wijewardene, the defense minister, said that seven people had been arrested and identified in connection with the attacks. The government also said that suicide bombers had set off the explosions.

“We believe these were coordinated attacks, and one group was behind them,” Mr. Wijewardene said. He urged the news media not to report the names of the attackers or to make them “martyrs.”

Three officers were killed while hunting for the attackers at a housing complex in the Colombo suburb of Dematagoda, officials said. The police said they had found explosives inside one of the apartments and that a firefight had broken out between officers and the suspects inside the building.

One suspect detonated explosives during questioning by the police inside a home in the suburb. Officials at the site said they believed the attacks had been planned there. As the authorities questioned members of the group, another suspect escaped, and was being sought by a circling helicopter.

Mr. Wijewardene said that police units had been put on alert a week ago by the force’s chief inspector, Pujith Jayasundara, about potential attacks on churches. It was unclear what steps had been taken to safeguard against attacks.

The attacks followed a police warning

“You should instruct all personnel to pay strict heed to this report and be extra vigilant and cautious of the V.I.P.s and locations coming under your purview,” wrote Priyalal Dassanayake, the deputy inspector general.

The letter, citing foreign intelligence officials, identified the group suspected of planning attacks as National Thowheeth Jama’ath. It named individual members of the group, which it said advocates spreading Islam by killing “nonbelievers.”

“Highly confidential investigations regarding the above are in process,” the letter said. 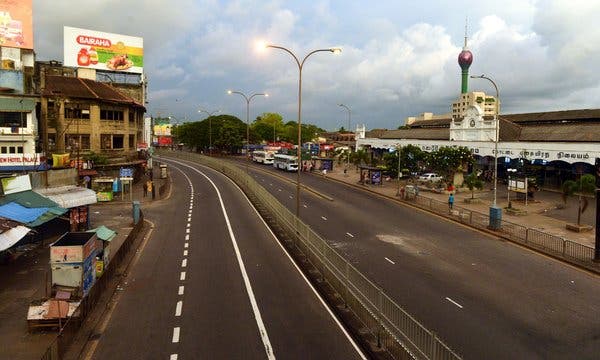 Though Sunday’s attacks have no known link to social media, Sri Lanka has a troubled history with racial violence incited on the platforms. Its ban was an extraordinary step that reflects growing global concerns about social media.

Last year, Sri Lanka briefly blocked social networks after viral misinformation and calls to anti-Muslim violence, circulating largely on Facebook, were blamed for a wave of riots and lynchings. Government officials had repeatedly warned Facebook, which also owns Instagram and WhatsApp, that the posts could lead to violence. Though the company promised to hire more moderators and improve communication, the episode left officials wary of the social media giant.

Other countries, such as India, have periodically blocked social media during spasms of violence linked to the platforms. While researchers have blamed Facebook for inciting racist attacks in a range of countries, including Germany, the risk is thought to be higher in places where trust in the local authorities is lower and histories of communal violence are more recent.

Sri Lanka’s ban on social media on Sunday represented an escalation in the global backlash against social media companies because the move appeared to be pre-emptive. Rather than trusting in Facebook and other companies to police their networks for hate speech or incitement that could arise as a result of Sunday’s attacks, the government was treating the platforms as too dangerous to remain online.

The prime minister, Ranil Wickremesinghe, called for people not to believe false information circulating online. The Sri Lanka Red Cross also said in a tweet that online rumors that its building had been attacked were false. 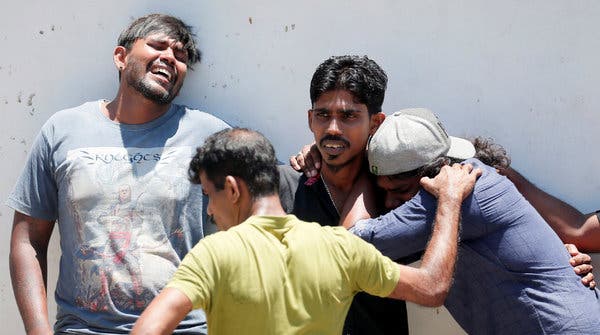 Wounds of past violence are still fresh

Sri Lanka’s civil war ended 10 years ago, but memories of urban carnage are still fresh, particularly for residents of the capital. During the conflict, brutal bombings of airports, bus stations, banks, cafes, and hotels were not uncommon.

The Cinnamon Grand, one of the hotels targeted on Sunday, had been blown up before, in 1984, when it was called the Hotel Lanka Oberoi.

The Roman Catholic Church in Sri Lanka traces its roots to the arrival of the Portuguese in the early 1500s and the subsequent influence of Portuguese, Dutch and Irish missionaries. Sri Lankan Catholics make up a significant minority of the country’s population, accounting for roughly 6 percent of the country and centered largely in the Colombo-Negombo area.

In 1995, Pope John Paul II traveled to Sri Lanka to canonize Joseph Vaz, an Indian-born priest and missionary. Thousands of people greeted the pope’s motorcade as it traveled from the airport in Negombo to Colombo.

Meenakshi Ganguly, the South Asia director at Human Rights Watch, said that given Sri Lanka’s long history of ethnic and religious violence, including a nearly three-decade civil war that ended only in 2009, it was premature to jump to conclusions about whether radicalized Muslims might have played a role in the assault.

But the scale of the attacks and the death toll on Sunday were unprecedented, even by Sri Lanka’s bloody standards, Ms. Ganguly said. “In three decades of war, this scale of attack has never happened,” she said. “In terms of serious, religion-based violence, we haven’t really seen that.”

The blast shattered windows and walls at the Kingsbury Hotel in Colombo.CreditM. A. Pushpa Kumara/EPA, via Shutterstock 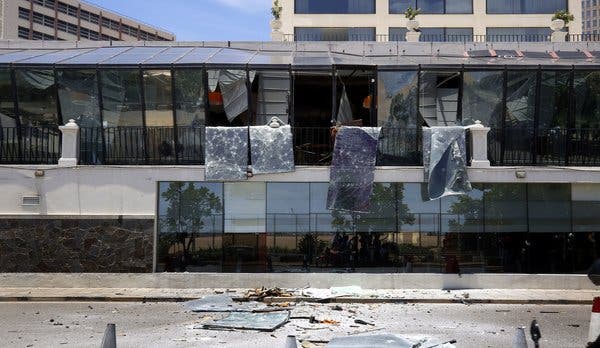 Foreigners, including Americans, were caught in the carnage

As the Sri Lankan news media reported that 35 foreigners were among the dead, the Foreign Ministry said in a statement that 25 unidentified bodies were believed to be foreign citizens, and that nine other foreigners were missing.

Secretary of State Mike Pompeo said several Americans had been killed. “The United States condemns in the strongest terms the terror attacks in Sri Lanka,” he said in a statement.

The Dutch foreign minister, Stef Blok, said that one citizen from the Netherlands had died, and the Turkish ambassador to Sri Lanka, Tunca Ozcuhadar, told the news channel TRT World that two Turkish engineers were among the victims.

Chinese citizens were among the dead, too, according to news reports.

Nineteen foreigners were receiving treatment for injuries at the Colombo National Hospital, the Foreign Ministry said.

Pope Francis, after celebrating Easter Mass in St. Peter’s Square, said, “I want to express my affectionate closeness to the Christian community, struck while it was gathered in prayer, and all the victims of such cruel violence.”

He added, “I entrust to the Lord all those who were tragically killed.”

I strongly condemn the cowardly attacks on our people today. I call upon all Sri Lankans during this tragic time to remain united and strong. Please avoid propagating unverified reports and speculation. The government is taking immediate steps to contain this situation.

2,744 people are talking about this

India’s prime minister, Narendra Modi, called the blasts “horrific” in a post on Twitter. “There is no place for such barbarism in our region,” he wrote. India is Sri Lanka’s closest neighbor and shares many cultural and economic ties with the island nation.

Prime Minister Imran Khan of Pakistan said his country “stands in complete solidarity with Sri Lanka in their hour of grief.”

Prime Minister Theresa May of Britain, President Emmanuel Macron of France and Chancellor Angela Merkel of Germany were among the European leaders to express their grief. Jean-Claude Juncker, president of the European Union Commission, said that he had received news of the bombings “with horror and sadness.”

It was with horror and sadness that I heard of the bombings in #SriLanka costing the lives of so many people. I offer my heartfelt condolences to the families of the victims who had gathered to worship peacefully or come to visit this beautiful country. We stand ready to support.

560 people are talking about this

President Recep Tayyip Erdogan of Turkey also wrote on Twitter that the attack had been “an assault on all of humanity.”

President Trump said on Twitter that the United States stood ready to help, though the tweet inflated the number of victims in a typo. “Heartfelt condolences from the people of the United States to the people of Sri Lanka on the horrible terrorist attacks on churches and hotels,” he wrote, adding that the explosions had “killed at least 138 million people and badly injured 600 more.”