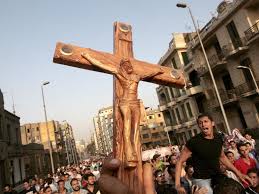 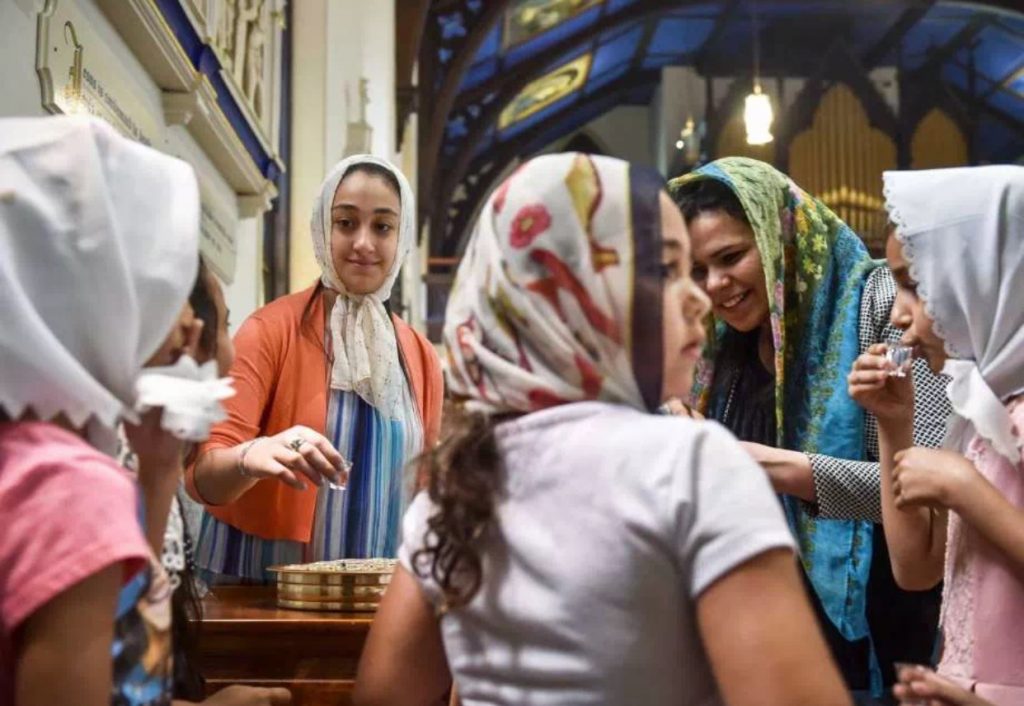 YORK, Pa. (AP) — A photo of a woman in Ragaa Thabet’s living room hangs on the wall next to one of a pensive, bearded man — Pope Shenouda III of the Coptic Orthodox Church of Alexandria.

The woman in the photo is smiling. Her face is a bit pixelated, as if the photo was enlarged. It was the most recent photo Thabet could find of her sister-in law, who died of an unknown illness in 2015 at age 32.

Thabet and her husband, Hany Thomas, moved from Egypt in 2009, and they have missed a lot of funerals. For her, the photo is a daily reminder not only of someone she loves and misses, but also of the sacrifice her family has made in the hope that her children will have a better life in the U.S.

In the living room, her two boys, Phelo and Mena, watch a Transformers cartoon. They’ve never been to Egypt. They know their grandparents as video images on Skype and Facebook.

Thabet and Thomas are not alone in York, however. They are among the 60 or so families of Coptic Christians who moved to York County to escape religious persecution in Egypt. The migration is part of a broader movement of Copts that began at urban centers in places such as New Jersey and Southern California. Since then, Copts have established churches in most states.

Many of those Copts came to the U.S. to escape escalating violence in Egypt. Some have refugee status. Others came through a lottery system that allows a certain number of people to immigrate to the U.S. each year.

Thomas and Thabet moved here to raise a family. But the move to the U.S. has brought new challenges to raise their children in their faith.

“Some days, it’s very hard,” Thabet said. “I do it for my children, not myself.”

A history of persecution

The Coptic Orthodox Church was founded by St. Mark in the years following the death of Jesus Christ and broke free from the Roman Catholic Church about 400 years later. The church shares Catholic traditions including baptism and confession. There are also differences: For example, priests may marry, and Copts don’t consider their pope to be infallible.

Copts, along with a small number of other Christians, make up about 10 percent of Egypt’s 94.6 million population.

Thabet and Thomas have cross tattoos on their wrists_a centuries-old tradition among Copts. In Egypt, their tattoos and their names marked them as Christians. In addition, like all Egyptians, their religion was listed on their mandatory, government-issued ID cards.

Copts have lived in Egypt since their religion was born, but in recent decades, they’ve faced increasing violence from Islamic fundamentalist groups affiliated with Al-Qaeda and ISIS.

Thabet, 37, remembers being in college when a local church was bombed, killing several people. That was in 2000. Later, the church she was married in was also bombed.

Since then, it’s gotten worse, she said.

Thabet pointed to two suicide bombings this year at Coptic churches on Palm Sunday, a Christian holiday. Those bombings killed 44 people and led the Egyptian government to declare a state of emergency.

The Coptic church has always faced persecution, Deacon Joseph Ghabour said in a recent USA Today report. That history has continued in recent years, with bombings, beheadings and attacks on churches, and a December 2016 attack that killed 25 people.

Ghabour said that high-profile violence has shown the world the kind of persecution Copts face, but it reflects only a sliver of the never-ending, smaller attacks they have long endured.

Copts also face systematic oppression in Egypt, Thomas said. It’s harder for Copts to get into colleges or get good jobs. It’s virtually impossible for them to get jobs in government.

Those were all reasons why Thabet applied for the lottery to immigrate to the U.S.

“I applied because I worried about my kids’ future,” she said. “I want them to have a better chance for an education and a future. I want them to be safe.”

The first five times, she didn’t get lucky. The sixth time, she did. It was 2009. She was pregnant with her first child. She and Thomas said goodbye to family, knowing they might never see them again.

In the U.S., the first challenge was finding work. Thomas has a bachelor of science degree in veterinary medicine. Thabet has a degree in science. However, those degrees aren’t accepted by licensing authorities in the U.S., Thomas said.

In Egypt, he worked for a medical company, a high paying job. In the U.S., they took whatever jobs they could get, working at first as waiters. Eventually Thabet got a medical assistant certificate, but she wanted to do more with her career. For now, she works at Community Progress Council as an assistant teacher while studying child development.

Thomas trained to be a veterinarian, but struggled to pass an English language exam.

The Zaki family is another Coptic family that made the same decision and has faced some of the same challenges.

Twenty-four-year-old Tena Zaki came to the U.S. as a refugee with her parents. Like Thabet, she can remember the bombings and remember being scared.

Unlike Thabet however, she’s been in the U.S. since she was 12 and had to adapt as she came of age in an unfamiliar culture.

Zaki teaches Sunday school to the younger children, who see her as a bridge between their experience and that of their parents. As more children are born in the U.S., she said, it gets harder to keep them connected to their roots.

U.S. culture is a lot more secular than in Egypt, Zaki said. In Egypt, men and women don’t casually date and go out like in the U.S. Zaki didn’t go to her high school prom, and she has never dated. In high school, bullies targeted her for being “different.”

In college, it got even more difficult, as so much of the social scene revolved around drinking. Zaki has never tasted alcohol.

Zaki hopes to marry and raise a family in York’s Coptic church community — but right now that community lacks a permanent home.

Zaki and her mother, Mervat, connected with Thabet through the Coptic community in Lancaster, though they all live in York County.

Mervat Zaki and Thabet bonded over a common dream to open a Coptic church in York.

Thabet and her sister-in-law spoke on the phone or online most days. They talked about family. They made plans for her to someday bring her family to the U.S.

When she died, Thabet cried for weeks. “For about two months I couldn’t believe what happened. I was so mad.”

After his sister’s death, Thomas stopped eating. He stopped going to church in Lancaster. He just wanted to sleep.

Thabet stopped going to church as well, for a while. It didn’t help that she felt uncomfortable driving the four-lane highway from York to Lancaster. She tried other denominations, but none made up for having a faith community of other Copts.

In need of a church

It was amid that loss and sadness that Thabet and Mervat Zaki went to St. Mary’s Catholic Church and asked the priest if they could hold Coptic Mass there.

The Rev. Jon Sawicki, who runs St. Mary’s, said he felt obliged to help them.

“They said, if we have a priest here next week, can we have a service?” Sawicki said. He cleared it with the bishop, and next Saturday about 250 people flooded into the church.

The Copts’ experience is in some ways similar to what his own ancestors experienced when they moved from Italy to the eastern coal regions of Pennsylvania a hundred years ago. “I see echoes of my great grandparents. They’re supporting one another. They’re helping each other in job searches. It’s another chapter in the same book.”

Unlike Sawicki’s ancestors, however, Thabet and Thomas have Facebook and Skype. The family has made live video chat a regular part of the week.

Still, it’s been a sacrifice, Thabet said. “Holy days and celebration time is hardest time for us without the family. At Easter time or Christmas, it’s very hard.”

Thabet and Zaki know that the church is a temporary solution. They have asked the Coptic Orthodox church to help find or build a church. It said it could provide some financial assistance, but not a lot.

Sawicki has been a blessing, Thabet said. However, they can’t stay there indefinitely. They need their own church. Everyone at the church prays that they’ll find a permanent place of worship in York.

The need for a permanent church also ties in with one of Thabet’s two hopes for her boys. She wants them to get an American education, and she wants them to keep their Coptic Christian faith.

So far, the sacrifices have been worth it, she said. “My boys are doing well here,” she said. “This is a better place for them