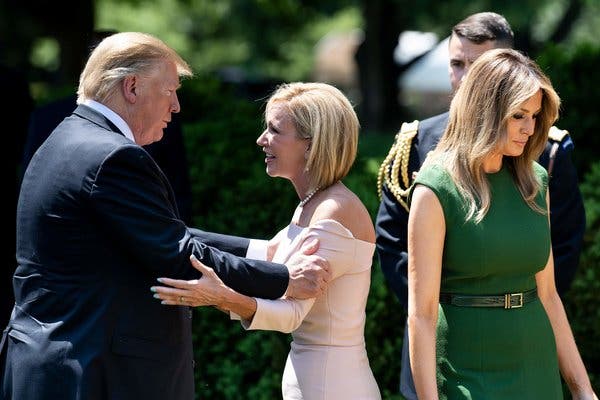 Ms. White, a Florida televangelist, is being brought into the Trump administration to help shore up his evangelical base — even though some Christians consider her beliefs heretical. Dwight...
by Zach Freeman November 4, 2019 780 Views

Ms. White, a Florida televangelist, is being brought into the Trump administration to help shore up his evangelical base — even though some Christians consider her beliefs heretical.

Dwight D. Eisenhower and Richard M. Nixon turned to Billy Graham, the evangelist so ubiquitous he was known as America’s Preacher. Barack Obama turned to Rick Warren, the author of “The Purpose Driven Life,” which was the best-selling nonfiction hardback in American history after the Bible.

Donald J. Trump has a televangelist from Florida: Paula White, an outsider whose populist brand of Christianity mirrors Mr. Trump’s conquest of the Republican Party. And she is in many ways a quintessentially Trump figure: a television preacher, married three times, who lives in a mansion.

For years he has called her his longtime friend and personal pastor. When he ran for president in 2016, he turned to her to drive his evangelical support. And on Thursday the White House confirmed that Ms. White had officially joined the administration to advise Mr. Trump’s Faith and Opportunity Initiative, which aims to give religious groups more of a voice in government programs devoted to issues like defending religious liberty and fighting poverty.

Her new role gives her a formal seat at the table as Mr. Trump tries to ensure that evangelicals — the foundation of his political base — remain united behind him in his bid to win a second term. As a liaison to Mr. Trump, Ms. White has regularly facilitated meetings for conservative pastors and White House officials, assuring the president’s core constituencies that he addresses their interests.

Among Christians, however, Ms. White is a divisive figure. Her association with the belief that God wants followers to find wealth and health — commonly called the prosperity gospel — is highly unorthodox in the faith and considered heretical by many. And experts on religion in politics said that Ms. White’s ascendancy was unlike any other relationship between a president and a faith adviser in modern times.

“I never would have guessed that Paula White and Donald Trump would be the preacher-president duo people remember like Billy Graham and Richard Nixon,” said Kate Bowler, a professor of Christian history at Duke Divinity School.

“Paula White survived scandal and little support from the religious right to become one of the only stand-alone women in the male-dominated world of televangelism,” Dr. Bowler said. “She has done what no one thought she could do, scraping out a place for an unpopular theology beside an unpopular president.”

Ms. White’s rise to greater prominence and influence in evangelical circles is strikingly similar to Mr. Trump’s rise among Republicans. Both were outsiders who often faced suspicion and scorn from more conventional, established leaders of the spheres in which they sought acceptance. And both survived accusations of financial misconduct and ethical improprieties.

Ms. White, who also goes by Ms. White-Cain after her marriage to Jonathan Cain, the Rock & Roll Hall of Fame keyboardist for Journey, did not respond to requests for an interview.

Some argue that by elevating figures like Ms. White, Mr. Trump is undermining Christianity in the same way he has damaged the Republican Party.

The move is “a very ominous sign” and signals that “Christian narcissism” has come into the White House, said the Rev. William J. Barber II, who organized the Moral Mondays protests in North Carolina and who spoke at the Democratic National Convention in 2016.

“The so-called prosperity gospel is a false gospel,” he said, comparing it to a theology that justified slavery because of economic prosperity. “It is an attempt to interpret the gospel to be primarily about personal wealth and personal power, which is contrary to the theology of Jesus where the good news was always focused on caring for the poor, the least of these, the stranger, the sick.”

But her appeal with some religious Christians helps Mr. Trump reach audiences that are not naturally inclined to support him.

Although hard to quantify, Ms. White’s influence in less politically active evangelical circles, including among televangelists and viewers of the popular Trinity Broadcasting Network, appeared to help Mr. Trump in 2016.

Most polls focused on Mr. Trump’s white evangelical or Roman Catholic support, but conservative political strategists also capitalized on his marginal support in Christian subsets, like some Hispanic and African-American charismatic churches. But in a sign of how unpopular Mr. Trump remains with African-Americans, several hundred people from Ms. White’s heavily African-American congregation left her church because of her association with him.

Mr. Trump’s candidacy had initially divided evangelical leaders, with many prominent social conservatives supporting candidates like Senators Ted Cruz of Texas and Marco Rubio of Florida during the Republican primary. Mr. Trump largely skirted the traditional Washington evangelical apparatus and instead surrounded himself with outsider figures who had amassed popular, if not traditionally political, influence, like Ms. White and the Liberty University president, Jerry Falwell Jr.

When it became clear that Mr. Trump would be the likely nominee, the two Christian factions came to a détente after two meetings one day in New York, largely around Mr. Trump’s support for anti-abortion policies, religious liberty and persecuted Christians in the Middle East. Ms. White, as the pastor personally closest to Mr. Trump, became a key liaison.

Darrell Scott, a pastor of a largely African-American church in Cleveland who supports Mr. Trump, said that Ms. White had been “active” in African-American and pentecostal circles for decades.

Tony Perkins, president of the Family Research Council who considers himself a more traditional conservative Christian, said that Mr. Trump had cooked up an “evangelical gumbo” by bringing together people from parts of Christianity that would ordinarily never intersect.

“I didn’t know Paula White before,” he said. “She came from a different stream than I’d probably swim in.” But as they’ve become close over the last three years, he said, he and other evangelicals who are not aligned with her theologically have come to realize their role with this administration is the same. “We’re there to influence public policy and move this nation forward where faith is openly welcomed, so that you don’t have to hide the fact that you’re a person of faith,” he said.

Ms. White has become a regular in Washington, organizing frequent meetings for pastors around the country to meet with administration officials. When Mr. Trump met with his informal evangelical advisory coalition this week, she was seated at his right hand.

Cynthia Bailey Confirms Her Wedding to Mike Hill Will Be Filmed for ‘RHOA’: ‘I’m in a Great Place’