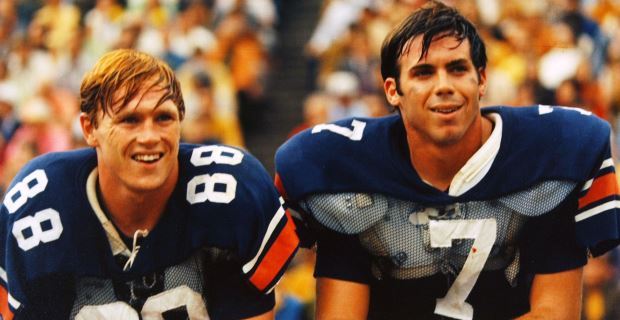 Quarterback Pat Sullivan, the 1971 Heisman Trophy winner while at Auburn University, was a second-round draft pick by the Atlanta Falcons. He played four NFL seasons before turning to...
by Zach Freeman December 1, 2019 314 Views

Quarterback Pat Sullivan, the 1971 Heisman Trophy winner while at Auburn University, was a second-round draft pick by the Atlanta Falcons. He played four NFL seasons before turning to coaching at Auburn, Texas Christian, Alabama-Birmingham and Samford. He was 69.

Sullivan’s family released a statement saying he “died peacefully at home,” surrounded by relatives. Sullivan had been diagnosed with throat cancer in 2003 and the statement said he “fought a long and difficult battle as a result of his treatments.”

As a quarterback, Sullivan led the Tigers to a 26-7 record over three seasons. He was awarded the Heisman his senior year in part for a thrilling win over an unbeaten Georgia in 1971. He finished that season with 162-of-281 passing for 2,012 yards and 20 touchdowns.

Pat Sullivan, who won Auburn’s first Heisman Trophy in 1971, has passed away at age 69. He’ll be remembered as a friend to Auburn football and college athletics. @PMARSHONAU with the first report.

The Birmingham, Ala., native was drafted by the Falcons in the second round (40th overall) of the 1972 draft. He appeared in 30 games (four starts), passing for 1,555 yards, five touchdowns and 16 interceptions, over a four year career in Atlanta. ADVERTISING

He stayed away from football for a decade, returning to Auburn in 1986 to coach quarterbacks under Pat Dye. He left in 1992 to become the head coach at Texas Christian University, where he captured a Southwest Conference title in 1994. He left TCU after a 1-10 season in 1997. He then worked as UAB’s offensive coordinator

He last coached at Samford, where he won a Southern Conference title, before retiring after eight seasons in 2014, citing health issues and saying his life needed “more balance.”

He was elected into the College Football Hall of Fame in 1991.

Star Wars’ Billy Dee Williams Comes Out as Gender Fluid: ‘I See Myself as Feminine as Well as Masculine’