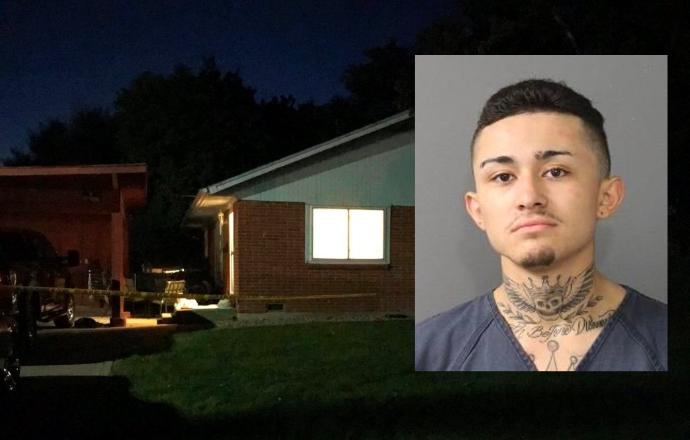 A son is struggling to forgive himself after shooting and killing his father during a drunken fight over the weekend, his grieving mother told 11 News. Crime tape at...
by Raquel Jayson October 8, 2019 1155 Views

A son is struggling to forgive himself after shooting and killing his father during a drunken fight over the weekend, his grieving mother told 11 News.

Crime tape at the scene of a deadly shooting during an alleged family dispute on Oct. 6, 2019; photo inset mugshot of Malechi Ortiz. (Photos: Pueblo Police Department)

Ortiz, 52, was a beloved church pastor who also ran a neighborhood barbershop, Roman’s Barber and Salon.

According to police, they received a frantic 911 call from Ortiz’s wife at 3:43 a.m., who said her husband had been shot while he and their 23-year-old son struggled over a gun. First responders were unable to save him and he died at the scene. Son Malachi Ortiz, 23, remained on scene and was taken into custody.

“He was loved by so many. So many,” she said of her husband, a lifelong Pueblo resident. “… It’s going to be very hard without him. He was a man that spoiled all of us. I mean, if you woke up at 2 o’clock in the morning and you wanted an ice cream, he would jump up and run to Loaf ‘N Jug and grab you an ice cream. That’s who he was.”

She told 11 News reporter Kasia Kerridge that her son was extremely drunk Sunday morning and didn’t know what he had done until it was too late.

“My son was very intoxicated, and where the firearm came into play, I cannot tell you. I was in the kitchen and I just heard a pop and when I ran into the living room they were tussling over the firearm … between the two of them, I was able to grab the firearm and take it off of him. And then my husband just collapsed after that.

She said she called 911 multiple times, unable to get through right away.

“Then 911 called back and paramedics got there, he was still breathing. He was fighting, he was fighting for his life.”

“He [Malachi] was unaware of what took place until he sobered up and told him what they were charging what they were charging him with. He’s having a very hard time. It was his Pops. He adored him and he’s struggling. He asked me to ask his sisters and his nieces and nephews for forgiveness, and he said to tell the family and the church family that he was sorry. It’s just, he’s struggling right now. It’s been very, very hard.”

Detectives continue to investigate what happened in the moments leading up to the shooting. The younger Ortiz currently faces second-degree murder charges and is being held in the Pueblo County Detention Center without bond.