Pastor Says He Is Healed From HIV, But He Will Not Be Taking The Test 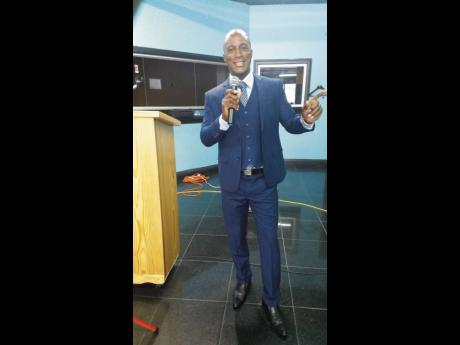 Pastor Devon Williams says he has been healed from HIV. However, he is yet to do the test.

Devon Williams, who now also goes by the name Apostle the Major One Prophet Success, said his life before Christ seemed to have taken all the wrong turns and light at the end of tunnel seemed very dark.

From being arrested, deported, and almost losing his life, Williams said he was able to turn all of that into good, with tertiary education, a ministry, and what he claims to be a body healed of HIV by God.

Though he could not foresee the reasons for the lows he experienced, the pastor believes that the episodes of his life happened as they should.

“I was in London, having got one month in the country, but I told myself that I would not return home until I could buy my house on the hill and own a business. I got a job sweeping street the following week, having left a sales job in Jamaica. I swept streets for three months, and during the time, I got a different job in a KFC restaurant as a security guard,” he said.

But the life he tried to settle into was disrupted when Williams said he was attacked by five men in the restaurant and retaliated by hitting one with a chair.

“I was later arrested and deported back to Jamaica. I was angry against God and everybody. I was saying to God, ‘Why this had to happen to me?’ not knowing that He had a plan for my life in Jamaica. I never saw what He wanted to do with my life,” he noted.

Two months later, Williams said he found himself back on a flight to London with a different identity.

“I was still saying to myself I had to make it in foreign because I was being led by Satan to pursue greed and selfish gains. When I returned, I got a job at a McDonald’s store to work in the kitchen, and I was attending school part time, pursuing a bachelor’s degree in computer technology.”

But as he tried to hide from the British police, resettle, and make something of his life, the pastor said he started feeling ill.

“… The authorities knew I had re-entered the country, and thus they were watching me, observing my activities, for the right time to arrest me with some crime, to give me a huge sentence. As a result, I was under stress. I was very fearful of the consequences of my actions. I was finding it difficult to sleep at nights and to eat anything significant. When I did, I had diarrhoea. I almost lost my mind. I was paranoid for a long period of time, and I was still refusing to seek medical attention.”

All this time, Williams had contracted HIV without knowing and said that he was on the brink of dying.

“It was not until I was almost dead I finally went to the hospital, and when I did, I remember the doctors surrounded me in a team, running all kinds of tests on me for the better part of that day. At the end of the day, it was revealed to me that I was HIV-positive.”

He continued: “In that moment, my life stopped. I felt as though I was slipping down a very dark deep tunnel without an end. I felt hopeless, lost. I gave up at that moment. I contemplated suicide. The devil was telling me that I could not make it so I should just end it all,” he said.

But amid the chaos, Williams said he heard a still small voice that represented the Holy Spirit, and a peace came over him.

“I prayed, and I gave my life to God subsequently,” he said. Williams, who said he subsequently returned to Jamaica and became part of the HIV clinic at a hospital, said living with the virus was only made possible through his commitment to God.

“Indeed, my faith increased steadily over the course of time that I was infected with HIV because I fasted regularly, spent significant amounts of time reading the Bible and praying and subsequently preaching the gospel after being spoken to by God to pursue a (bachelor’s) degree in theology with a minor in leadership and ministry, at the Jamaica Theological Seminary, after which I founded the S.I.P.-D.I.M. ministries”

But according to the pastor of the Success Supernatural Prophetic and Deliverance International Ministries in Portmore, St Catherine, not only did God deliver him from his struggles, but He has also healed him of HIV.

“It was on the 24th day of November 2020, on the second day of me embarking on an eight-day of fasting without food, during my time of consultation with Jesus, He revealed to me that I am now healed, and I should stop taking the medication, and I immediately stopped. But I had some reservations because I had tried stopping taking them before, and by the space of three days, I had was to start taking them again because I started getting sick again, but this time, He instructed me to walk, from my home in Westchester, while fasting without food. I would walk from my home, all the way through Garvey Meade, through Edgewater community, and through Passage Fort to my home, daily, for four days,” Williams said.

The pastor admits that he has yet to do a test to confirm what he believes is his negative status but has total belief that God has healed him and his strength and stamina are proof enough.

“I feel strengthened in my body that indeed I am healed. I feel very good that Jesus the God of the universe chose to heal me out of all the persons in the world who were affected with HIV for the last 18 years. But I am not special. Jesus has paid it all on the cross, so whoever will believe and have faith in Him, He will do the same for them. I will do the test when God says I am to do the test.”

Williams’ wish is that all who are in need of healing will go to God in prayer for deliverance.