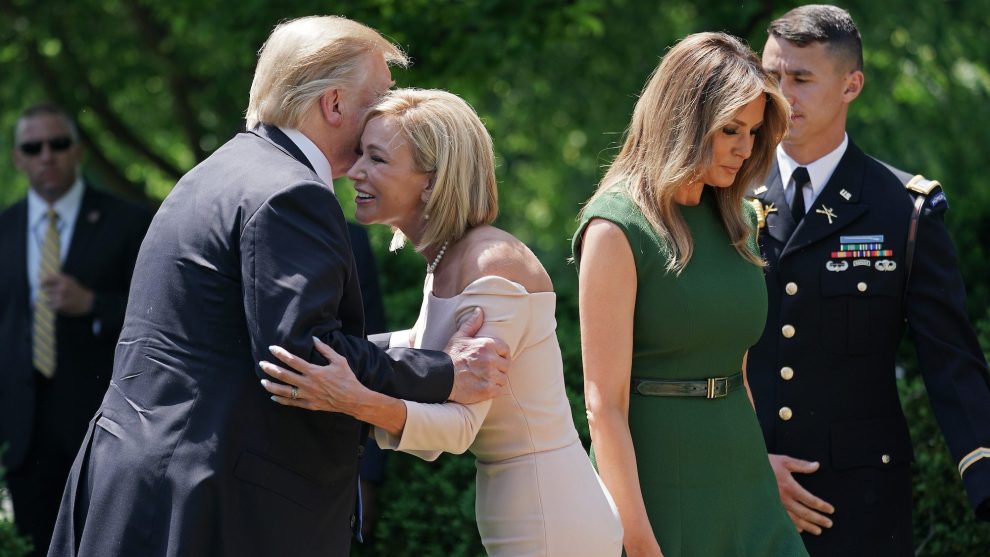 Support for President Trump has been consistently strong among evangelicals, with some calling him the best friend Christians have had in the White House. On the first Sunday since a...
by Raquel Jayson January 11, 2021 271 Views

Support for President Trump has been consistently strong among evangelicals, with some calling him the best friend Christians have had in the White House.

On the first Sunday since a mob of his supporters seeking to overturn President-elect Joe Biden’s election stormed the U.S. Capitol, a rampage that left five people dead, the messages from the pulpits of pro-Trump church leaders were as disparate as the opinions of the nation’s citizenry as a whole.

They included recitations of debunked conspiracy theories of who was responsible, calls for healing and following Christ instead of any other individual and sermons that made no mention of Wednesday’s chaos or its implications for the future.

Here is a look at what some were preaching to their flocks.

The Rev. Samuel Rodriguez, the president of the National Hispanic Christian Leadership Conference, who delivered a prayer at Trump’s inauguration and has also advised him, told his congregation Sunday that America needs to hear a message of repentance.

“We must all repent; even the church needs to repent. The American nation will be healed when the American church repents,” he said to some cheers and applause.

Rodriguez, the lead pastor of New Season, said he was praying for a season of “instead of”: “Instead of destroying property, building altars. Instead of confrontation, conversations. … Instead of many under fear, one nation under God.”

Brian Gibson, pastor and founder of His Church, spoke to his congregation and online viewers about his bus tour around the U.S. during the past month to speak with Trump supporters.

Gibson was onstage Tuesday at a Prayer to Save America event billed as a combination worship service and rally for Trump the day before congressional certification of the electoral votes. As he described the following day’s violence in Washington, Gibson questioned how easily the Capitol was breached, raising debunked assertions that antifa supporters were among the violent mob.

“So now I know some, some bad actors went in, and I believe potentially there were antifa up there. I think more and more I know there were antifa up there, insiders up there that started that action,” Gibson said, with no evidence. “And I also know that some Trump supporters followed their lead without a shadow of a doubt because you don’t get 2 million people together without having some radicals in the crowd or some simple people in the crowd that you could lead anywhere, right?”

The Rev. John Hagee of Cornerstone Church, a staunch supporter of Trump, did not mention the president by name but criticized the assault on Congress by what he called “a rebellious mob.”

“The Secret Service had to escort the vice president of the United States to safety out of the Capitol building. Gunshots were fired. Tear gas was deployed in the Capitol Rotunda. People were killed. … This was an assault on law. Attacking the Capitol was not patriotism; it was anarchy,” Hagee said.

“This is what happens when you watch a policeman shot and belittle his sacrifice for the public,” Hagee said. “Wake up, America! America and democracy cannot function without the rule of law. We back the blue.”

Paula White-Cain, a longtime spiritual counselor to Trump who served as a faith advisor in his White House, made a subtle allusion to the insurrection ahead of her Sunday sermon.

Calling the nation “deeply divided,” White-Cain condemned “lawlessness” and added that “my hope is never rested in any person, any man. My hope is in Jesus Christ.”

White, who delivered a post-election prayer service in which she called upon “angelic reinforcement” to help achieve victory, also reaffirmed her commitment to the 1st Amendment — an echo of the warnings from some conservatives this week that their freedom of speech was threatened.

The Rev. Tim Remington, the conservative Christian pastor of the Altar church, avoided specific references to Trump and the attack on the Capitol, but offered plenty of politically charged warnings.

“The next two weeks are probably the most important two weeks in the history of America,” said Remington, who in the spring led in-person services in defiance of a stay-at-home order issued by the governor. “I pray the army of the Lord is ready.”