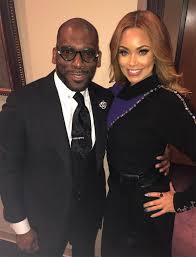 RHOP‘s Gizelle Bryant Dating Ex-Husband Who Cheated on Her: ‘Nobody Is What Their Mistakes Are’ Gizelle Bryant has a familiar flame in her life. On Sunday’s The Real Housewives of Potomac season...
by Jasmin Williams September 16, 2019 742 Views

RHOP‘s Gizelle Bryant Dating Ex-Husband Who Cheated on Her: ‘Nobody Is What Their Mistakes Are’

Gizelle Bryant has a familiar flame in her life.

On Sunday’s The Real Housewives of Potomac season 4 reunion, the EveryHue Beauty owner, 49, told viewers that she and her ex-husband Jamal H. Bryant were dating once again.

The former couple were married from 2002 to 2009, famously splitting after Jamal had an affair.

They remained on good terms, though, co-parenting their three daughters — Grace, 14, and 13-year-old twins Angel and Adore — even after Gizelle and the kids move back to Potomac. (Jamal is a megachurch pastor at the New Birth Missionary Baptist Church in Atlanta, Georgia.)

That friendship has now blossomed into something more.

Gizelle said at the reunion that the two have been seeing each other since last year, and that Jamal was “heavily pursuing” her.

“I am enjoying the pursuit and I am open,” she said. “There’s nobody who knows me like that man.”Jamal H. Bryant and Gizelle Bryant GIZELLE BRYANT/INSTAGRAM

The reality star went on to say that she has forgiven Jamal for his transgression.

“I look back and I just feel like, nobody is what their mistakes are,” Gizelle said. “I feel like he’s a different person, I’m a different person. So we’re baby stepping, but we’re moving in a direction that we want to move into. And I do love when we’re all together as a family.”

Asked how the kids have reacted to their relationship, Gizelle admitted they’re still getting used to it.

“You know what, they’re a little confused, to be honest with you, because they’ve never seen us together in that way,” Gizelle said. “We got divorced 12 years ago. So when he comes into town and he wants to take me out, they’re like, ‘Wait a minute, aren’t we all going?’ ‘Cause that’s what they normally do.”The Bryant family GIZELLE BRYANT/INSTAGRAM

Speculation had long spread that Gizelle and Jamal were back together, especially after photos of them together were shared to Gizelle’s Instagram.

In May on Watch What Happens Live with Andy Cohen, Gizelle promptly shut down the rumors.

“We’re very close. We have a great relationship. We’re great,” Gizelle said then. “But we’re not officially back together or anything like that. But we are great friends.”

But Gizelle’s fellow Potomac Housewives had continued to hear otherwise.

“I actually heard about it from someone in the front pew at his church in Atlanta,” Karen Huger said on Sunday’s reunion, telling Gizelle: “If anybody stands a chance at making it with you, that’s him.”

“I peeped that at [Cohen’s] baby shower,” noted Candiace Dillard. “We went out after and I said, ‘You and Jamal should start dating again. And you were like, ‘Why do you say that?’ You didn’t even blink.”

All were supportive of Gizelle after she confirmed the romance.

“I think it’s so great that you moved on and you forgave him and you’re in such a great place,” said Ashley Darby.

“It’s nothing like having your best friend who you know has your back and is supportive, regardless of what you’ve been through,” Robyn Dixon added.

Gizelle first opened up about Jamal’s affair on the premiere episode of RHOP back in 2016, calling him “a cheater, cheater, pumpkin eater” who “loved to hide his salami.”

Jamal, 48, had spoke out about the affair in a conversation with Roland S. Martin in 2013.

“I stepped outside of my marriage and had an extra-marital affair that ultimately ended in a divorce to a wonderful woman, not because anything was flawed in the marriage or in her, but in my own maturity,” he said.

“One of the critical things my ex-wife said to me was, ‘I didn’t divorce you because of the infidelity, I divorced you because I no longer recognized you. You went into a dark place, was mad with the world, and you were just worried about saving your career, not saving the marriage,’ ” he recalled.

The pastor went on to explain that he and Gizelle were in a better place.

“I think I became a better person post the divorce than I was in the marriage,” he said. “She and I are still great friends and are still able to operate in a meaningful way.”