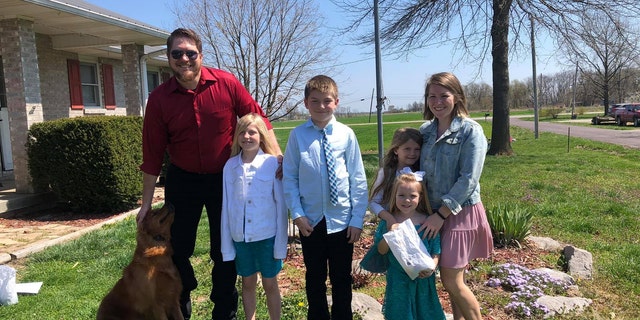 Church member receives kidney from his pastor: A ‘blessing from God’

Pastor Jack Coultas was an answer to Jeremy Whitham’s prayers

Jeremy Whitham hasn’t only gotten spiritual guidance and support from his pastor – he also received a lifesaving gift.

Whitham, 36, from Osceola, Missouri, found out his kidneys were failing in 2017 after he woke up blind one day.

Whitham has autism but he’s high-functioning and lives on his own, so when he wasn’t able to see, he called his dad, his mom, Connie Whitham said.

Her husband brought Whitham to the emergency room, where they discovered his blood pressure was dangerously high and his kidneys were failing because of diabetes.

Jeremy Whitham, 36, from Osceola, Missouri, found out his kidneys were failing in 2017. (Courtesy of Connie Whitman)

Connie told Fox that she had always known her son would develop diabetes as an adult because when he was born he developed hypoglycemia and had to have most of his pancreas removed at 1-year-old. She said she had no idea her son’s kidneys would also start to fail as a result.

Whitham spent two weeks in the hospital during which time his eyesight returned. He was then transferred to Saint Luke’s East Hospital to begin dialysis.

Whitham told Fox News that the whole process was difficult, particularly as he went through dialysis, which meant he couldn’t work or do many of the things he loves because he was so worn out by the treatment.

Soon after he found out that qualified as a donor recipient, his pastor, Jack Coultas, got tested to see if he would match to be a donor.  (Courtesy of Connie Whitman)

Connie told Fox that Whitham spent about two years on dialysis, all while looking and praying for a kidney donor.

Whitham said, “I hoped and prayed for a long time that I would get one, because I don’t like living like that.”

Connie said she, her husband and Whitham asked their friends and acquaintances to get tested to be kidney donors. Connie and her husband talked about it at their church and Whitham even handed out flyers when he went out.

Meanwhile, their pastor was already getting tested to see if he would be a match.

The test came back positive and doctors at Saint Luke’s Hospital of Kansas City successfully performed a kidney donation, giving Whitham one of Coultas’s kidneys, in January 2020. (Courtesy of Connie Whitman)

Jack Coultas, 35, the pastor at Park Grove Christian Church in Deepwater, Missouri, told Fox News that he started thinking about getting tested almost as soon as he found out that Whitham qualified to be a recipient.

“It just seemed like God had given me this opportunity to be able to share with him something that I had that Jeremy desperately needed,” Coultas told Fox. “Through prayer and talking with my wife, it just seemed like it was the responsible and right thing to do for me as a Christian, to at least initially find out if I could even be a donor, just seeing if we were even a match.”

Coultas got tested and the results came back positive for a match.

Now, Whitham is doing “much better” and told Fox he’s thankful his pastor was able to donate a kidney.

Whitham told Fox he’s “very, very thankful” his pastor was able to donate a kidney. Whitham is pictured with his family.  (Courtesy of Connie Whitman)

“His kidney was a perfect match for mine,” Whitham said.

“I feel like that’s a very good blessing from God,” Whitham added. “I’m just very, very thankful for everything.”

Connie said had Coultas not donated his kidney, her son might not have lived many more years, but now his health is in great shape and his diabetes is under control.

As far as Coultas is concerned, it wasn’t even a matter of being Whitham’s pastor, it was about being his “Christian brother.”

“I don’t think there was anything special about me doing it,” Coultas told Fox. “I think it’s part of basic Christian responsibility and duty to love, not just in patting people on the back, but actually stepping out and doing something to make a difference.”

Coultas told Fox he doesn’t think “there was anything special” about donating a kidney, instead saying: “It’s part of basic Christian responsibility and duty to love.” Coultas is pictured with his family. (Courtesy of Jack Coultas)

Ultimately, Connie and Coultas hope Whitham’s story encourages other people to get tested to be kidney donors.

“It’s such an incredible opportunity that is presented to a lot more people than they even recognize, that they can make such a difference in people’s lives,” Coltas said.