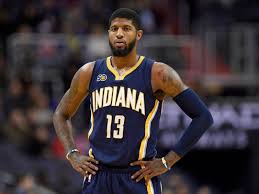 The NBA off-season is barely a week old and trade rumors are already flying, including those linked to Paul George, who has already reportedly informed the Indiana Pacers that he...
by Joy Smith June 19, 2017 484 Views

The NBA off-season is barely a week old and trade rumors are already flying, including those linked to Paul George, who has already reportedly informed the Indiana Pacers that he plans to opt out of his contract in 2018.

With George destined to depart from Indiana, the Pacers have begun reaching out to teams who would be willing to trade for the All-Star forward, including the Cleveland Cavaliers.

According to ESPN, the Pacers contacted the Cavs, who are willing to discuss a trade for George despite the fact that he could walk away at the end of next season to play for someone like the Lakers, a team that he has outwardly expressed a desire to play for.

“The Cavs are willing to enter into trade talks for George without any assurances he will commit to a long-term deal in Cleveland, a source familiar with the Cavs’ thinking told ESPN. Cleveland is confident its championship culture and overall atmosphere could sway George to want to stay after playing out the 2017-18 season.”

Of course, Cleveland’s biggest bargaining chips are Kevin Love and Kyrie Irving, both of whom are coming off All-Star season. And the Cavs aren’t the only team who are interested, as the Clippers are also reportedly trying to acquire George via sign and trade.

With PG-13 opting out of his contract in 2018, the Pacers reportedly reached out to the Cavs about a potential deal: https://t.co/4Dhuc6L2Vb pic.twitter.com/gvypdWXHZJ

The ante is up in Georgia’s Special Elections… Everything you need to know here!