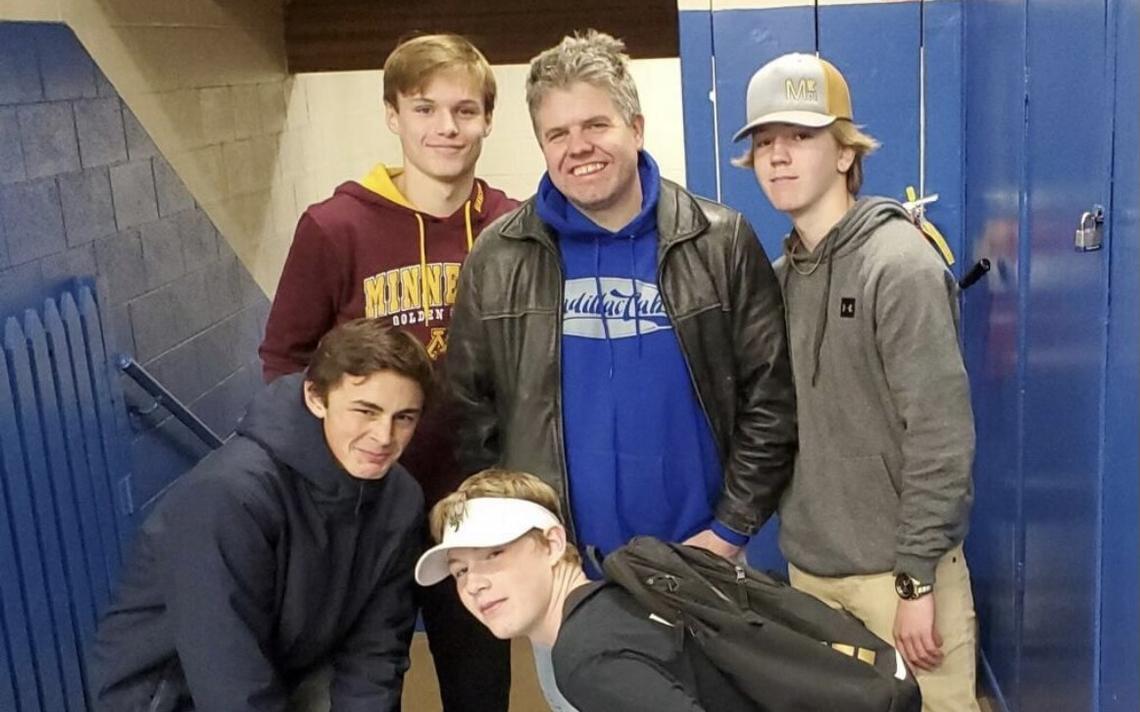 On Wednesday, March 23, Pastor Stew Carlson died unexpectedly at the age of 41, leaving the Silver Bay community reeling from the loss.

Anyone who has been to a Silver Bay Mariners sporting event in recent years may have noticed a very energetic man cheering the student-athletes on while jumping up and down and waving a big flag.

That man was super-fan Pastor Stew Carlson, a big supporter of the Mariners. Carlson died unexpectedly of natural causes at the age of 41 on Wednesday, March 23, leaving the Silver Bay community reeling from the loss.

“The community took it hard. Stew was a very big part of our community both at the school and in the entire community,” said William Kelley Schools Principal Joe Nicklay. “He had a huge positive impact on everyone that he encountered, especially with the youth groups and at our athletic events. He was one of a kind, that’s for sure.”

“We probably had the youngest team in the state this year. We were playing seventh and eighth graders in varsity,” said Silver Bay girls basketball coach John Sandstrom. “But after every game, after watching it online, Stew would call me and he would have something positive to say about each person on the team.”

Sandstrom said Carlson probably knew the name of every kid in town, and that’s what was special about him.

“He was their full-time cheerleader, whether it was on the court or in the classroom and in the community. He was there for the kids,” Nicklay said. “He really put his heart and soul into helping these kids and helping them develop in so many ways. He’s going to be missed.”

William Kelley High School sophomore Chase Dow, 16, is a member of the Sychar Lutheran Church and Carlson was his pastor since second grade.

“Stew was really close with our family,” Dow said. “I’m heartbroken to hear of his passing. I can’t quite grasp it yet.”

Dow plays football and basketball, and runs track, so he’s used to seeing Carlson on the sidelines cheering him on, which meant a lot to him and the rest of the students. Even after Carlson moved, Dow said, he would still try to come up for their games and meets.

“My favorite memory was when I was running the 4×8 relay last year … and as soon as I was passing the baton to my brother I looked over and I saw him screaming at the top of his lungs, cheering us on,” Dow said. “It was just a great moment.”

Silver Bay boys basketball coach Jeremy Schwarz said he loved seeing Carlson on the sidelines cheering for the students, but he was also very involved in the community.

“I live about a block away from the church in Silver Bay and he would walk by my house probably six times a day. He walked all over town to check in on people and talk to everyone he passed,” Schwarz said. “There was nobody in town that disliked the guy. He was impossible to dislike, and he was probably the best guy you’d ever meet in your life.”

Schwarz said when Carlson left there it felt like the town was missing something and as the news spread of his death, it was a somber day for Silver Bay.

“Everybody was shocked. He was only 41,” said Schwarz, who also works at the local grocery store. “Everybody is going to miss him. It’s a hard one to take.”

Schwarz said one of his favorite memories of Carlson happened one night after some of his basketball players stopped by his house after confirmation class.

“It was probably 7:30 or 8 o’clock at night and they came into the house all loud, and they said, ‘Hey coach, Stew bought us a basketball hoop for the parking lot outside the church so now we can play basketball at confirmation,’” Schwarz recalled. “I thought that was really cool, and that’s just how Stew was. He would do anything for pretty much anybody.”

Nicklay said the school is making plans to honor Carlson because “wherever we needed help he was always there.”