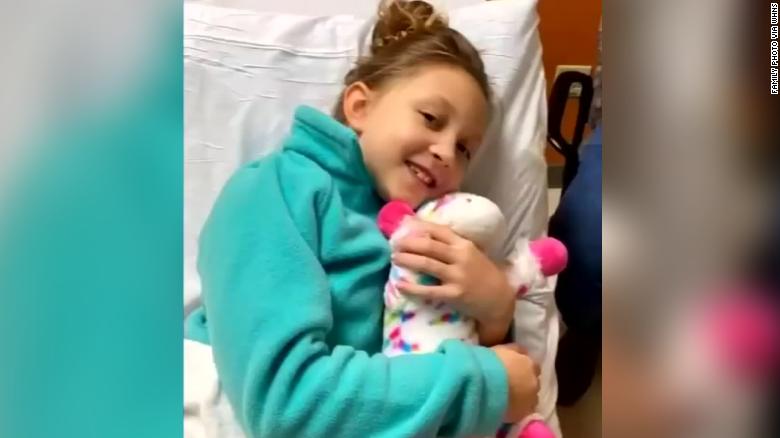 Our healthy little girl, 7, died one minute into routine surgery to have her tonsils removed

A SEVEN-year-old girl has died just one minute into a routine op to have her tonsils out. Paisley Cogsdill, from Greenwood, South Carolina, was having surgery on Friday when...
by Zach Freeman February 26, 2020 175 Views

A SEVEN-year-old girl has died just one minute into a routine op to have her tonsils out.

Paisley Cogsdill, from Greenwood, South Carolina, was having surgery on Friday when her heart stopped suddenly.

Doctors desperately tried to revive the schoolgirl but tragically she couldn’t be saved, CBS News reported.

A post-mortem examination is due to be carried out to determine her exact cause of death.

The schoolgirl was having the operation because she snored in her sleep.

But otherwise she was perfectly healthy, her relatives CNN affiliate WHNS.

Her grandmother Mary Beth Truelock told the broadcaster: “Going into surgery, she had no fear.

“She was smiling and happy. Nothing was wrong.”

Mary added: “You don’t understand why these things happen but we know it was God’s plan and that’s the only thing that can get us through.”

In her obituary, Paisley was described as having an attitude full of joy “in everything she did, from playing T-Ball and Softball to performing Hip-Hop dance routines and gymnastics programs with her friends at the Dance Shop and Dance South.”

A celebration of Paisley’s life is due to take place tomorrow.

Friends have set up a GoFundMe page to help the family cover funeral expenses.

Tonsil surgery, known as a tonsillectomy, is one of the most common surgical procedures performed on children.

It is performed under a general anaesthetic and usually patients are able to leave the same day.

The operation is usually suggested for those who have recurrent episodes of tonsillitis or quinsy – an infection of the tonsils which can cause a severe sore throat, high temperature and difficulty swallowing.

Tonsils may need to be removed it they are swollen and cause snoring or make it harder to breathe or swallow – especially at night.

There are some risks associated with the surgery, including a sore throat, bleeding and infection.

According to the NHS, there is also a risk of death with any operation – however this is extremely small for this type of operation.