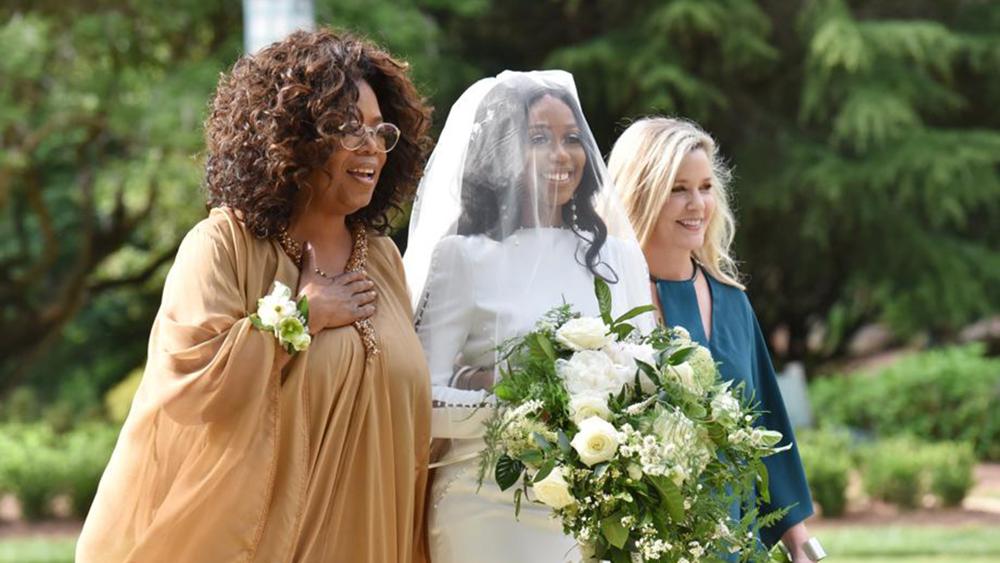 Oprah walked former student down the aisle at her wedding!

That much was clear as Lizhuwani Gloria Rapalalani made her way to the groom, flanked by media mogul and former talk show host Oprah Winfrey and mentor Elizabeth Burns...
by Joy Smith May 13, 2019 767 Views

That much was clear as Lizhuwani Gloria Rapalalani made her way to the groom, flanked by media mogul and former talk show host Oprah Winfrey and mentor Elizabeth Burns from the Savannah School of Art and Design.

Austin Nelson had predicted he might cry when the time came to marry Gloria and he did. Everyone did.

From the moment Winfrey and Burns declared they were giving Gloria in marriage, the tears flowed and boxes of tissue followed Saturday at Villa Christina in Brookhaven where the couple vowed to love and cherish each other.

From the moment he laid eyes on her, Nelson said there was something about Gloria, a former student of Winfrey’s girls’ school in South Africa, that stirred his spirit. He was passing through the student center and she was getting lunch at SCAD.

Oprah Winfrey holds Gloria Rapalalani during Rapalalani wedding to Austin Nelson at Villa Christina on Saturday, May 11, 2019. Rapalalani was one of the students from the first class of the Oprah Winfrey Leadership Academy for Girls.
Photo: HYOSUB SHIN / HSHIN@AJC.COM

Nelson was in his second year at SCAD majoring in fashion design. Gloria, he thought, was new to the Atlanta campus.

“My mouth hit the floor,” he said. “She was the most beautiful girl I’d ever seen.”

A week would pass before a mutual friend introduced them in 2013 and he found the confidence to ask her for a date. She agreed, then canceled but Austin asked again.

At dinner he told her almost everything about himself. He grew up mostly in Detroit, Michigan. He had a younger sister. Gloria told him she was studying fashion, too, but that was about it.

As they finished dinner, Austin invited her to his new apartment on the east side of Atlanta.

Oprah Winfrey reacts during the wedding of Gloria Rapalalani and Austin Nelson at Villa Christina on Saturday, May 11, 2019.
Photo: HYOSUB SHIN / HSHIN@AJC.COM

Gloria obliged but the minute she saw how perfect it was, it scared her. Everything was in place. Austin, she thought, was a “neat freak” who suffered from obsessive-compulsive disorder.

“Gloria had it all wrong,” Austin said.

The apartment seemed perfect because he had only been there 24 hours. In another day or two, chaos would ensue.

Nearly a year and a half would pass before they’d talked again.

Why don’t you ever reach out, she asked him one day.

Before long, they were spending hours together talking. Gloria was finally opening up, sharing with him details of her journey from South Africa to Spelman College and then SCAD and the family she left behind.

The Oprah Winfrey Leadership Academy for Girls which opened in January 2007 in the small town of Henley on Klip, south of Johannesburg, South Africa, to give girls from deprived backgrounds a quality education, had changed her life. 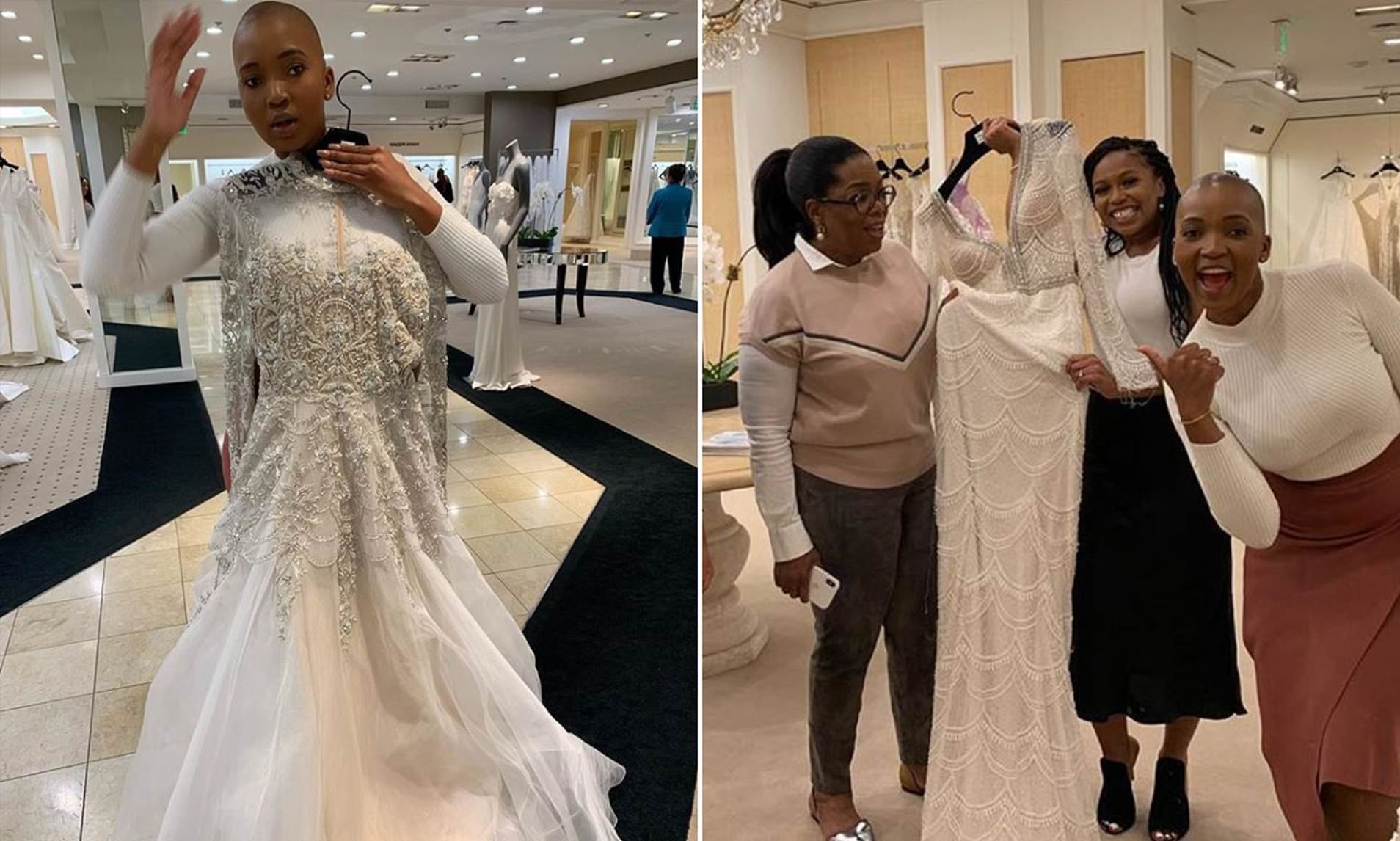 At the time, Winfrey called the school, a promise to herself and to former South African President Nelson Mandela, “the fulfillment of my work on Earth.”

Gloria was among the first class of girls to graduate from the academy. She transferred to SCAD in 2013 after spending her first year at Spelman.

As time went on, Austin became more intrigued but he’d have to make a lot of adjustments if he were ever going to capture her heart. For starters, he couldn’t just pick up the phone and invite her to lunch. Gloria didn’t particularly care for spontaneity. She liked to plan.

“I had to show her that I wasn’t playing games,” he said.

Austin recalibrated and on June 5, 2016, Gloria agreed to join him for a planned dinner at Vickery’s Bar and Grill. That night Austin was convinced he was dealing with an “emotionally intelligent” woman who shared his faith. That meant it wasn’t enough to be honest, he had to keep his word.

Something special was stirring in Austin’s heart. Gloria’s, too. He was in love. He wanted to spend the rest of his life with her.

Austin graduated in 2017 and after an internship at Nike, was offered a position designing men’s apparel in the corporation’s Portland, Oregon office. Gloria graduated the following year and was working in Los Angeles. It was getting harder for them to see each other.

Austin was on business in Europe early this year when it hit him, he had to make his move. They’d talked about marrying one day. Now he was searching the internet for the perfect engagement ring.

He found the perfect spot to propose in the rose garden at the Getty Villa near Malibu and waited for his mom to deliver Gloria.

Oprah Winfrey reacts as she mingles with wedding guests during the wedding of Gloria Rapalalani and Austin Nelson at Villa Christina on Saturday, May 11, 2019.
Photo: HYOSUB SHIN / HSHIN@AJC.COM

As tears clouded his eyes, Austin told his love how much he needed her in his life. He got down on one knee and pulled the ring from his jacket pocket. Gloria started to cry.

“Will you marry me,” he asked her, as his family watched.

Are you sure, she asked.

Saturday before nearly 50 witnesses, including about 15 of her classmates from Winfrey’s academy, she said it again.

When the Rev. Scott Copeland pronounced the two husband and wife, the classmates cheered.

“Africa’s in the house,” Winfrey quipped.