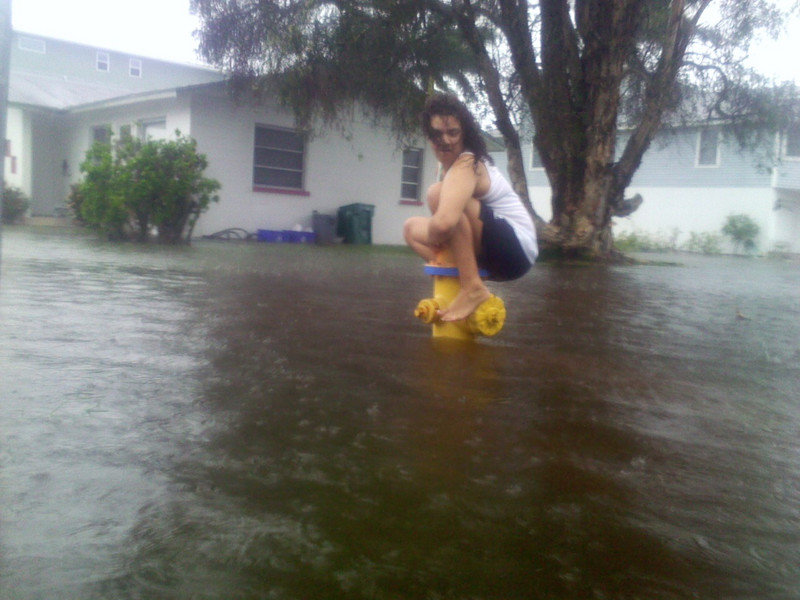 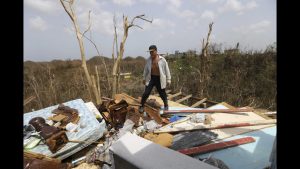 Dare County Emergency Management Director Drew Pearson said in an email that the high tide early Wednesday flooded some roads in the area and travel remained hazardous. Pearson said the worst problems were on Hatteras Island, where more than 10,000 visitors left under an evacuation order earlier this week.

Pearson said no injuries had been reported.

Already, the ocean washed over parts of N.C. 12, the main road running along the Outer Banks.
The National Weather Service reported winds had increased to 70 mph (112 kph) by daybreak, about 15 miles higher than earlier in the morning.

A fine rain was falling, with patches of blue sky occasionally showing through. Police set up a check point to block all traffic heading south on N.C. 12 except for residents and reporters. Evacuations remained in place for visitors on the islands of Hatteras and Ocracoke.

As the winds picked up, waves crashed up to and beyond ocean-front homes on the stretch of the highway between the unincorporated communities of Rodanthe and Avon.

“The ocean is angry,” Helena Stevens with the Ocracoke Civic and Business Association told the Virginian-Pilot of Norfolk earlier.

The water began washing on Tuesday across sections of N.C. 12, the only road to and from Hatteras Island. A layer of wet sand remained on the road on Wednesday.

Chip Stevens owns Black Beard’s Lodge, a 38-unit hotel on Ocracoke. He said his main concern is that the highway remains passable, both on Hatteras and Ocracoke islands, because most businesses, tourists and supplies travel down that road and across on a ferry.

The weather affecting the Outer Banks, among the most fragile islands in the continental United States, is the latest swipe from this year’s devastating hurricane season.

The islands are expected to get only a glancing blow as weakening Tropical Storm Maria was forecast to move about 150 miles (240 kilometers) offshore Wednesday. But officials warned that severe beach erosion was likely there and along the mid-Atlantic coast.

Texas, Florida, several small Caribbean islands and Puerto Rico have all seen worse this year. Puerto Rican officials said electrical power may not be fully restored for more than a month after the grid was destroyed by Maria’s Category 4 hurricane winds last week. More than 3 million of the island’s U.S. citizens still lack adequate food, water and fuel.

In North Carolina, officials warned the surge of ocean water and waves from Maria would overwhelm island sand dunes from both sides Wednesday. Bulldozers were already in place to push the sand off Highway 12 when water subsides.

Maria is predicted to erode more than half the dunes along North Carolina’s 300-mile (485-kilometer) coast. Beaches in Maryland and Virginia could fare even worse, with two-thirds seeing erosion and the ocean washing over the dunes on one-third of them, according to the U.S. Geological Survey.

The forecast flooding forced more than 10,000 visitors to leave their beach vacations on the North Carolina barrier islands of Hatteras and Ocracoke. On Tuesday, water was already punching through dunes and under homes built several feet above the ground.

The evacuation orders didn’t apply to local residents, who are now resigning themselves to economic losses as well as more flood damage after a double pounding by last year’s tropical weather.

Sarah Midgett lost her car during Hermine and her home was severely damaged by Matthew’s floods. After the dunes got hit by Jose this month, Maria pushed through the weakened natural barrier Tuesday, washing over parts of Hatteras.

“It’s insane how much the beach has eroded,” said Midgett, who moved many of her belongings off her floor, just in case.

Maria weakened to a tropical storm Tuesday afternoon as the winds finally dipped below hurricane strength for the first time in nine days.

As of 8 a.m. Wednesday, Maria was centered about 155 miles (249 kilometers) east of Cape Hatteras.

A tropical storm warning was in effect for the North Carolina coast from Bogue Inlet to the Virginia border, and meteorologists said a storm surge could hit from Ocracoke Inlet to Cape Hatteras.

Hurricane Lee, meanwhile, was gradually strengthening far off in the open Atlantic, where it was expected to swing north and east again before tropical storm-force winds reach Bermuda.

“Spirit of the Lord” is trending on Twitter with over 4,000 Tweets!