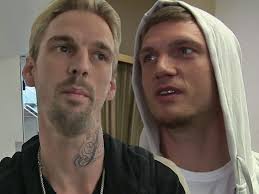 Nick Carter Files A Restraining Order Against His Brother Aaron Carter Whew! We’re hoping all can be resolved with the Carters on this one, but it sounds like this...
by Jasmin Williams September 18, 2019 185 Views

Whew! We’re hoping all can be resolved with the Carters on this one, but it sounds like this family feud is pretty serious. Backstreet Boys’ Nick Carter confirmed that he has filed a restraining order against his little brother Aaron Carter, alleging that Aaron has thoughts about harming Nick’s pregnant wife.

Nick wrote in a lengthy message on Twitter that he and his siter Angel are taking protective measures against Aaron, who has had trouble with subtance abuse and mental health over the years.

“After careful consideration, my sister Angel and I regret that we were required to seek a restraining order against our brother Aaron today. In light of Aaron’s increasingly alarming behavior and his recent confession that he harbors thoughts and intentions of killing my pregnant wife and unborn child, we were left with no choice but to take every measure possible to protect ourselves and our family. We love our brother and truly hope he gets the proper treatment he needs before any harm comes to himself or anyone else,” Nick tweeted.

Aaron responded to the restraining order in a series of tweets expressing his anger and hurt. Aaron says he’s done with Nick forever and revealed that he thinks Nick is really upset with him because he went live on social media with one of the women accusing his big brother of sexual assault.