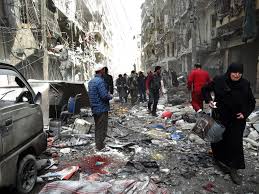 A video posted by Orient News appears to show its Damascus bureau chief bloodied in the course of reporting on nearby airstrikes. In the video, Syrian reporter Yaman al-Sayed...
by Joy Smith January 4, 2018 363 Views

A video posted by Orient News appears to show its Damascus bureau chief bloodied in the course of reporting on nearby airstrikes.

In the video, Syrian reporter Yaman al-Sayed can be seen speaking into a microphone on a gray, debris-covered street in the southwest city of Irbin, east of Damascus, on Tuesday. Sayed is cut off mid-sentence as someone unseen yells, a loud thud is heard and the camera suddenly drops.

The next thing the viewer sees is Sayed being carried into the back of a van, with blood on his forehead and nose and in his left eye. At first, it’s unclear how serious his injuries are, but by the end of the video, Sayed tells the camera, “Thank God, I am fine … and God willing, we will continue to report the news until the Assad regime and all its supporters fall.”

In an interview on Thursday, Sayed said a particle from a nearby blast entered his nose. He said he required 50 stitches in his head and surgery for a broken leg.

Orient News is a Dubai-based, opposition-aligned television station reporting on the conflict in Syria. Sayed said it has bureaus in Washington, Turkey, Jordan, Lebanon and throughout Syria.

The Syrian Observatory for Human Rights, a Britain-based monitoring group, reported Wednesday that two people had died in the Irbin area as a result of an “aerial bombardment.”

Though the images in the video are shocking, civilian bloodshed is not rare in the Syrian conflict, which has lasted almost seven years.

The Syrian Network for Human Rights reported that 10,204 civilians were killed in the conflict last year, noting that the real figure was probably much higher but that a lack of information from armed opposition factions, government forces and Islamic State militants complicated the tallying efforts.

Sayed said the treatment for his injuries was slowed by shortages in the area.

The International Committee of the Red Cross reported in December that fighting in Eastern Ghouta had led to food and fuel shortages and prevented civilians from receiving medical care. Residents of Eastern Ghouta have spoken to The Washington Post about the devastating effects of a government blockade on their families.