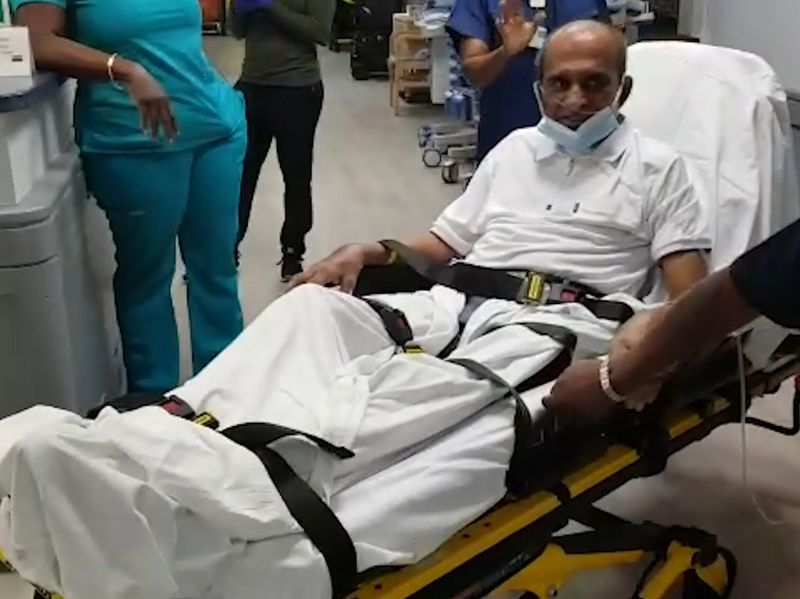 Just when it seemed the Rev. Benjamin Thomas didn’t have a prayer of beating COVID-19, his doctor still had one left. The Queens pastor was knocking on heaven’s door...
by Zach Freeman July 10, 2020 255 Views

Just when it seemed the Rev. Benjamin Thomas didn’t have a prayer of beating COVID-19, his doctor still had one left.

The Queens pastor was knocking on heaven’s door in mid-April after a crippling case of coronavirus, eventually spending 54 days on a ventilator and six weeks in a medically-induced coma. The immigrant from India was wasting away, his lungs failing and his body weight down more than 50 pounds.

Dr. Robin Varghese, while ready to throw up his hands, instead raised them to a higher power.

“I really just told God there was nothing else I can offer him, he’s gotta take over,” Varghese recounted in a video released Thursday by Mount Sinai Hospital. “We’ve given him everything that modern medicine can throw at him.”

And miraculously, the pastor at the Queens Church of God began to recover. Thomas finally returned to his East Meadow, L.I., home on July 2, convinced a higher power was still looking over him.

“The whole team said there is no hope, they fully gave up on me,” Thomas recounted. But once Varghese asked for divine intervention, everything seemed to improve.Advertisement

“I turned, I changed, I started to respond to the medicine,” said Thomas.

The pastor was sideswiped by COVID-19: Healthy one moment, then hit hard with symptoms, and quickly on a ventilator at the Nassau University Medical Center. Doctors soon feared the religious leader who came to America from India more than 30 years ago would not survive.

“They were losing hope, and his family reached out to me and asked if there was anything we could do to help him,” recalled Mount Sinai’s Varghese, who runs the cardiovascular surgery ICU that became a COVID unit at the height of the pandemic. Just moving the pastor to another hospital was a life-threatening event because Thomas was on maximum oxygen support.

“Three times the ambulance could not take me, because each time they removed me from the ventilator, my heart rate would go down,” Thomas told the Daily News.

Once he finally reached Mount Sinai, things were looking grim by mid-April.

“He was in the worst shape, and many of our team members who were rooting for him, were also losing hope, as was I,” said Varghese in the video.

And then, as Thomas recounted, “the doctor prayed to God.”

By the middle of May, as Varghese recounted in the video, Thomas “made slow, very slow but steady progress.”

Get updates on the coronavirus pandemic and other news as it happens with our free breaking news email alerts.

The pastor cited a second source of inspiration: His wife’s bedside presence when Mount Sinai finally allowed her to visit. Thomas said seeing her again was a huge, instant boost to his recovery.

“You may call it coincidence,” he said. “I call it a miracle.”

His wife would spend two to three hours a day by his side, helping speak with other family and friends through video chats.

Last week, the man of God was finally back in his own house. While he still struggles, Thomas said he feels better all the time. He can’t go upstairs to his bedroom just yet, since his heart starts racing after only a few steps. But his progress is astounding given his prognosis just four months ago.

“It just goes to show the power of God,” said Mt. Sinai’s Chaplain Rocky Walker, who also appeared in the video.

Some Pastors Are Requiring Congregation To Wear Mask In Church