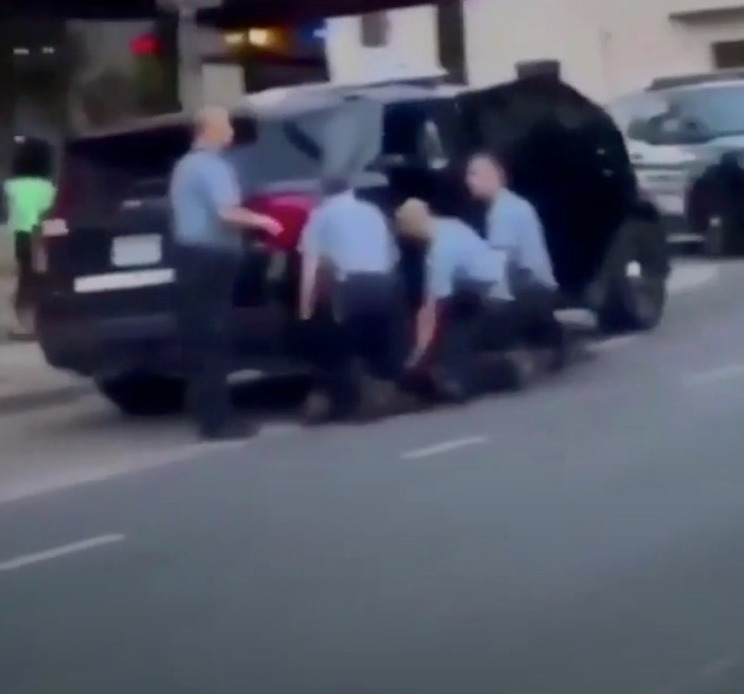 A NEW video appears to “show multiple cops pinning George Floyd down” as he begged for air during his arrest. View this post on Instagram This angle of the...
by Zach Freeman May 29, 2020 591 Views

A NEW video appears to “show multiple cops pinning George Floyd down” as he begged for air during his arrest.

This angle of the video is the reason most are not pleased with one arrest. #justiceforgeorgefloyd

The 46-year-old died on Monday in Minneapolis, Minnesota, after Officer Derek Chauvin was filmed kneeling on his neck during an arrest, while the black man shouted “I can’t breathe.”

However, now new footage has emerged that could show multiple officers kneeling on Floyd during his arrest on Monday.

In the 18-second clip, obtained by NBC, four cops can be seen surrounding the man, with three of them kneeling down.

It is unclear in the video whether the three officers are kneeling on the man.

The man on the floor can be heard begging the officers and crying out that he can’t breathe.

The Sun has approached the police department for comment.

The new footage was aired live on TV while the anchor was conducting an interview with Minnesota’s Attorney General Keith Ellison.

“But as I see that video, it looks like he is in a helpless position, handcuffed, without any ability to move.

“He’s pleading with the officers to bring some relief to him, now that he’s clearly within their custody.

“So that’s what I see in that video.”

On Thursday evening, Hennepin County Attorney Mike Freeman was asked about a charging decision for the officers involved.

However, Freeman deferred, saying instead that it would be a “violation of my ethics” to do so.

“My job in the end is to prove [Chauvin] violated a criminal statute, and there is other evidence that does not support a criminal charge,” Freeman said.

“I will not rush to justice because justice will not be rushed,” he added.