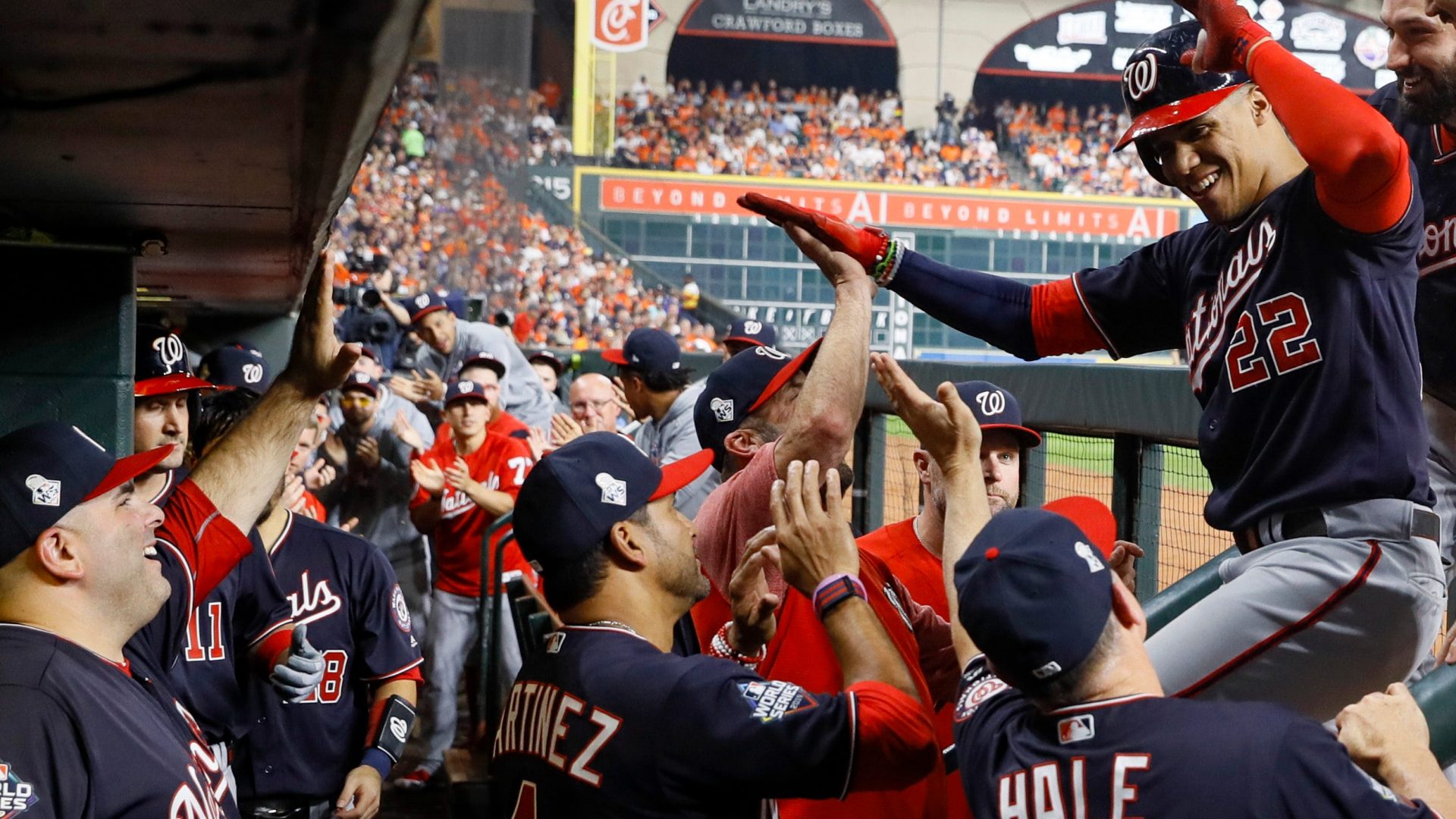 “You guys cured my heart … tonight I'll celebrate with my boys, because WE are the World Champions!” Davey Martinez delivers a heartfelt celebration speech. pic.twitter.com/7glSRka9u0 — MLB (@MLB)...
by Raquel Jayson October 31, 2019 321 Views

“You guys cured my heart … tonight I'll celebrate with my boys, because WE are the World Champions!”

The Washington Nationals defeated the Houston Astros, 6-2, in a winner-take-all Game 7 to capture their first World Series title in franchise history on Wednesday night at Minute Maid Park. For the first time in MLB postseason history, the visiting team won all seven games in a series during the 2019 Fall Classic.

The Astros carried a 2-0 lead into the seventh inning, but the relentless Nats — who trailed in all five elimination games they faced this postseason — struck for three runs in the seventh.They took a 3-2 lead on homers from Anthony Rendon and Howie Kendrick, who came up clutch once again during this miraculous October run.

In the seventh inning, Houston starter Zack Greinke gave up a one-out solo homer to Rendon. It was just the second hit Greinke allowed, but the Astros starter was done for the night after issuing a walk to Juan Soto, the next batter. Astros manager AJ Hinch called on reliever Will Harris, who Kendrick took deep off the foul pole in right field. The Nats tacked on insurance runs in the eighth (Juan Soto RBI single) and ninth (Adam Eaton two-RBI single).

The @Nationals #WorldSeries win was one of the most improbable in history.

They had the worst record through 50 games (19-31) of any champion. pic.twitter.com/xqyErbgRZA

The Astros scored their two runs off Nationals starter Max Scherzer. Houston took the lead in the second inning when first baseman Yuli Gurriel started the frame with a solo home run to left field. Carlos Correa added an RBI single off Scherzer in the fifth to double Houston’s lead.

The Astros chased Scherzer after five innings. Scherzer’s final line: 5 innings, 2 runs, 7 hits, 3 strikeouts, 4 walks. He threw 103 pitches (58 strikes). Scherzer was scratched from his scheduled Game 5 start due to neck and back spams but battled back to pitch in Game 7.

CBS Sports will have more on this breaking news story. Our staff was with you the entire way, updating this post with highlights, analysis and more. You can relive Game 7 below.

Domestic Violence: Woman Murdered By Ex-Boyfriend After Threatening To Leave Him! Prayers For The 2 Small Children Behind Left Behind