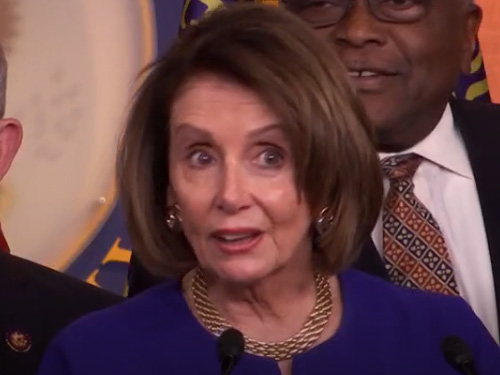 Vivian Ho in San Francisco (now) and Joan E Greve in Washington and Lauren Aratani in New York (earlier) If you’re just tuning in today, the buzzwords of the last hour or so are “third-rate...
by Zach Freeman October 16, 2019 344 Views

If you’re just tuning in today, the buzzwords of the last hour or so are “third-rate politician”, possibly “third-grade politician”, “a very serious meltdown” and “world’s most overrated general”. All great Halloween costume ideas!

However, it should be noted that there is some dispute over the insult in question:

The White House responds to House Speaker Nancy Pelosi and her description of President Trump having a “very serious meltdown”:

Unlike many news organisations, we chose an approach that means all our reporting is free and available for everyone. We need your support to keep delivering quality journalism, to maintain our openness and to protect our precious independence. Every reader contribution, big or small, is so valuable.

According to multiple reports, President Trump lashed out at former secretary of defense Jim Mattis – a retired Marine Corps general.

Hey all, Vivian Ho with the west coast bureau here. Let’s see where the rest of today takes us.FacebookTwitter

That’s it from me today. The Guardian’s west coast team will take over the blog for the next couple of hours.

Here’s where the day stands so far:

The Guardian team will have more on the news of the day, so stay tuned.FacebookTwitter

According to a letter obtained by a Fox Business reporter, Trump wrote a letter last week to Turkish President Recep Tayyip Erdoğan urging him to avoid a humanitarian disaster in Syria.

Trump concludes the letter: “Don’t be a tough guy. Don’t be a fool! I will call you later.”

The White House confirmed the letter’s authenticity to multiple reporters, and Trump referenced it earlier today when asked whether he was surprised by Erdogan’s actions. But one New York Times reporter expressed skepticism about when the letter was sent.

An ABC News reporter noted that the Syria meeting marked the first face-to-face interaction between Trump and Nancy Pelosi since the House speaker formally launched an impeachment inquiry against the president late last month.