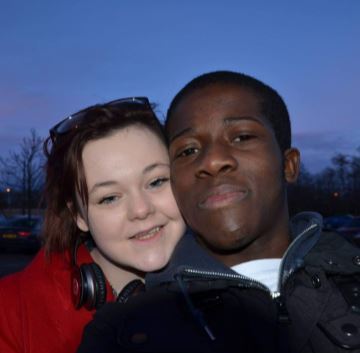 Dion House, 23, was terrified when Burton Assell, 26, threatened her with a kitchen knife, saying ”one of us will die today” as he tried to throttle her.

Dion, from London, who’s mom to their daughter, four, broke off the relationship in January 2016 after three years together.

But Assell refused to accept it was over and bombarded her with calls and texts – even turning up at her house on Valentine’s Day.

When Dion, an office worker, refused to get back together, Assell posted intimate pics on social media and five different escort websites, as well as sending them to mutual friends.

He even posted a sex tape he had secretly recorded without Dion’s permission, and plastered her phone number and email address on the sex sites.

The horrified mom only realised what he’d done when she started receiving dodgy calls from strangers looking to book her ‘services’.

Dion waived her right to anonymity, for an exclusive chat with Fabulous Digital. She said: ”It makes me sick to think he could post sexual pictures and videos to people I know – and on escort websites too.

“It hit me really hard, it was the worst invasion of my privacy I could ever imagine.

”He’s sick sharing that stuff and did it purely out of spite because he could no longer get his own way with me.

”I’ll never forget what he did to me, but I pride myself in being a really amazing mum and doing everything I can to overcome the past.”

Dion has since moved to the coast but is too scared to disclose her exact location. She’s been left psychologically scarred by the ordeal.

She met Assell in April 2014, when she was 18. He hassled Dion for a date and they soon became an item. She moved in with his family in North London and they had a daughter.

But despite his persistence in securing a relationship, Dion says Assell quickly became an “unreliable and controlling partner”.

She said: ”He would tell me what to wear, who to speak to, when and where I could go out. It was really draining and turned into mental torture.

”I was having our baby, I felt vulnerable and alone. He would be really rubbish for a few weeks and then beg my forgiveness.

”I never knew where I stood with him. I had tried to leave him a few times before but he’d play various cards and I’d always go rushing back.

”He did virtually nothing to help with the pregnancy, contributed as little as possible financially and was emotionally unavailable.

”Once our little girl was born he got even worse and I eventually decided to move out.

”Becoming a mom had changed my priorities and I wasn’t prepared to mess about waiting for him to grow up any longer.”

After leaving London for Surrey – where she got her own flat – Dion began to try and rebuild her life.

In December 2015, Assell’s family took their daughter to Africa to meet their extended family, while Burton stayed at the family home.

He persuaded Dion to travel to London to “look after him”, claiming he was ill.

As soon as she arrived, her ex turned nasty, shouting and waving a knife around.

”His whole demeanour changed in a second and he told me to ‘get out’ and that I’d ‘ruined everything’,” Dion said.

He held the knife up to my throat while trying to strangle me with his free hand. He said ‘one of us dies today’Dion House23

‘He started talking about where to cut to make sure the person properly ‘bleeds out’ and then shut himself in his bedroom.

”I wasn’t scared of him as I thought he’d never harm me, so I stayed to make sure he didn’t hurt himself.

”I went to the door to try and calm him down but he went nuts, dragged me in the room and held the knife up to my throat while trying to strangle me with his free hand.

”He said ‘one of us dies today’ and looked like he really meant it.

”He’s much stronger than me and I was terrified – he’d finally flipped. I kept thinking what would happen to my daughter if he killed me.

”Then he bashed my head against the wall, grabbed me by the hair and dragged me through the house and down the stairs.

”Even after all of that, I was worried about him. I was concerned that he was all alone in the house with that knife in the state he was in, so I called 999.”

The police came but were unable to do anything. Scared about getting Assell into trouble, Dion didn’t tell them what he’d done.

She travelled back to Surrey and resolved to call things off for good, determined not to ”fall for his tricks” ever again.

Dion said: ”When he held the knife to my throat, I was terrified for my life.

”After that I left him for good and thought I could get my life back on track. Looking back now, I think how naive I was to imagine he’d let me go that easily.”

Dion was bombarded with constant calls and texts begging for forgiveness. Assell even turned up at her house at 2am on Valentine’s Day 2016.

Dion refused to let him in, so Assell resorted to desperate measures to get her attention.

In many cases, it involves someone trying to shame their ex-partner.

Dozens of celebrities have also had intimate pics posted online by hackers.

It was made a specific crime in 2015 and people face two years in jail if found guilty.

Dion said: ”I was livid, he’d woken me up and scared me, I told him to go away.

”All the pics he had were from years ago. Knowing him he was just waiting to use them against me, I’m annoyed with myself for ever trusting him.

”I had no idea he had a video of us having sex, which makes it even worse. He sent the video to a mate of mine and then posted it on social media.

”He also put various pics of me all over sex sites online and included my actual phone number.

”The first I knew about it was when I was inundated with messages from pervs trying to book a night with me.”

Dion went to the police, who arrested Assell.

On August 20, a jury found him guilty of making threats to kill, disclosing private photos and stalking after a trial at Guildford Crown Court.

He was handed two consecutive 12 month prison sentences, suspended for a year, as well as a four-month suspended sentence for stalking.

Sentencing, Judge Robert Fraser admitted it was “unusual” to pass a suspended sentence in this sort of case, but said Assell’s deteriorating medical condition and good behaviour since the offence allowed him to make an exception.

He said of Dion: “It is very clear from her victim personal statement the publication of those private images had a deeply significant effect on her.

”She has now had to move house, she is isolated, and that’s the result of what you did and your actions. Clearly you intended to maximise her distress and humiliation.”

Where to get help

Have your intimate images been shared without your consent?

Dion, who waited two years for the case to go to trial, said: “It was a joke really.

“He kept getting the case pushed back due to his health and when it was finally seen in court he was given a suspended sentence – so he managed to avoid any jail time for everything he did to me.

”Not only that, but he still stalked and harassed me whilst out on bail and claiming to be too sick for the court case.

”He wouldn’t leave me alone, so I moved far away. My daughter and I live near the seaside now, it’s absolutely lovely.

”If it wasn’t for our daughter, I would wish I’d never met him. But she really is the silver lining to it all.”