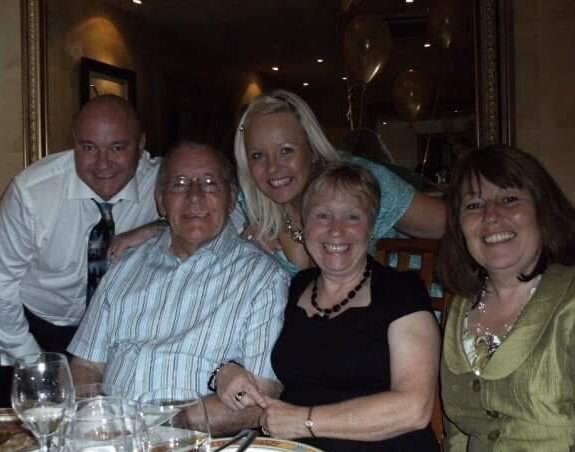 MAVIS Eccleston held her beloved husband’s hand tightly and reminded him of their first date, 60 years ago, as he took his last breaths beside her.  The couple were both...
by Zach Freeman January 19, 2020 313 Views

MAVIS Eccleston held her beloved husband’s hand tightly and reminded him of their first date, 60 years ago, as he took his last breaths beside her.

The couple were both in hospital after trying to kill themselves in a suicide pact – and as Mavis, 80, reached the part about their first kiss, her husband Dennis, 81, passed away.

“My dad just slipped away listening to my mom talking about their first kiss. It was the end of a 60-year love romance,” the pair’s daughter Joy Munns, 54, recalls.

“It was so touching the way he went.”

Mavis and Dennis, who was in the agonising final stages of terminal cancer, had overdosed on sleeping pills and painkillers at their Staffordshire bungalow after vowing “to go” together.

They left behind a scrawled suicide note, which trailed off as Mavis fell unconscious.

But tragically for the great-gran, who survived the joint suicide bid in February 2018, her husband’s death in hospital the next day wasn’t the end of their story.

As their three children – including Joy – watched in horror, Mavis was arrested in her dressing gown and slippers while still in hospital and later charged with Dennis’s murder.

After spending 30 hours in a cell, where she couldn’t bring herself to use the toilet, she was forced to endure a two-week trial – which ultimately ended in her acquittal.

Now, daughter Joy is calling for an inquiry into Britain’s “outdated” assisted dying laws, saying: “A law is clearly not working if it makes criminals of innocent great-grandmothers.”

Assisting a suicide is currently illegal in the UK, punishable by up to 14 years in prison.

And Joy believes, if the law didn’t criminalise Brits like Mavis who help their dying loved ones to end their agony, her father’s death would have been very different.

“We could have all gone round to Dad’s,” she tells Sun Online.

“He could have had a Wolves match playing and passed away peacefully, with no pain. Instead, it was a cold, lonely night. They must have been so afraid, so alone.”

Mavis, a stay-at-home mum, and pit overman Dennis, who first met in 1958, had enjoyed a long and happy marriage, raising Joy and her older siblings Kevin and Lynne.

“We were a good, honest, working class family,” recalls Joy, now a married mum of two.

“We used to have our meals together every night.

When they reached retirement age, the couple often popped by Joy’s house to take out her kids Ruth, now 23, and Shaun, 25. “They loved being gran and grandad,” she says.

MAVIS, Joy and their family are backing a new campaign by Dignity in Dying after the great-gran was criminalised by the UK’s current assisted dying laws.

The Compassion is Not a Crimecampaign, launched this week, calls on the Justice Secretary to launch an inquiry into the impact of the “cruel, outdated” blanket ban on assisting someone to die.

At present, people convicted of assisting a suicide face up to 14 years behind bars. Because of this, some terminally ill people decide to travel abroad to die.

Joy – who wants assisted dying to be allowed in certain situations – says: “My mum would have done anything for her husband, but she had no idea that her actions, motivated purely by love, would land her in the dock.

“On top of losing Dad, we were terrified we would lose Mum to life in prison. Under an assisted dying law, this would never have happened.”

She adds that she accepts some people believe only God has the right to take a life, yet tells Sun Online: “That’s fine… but don’t make another person suffer for longer just for your beliefs.”

Sarah Wootton, chief executive of Dignity in Dying, says: “Compassion should not be a crime, but under the UK’s blanket ban on assisted dying, it is.

“Our outdated assisted dying laws deserve to be scrutinised, not dying people or their loving families.”

Critics have said that relaxing assisted dying laws would pressure vulnerable and disabled Brits into ending their lives because they fear being a burden to their loved ones.

Dr Gordon Macdonald, chief executive of Care Not Killing, said of Mavis’s case: “This is a deeply sad and troubling case, but it does not justify a change in the law to allow assisted suicide.

“It raises the question of the support the Ecclestons received as they struggled to cope with the challenges of dealing with a terminal disease.”

But midway through 2015, devastation hit the family when Dennis was diagnosed with bowel cancer and given between six weeks and six months to live.

A dignified man in his late 70s, he refused treatment.

“As far as he was concerned, he’d walked us down the aisle, watched us grow up, had grandkids,” explains Joy. “He didn’t want to be in and out of hospital.”

For two years, Dennis defied doctors’ expectations – but in 2017, his health deteriorated.

“I said, ‘I think it’s about time we think about putting Dad in a hospice’ – and he and Mum didn’t talk to me for a week,” recalls Joy. “They knew what they wanted.”

The couple’s wish, it turned out, was to die together.

Understandably, Joy struggled to accept her mum’s desire to end her life too.

“We said to them, ‘this is illegal you’re not allowed to do this’,” says Joy. “That’s why Mum wanted to go with Dad. She promised she’d go with him and they never broke promises to each other.”

‘Mom promised she’d go with him’

But one conversation, around Christmas 2017, prompted Joy to give her mum her “blessing”.

“Mum looked me square in the eye and said, ‘I love you with all my heart but I love your dad and I want to be with him’,” recalls the Anne Summers regional leader.

“I thought, ‘who am I not to give them my blessing?’ They’d been fabulous parents.”

Still, as the New Year arrived, Joy thought – and hoped – her dad would die in his sleep.

Yet unbeknown to her and her siblings, at around 3am on February 19, 2018, her parents reached breaking point, after Mavis woke up to cries like  a “wounded animal”.

“Mum found this great big massive growth and she realised how much pain Dad was in. She just turned around to him and said, ‘Ok Dennis, I’ll do it’,” Joy recalls.

Dennis then told Mavis a secret location where he’d been stockpiling sleeping tablets.

“They did a note for us, but in the end my dad was getting so tired,” Joy says.

“He said, ‘we’ve just got to do it… Mavis, just hold your nose and swallow it down’.”

Mavis then tucked her husband up with a blanket, before they wished each other “goodnight” and fell unconscious.

But while Mavis hoped the cocktail of drugs would end her life, she woke up in hospital hours later, after Lynne discovered her and Dennis at their bungalow in Huntington.

When Joy got the phone call, her world “shattered into a million pieces”. “I knew what their plans were but in my head was hoping it would never come to that,” she says.

Dennis, who had a Do No Resuscitate order, died the next day. Before he passed away, he “squeezed” Mavis’s hand while listening to the story of their first date.

But a day later, as Joy returned to the hospital with fresh clothes for her mum, she was pulled into a side room by police and told Mavis was being charged.

Taken into custody in her nightie

“They took her in her nightie dressing gown and slippers… it was just horrendous.”

Mavis, herself battling immense grief, spent a day and a half locked up in a police station cell, where she refused to use the toilet because she knew she was being watched.

Fortunately, kind-hearted officers allowed the OAP to use the ordinary loo.

Mavis was later formally charged and put on trial at Stafford Crown Court.  For Joy, it was heartbreaking hearing her mum going “over it all and reliving that night”.

She lived in fear that Mavis would be convicted and locked up – but in September last year, the OAP was cleared of murder and an alternative charge of manslaughter by jurors.

“The jury believed us as a family,” Joy says.

“The foreman puffed his chest out and he bellowed out ‘not guilty’ because my mom is hard of hearing. It was so emotional. You can’t explain the sheer relief.”

The court had heard there was doubt over whether the overdose had actually killed Dennis, instead of the palliative use of drugs to ease his agony or a combination of the two.

‘We talk about Dad all the time’

Finally, Mavis was free to return home without criminal action hanging over her.

Today, the great-gran – who has said she doesn’t regret the suicide pact – lives with Joy, her husband Kenton, 56, son Shaun and daughter Ruth in south Derbyshire.

“I’ve got this extra time with her. It’s so precious,” says Joy, who is backing Dignity in Dying’s campaign Compassion is Not a Crime, launched this week.

On Sunday, the family will be celebrating Mavis’s 81st birthday with a nice meal out, during which they’ll undoubtedly share fond memories of Dennis.

“We talk about dad all the time. It’s like he’s here with us,” Joy adds.