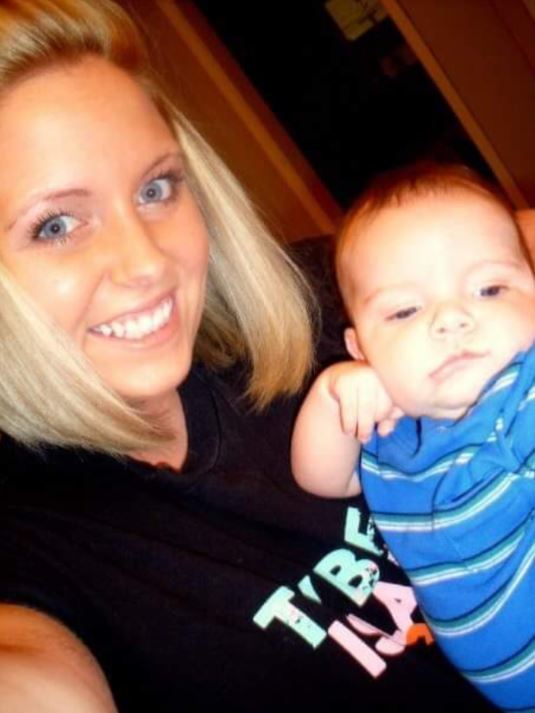 WHEN Vicky Atkinson’s teen daughter Audrey didn’t come home from her work as a waitress one day, she was immediately concerned. But the mum, from Covington, Georgia, USA, never...
by Zach Freeman November 18, 2019 273 Views

WHEN Vicky Atkinson’s teen daughter Audrey didn’t come home from her work as a waitress one day, she was immediately concerned.

But the mum, from Covington, Georgia, USA, never imagined the horrific truth – that her daughter had been murdered by her ex-boyfriend.

Vile Anthony Barrow, who was the father of Audrey’s eight-month-old son, hid in the back seat of her car before chasing her into a petrol station – shooting her 13 times as she tried to run away.

He then killed himself, leaving a devastated Vicky to raise their son.

Audrey was my miracle child. Me and her dad Thomas had all but given up trying when I fell pregnant at 35.

We’d been trying for 15 years when Audrey was born in October 1990, so she and I were always close.

She shared all her secrets with me, especially when it came to boys.

When she started dating Anthony Barrow in summer 2017, aged 17, she looked to me for approval.

I happily gave it. Audrey had met Anthony through mutual friends in our neighbourhood and, although he was two years old, he had a good job as an electrician and seemed nice.

He was always respectful to me. Audrey’s dad had died two years earlier, from complications of hepatitis C, so it was even more important to Audrey that I supported her.

Holding their son, Anthony threw Audrey to the ground. ‘If you ever leave me, you’re dead,’ he threatenedVicky Atkinson64

After just two months, Anthony became withdrawn and irritable. I didn’t like it, but Audrey thought she loved him.

She fell pregnant at 18, after a year of dating, and was unusually nervous to tell me. Audrey cried when she broke the news, sobbing: “I’m so sorry mum.”

We discussed options, but Audrey was adamant she wanted the baby. “And Anthony is so happy,” she added.

I went to every doctor’s appointment with Audrey, we were all so excited. Then she and Anthony moved in together, but it didn’t go well.

Audrey would regularly call me in tears, telling me stuff like “he’s making me sleep on the floor”.

Another time, their toilet got blocked and overflowed. Anthony refused to clear it up, making Audrey do it with her heavily pregnant belly.

Audrey was scared. She called and told me she was terrified they might kidnap Aiden, who was with me at my mum’s houseVicky Atkinson64

Then a worried friend of her’s rang me, saying Anthony had hit Audrey’s head against a car door.

Enraged, I called her. “I heard Anthony is mistreating you,” I said.

Unbeknown to me, I was on speaker phone, with Anthony sat beside her. “I would never touch her,” he suddenly piped up, while Audrey lied to protect him.

“If this is true then I know people and you will be dead!” I said, hoping to send a clear warning I was watching him.

But all it did was push Audrey away. After that, she stopped telling me anything about their relationship.

In summer 2009, I was in the delivery suite with Audrey and Anthony when my grandson Aiden was born.

It was one of the best days of my life.

After his birth, they moved back in with me, as they couldn’t afford to rent their flat with a young kid.

In front of a store full of people, Anthony shot Audrey 13 times. She didn’t stand a chanceVicky Atkinson64

But things became tense, it was clear Anthony hated everything about me.

He was surly and rarely spoke to me. When he did, he would tell me my daughter was a flirt, and other disrespectful, unfounded claims.

We often rowed, because I’d always defend my daughter. Against my wishes, they moved out to live with Anthony’s grandparents.

I worried about Audrey but she’d never admit he hit her, even though I saw the bruises on her body.

It was my birthday and I’d planned to go for dinner with Audrey and some family in Atlanta to celebrate.

Wrecked with jealousy, Anthony was convinced Audrey was lying about where she was going.

Afterwards, I was in a fog, but my grandson got me through my darkest daysVicky Atkinson64

It was the final straw for my daughter. “I’m done,” she told him. “I’m leaving you.”

Holding Aiden, Anthony threw Audrey to the ground. “If you ever leave me, you’re dead,” he threatened.

He then got a bullet, which he gave to Aiden to kiss. “Look at this bullet,” he told him. “This is the one which is going to kill your mother.”