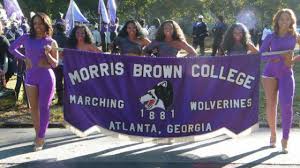 Morris Brown College Receives $500K Grant To Preserve Its History Good news #Roommates! After struggling financially for years and on the brink of permanent closure more than once, historic...
by Jasmin Williams September 17, 2019 244 Views

Good news #Roommates! After struggling financially for years and on the brink of permanent closure more than once, historic HBCU Morris Brown College recently received a generous grant to hopefully keep it open for years to come.

According to @cbs46, Morris Brown College was a recent beneficiary of a $500,000 grant from the National Park Service on September 13. The National Park Service previously announced that more than $12 million in African American Civil Rights grants will be used to fund projects across 17 states. Morris Brown, located in Atlanta, is one of only two grant recipients in Georgia.

The grant is more than just a mere financial donation though, as its purpose is to preserve and highlight stories relating to the black struggle for equality throughout the 20th century. Morris Brown intends to use the grant for its Fountain (Stone) Hall Restoration Project.

Fountain Hall is a historic building on Morris Brown’s campus and its oldest surviving building, having been built in 1812. Back in 1974, Fountain Hall was declared a national landmark. It is named after Bishop William A. Fountain, a former Georgia bishop in the African Methodist Episcopal Church (AME.)

“We are thrilled and tremendously grateful to be awarded this prestigious grant. Restoring Fountain Hall heralds a significant development in our progress to bring this esteemed institution back to its place of prominence.”

You may remember that in 2002 Morris Brown lost its accreditation, followed by impending foreclosure in 2012. While the college is currently not accredited, administrators hope to become eligible again by October 2020—and the grant definitely brings them one step closer.

To date, Morris Brown has raised almost half a million dollars of the $15 million goal it set since March.

Is Motherhood In The Future For Megan Good?