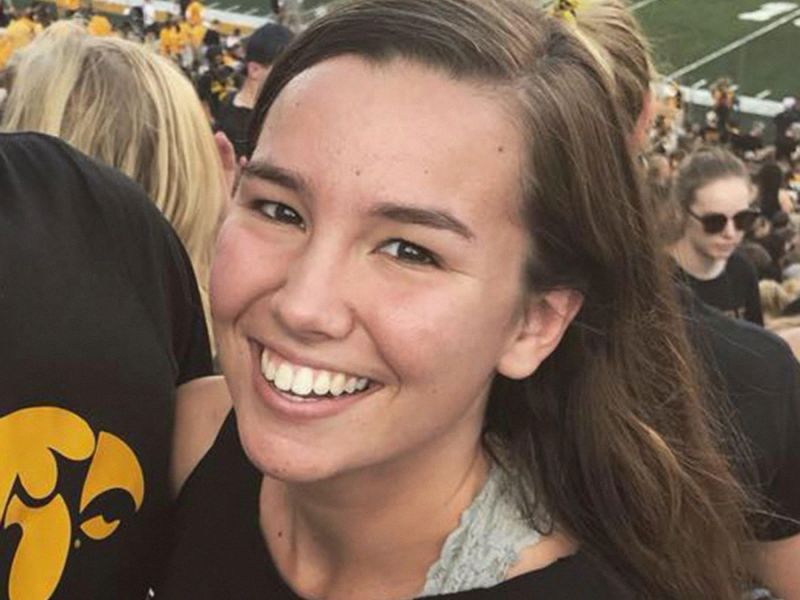 Mollie Tibbetts, the missing 20-year-old college student whose case has gripped the nation, was found dead, according to a report on Aug. 21. Two sources told Fox News about the latest...
by Joy Smith August 21, 2018 363 Views

Mollie Tibbetts, the missing 20-year-old college student whose case has gripped the nation, was found dead, according to a report on Aug. 21.

Two sources told Fox News about the latest development, saying that her body is believed to have been found in Iowa.

Other details about the finding are not clear.

According to KCRG on Aug. 21, the Iowa Division of Criminal Investigation said that a press conference will be held at 5 p.m. in Montezuma regarding the search for the young woman. The conference will be held at the local sheriff’s office. “Officials won’t confirm anything right now, but say a significant amount of information will be shared,” the KCRG report stated.

Tibbetts vanished more than one month ago, and a $366,000 reward is being offered for her return.

Earlier this week, her father, Rob Tibbetts, said that he is returning home to California. “Very reluctantly, I’m being told I sort of need to do this,” he told KCRG. “We’ve called this sort of a halftime, a break.”

Mollie was last seen in Brooklyn, Iowa, after going for a jog. She had been dogsitting for her boyfriend, Dalton Jack, who has been ruled out as a suspect in her disappearance.

“I still feel that way, we all feel that way, that’s why it’s difficult for me knowing there’s a good chance that we’re going to bring her home,” said Rob Tibbetts about returning home. “I want to be there when she arrives.”

Her father said that the meeting with Pence was “touching” and “genuine,” and Pence was “just another father that was just hurt and bewildered by Mollie’s story,” Foxreported. “He just expressed in a very private way his compassion. It was very genuine and it was real. It was very touching,” Tibbetts said.

“I got the sense that it was not a politician at all, it was just another father that was just hurt and bewildered by Mollie’s story just like everybody else in America,” Tibbetts added.

The father added that he thinks “that ordinary quality of Mollie that people can identify with and that makes this story, this whole episode all the more frightening” is why people, including the vice president, can relate to the case.

In an Aug. 13 report, the Register said that investigators have carried out more than 500 interviews.

Mitch Mortvedt, assistant director of the Iowa Division of Criminal Investigation, said that her disappearance is “completely out of character” for Tibbetts.

“It is possible that Mollie came into contact with someone who has caused her harm,” Mortvedt said at the time. “Individuals who commit violent crimes often display behavior that is recognized by those with whom they live, work, attend school or are in otherwise close relationships with,” he said

Bishop Roy Brown’s Church Is Evicting His Widow From The Home They Shared Together!

Lebron James And Lance Stephenson Are Both Lakers Now Let’s Talk About The Blow In The Ear Move.