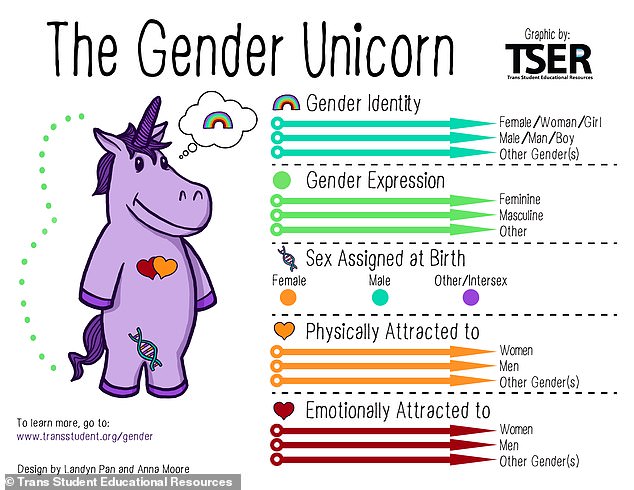 A middle school science teacher in California caused an uproar this week for giving his students a “Gender Unicorn” sheet that explained gender identity and sexual attraction. Luis Davila Alvarado, who teaches at...
by Raquel Jayson August 11, 2019 378 Views

A middle school science teacher in California caused an uproar this week for giving his students a “Gender Unicorn” sheet that explained gender identity and sexual attraction.

Luis Davila Alvarado, who teaches at Denair Middle School in California’s San Joaquin Valley, passed out the paper on Wednesday so his students could understand why he uses “Mx.” rather than “Mr.,” the Modesto Bee reported.

The activity was part of a “getting to know each other” exercise on the first day of school, Denair Unified School District Superintendent Terry Metzger told the paper.

“He gave a handout discussing gender in [his] first and second periods. It was not an assignment and students were not required or asked to fill it out,” Metzger said.

The handout, provided by Trans Student Education Resources, shows a simple drawing of a unicorn, with a chart explaining gender and sex, as well as sexual and emotional attraction.

Metzger said the school’s principal happened to be in Alvarado’s classroom during his second period and “directed him to stop distributing it.”

A handful of parents called the school with complaints.

“I’ve talked to a lot of parents and a lot of grandparents and I know a lot of them have called the school and complained about it,” grandmother Tammy Stout told Sacramento’s Fox 40.

“I don’t care what your identity as, that’s your decision. But NO ONE has the right to ask my child these questions that have absolutely nothing to do with what you are teaching in a classroom,” wrote one of the student’s parents on Facebook.

Another person commented: “Let’s say the kids are confused about what to call him/her. How in the hell does this … clear up any confusion about him/her?!?! What a crock of s—!”

School officials would not comment on any disciplinary actions taken against Alvarado.

Man raped 8-year-old girl after hitting her in head with shovel, fracturing her skull: police