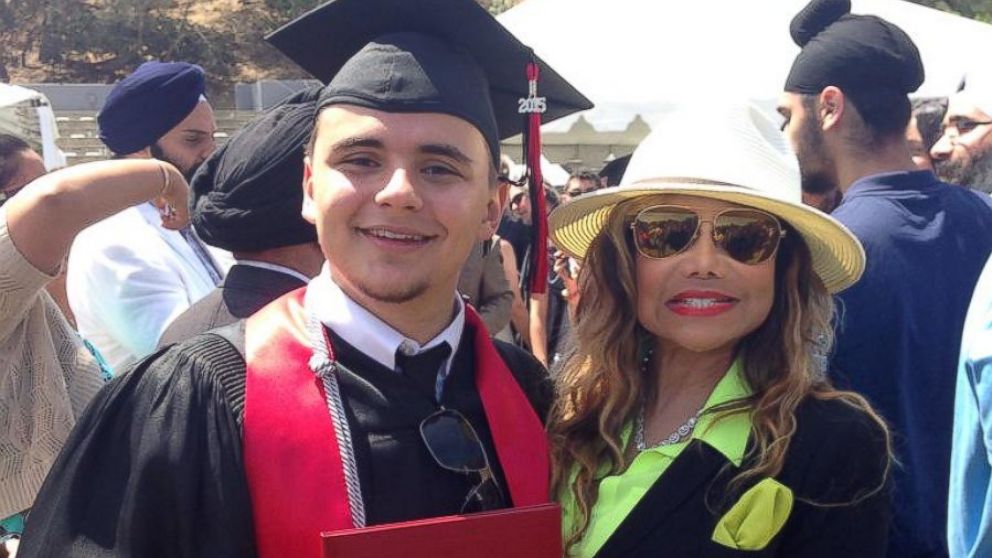 Prince’s cousin, TJ Jackson, tweeted a photo of himself and the graduate on Saturday, writing, “Prince, it’s been a long road but you did it. Keep learning, keep growing and keep giving back! So so proud of you. I love you. #graduation #congrats #proudcousin.”

Prince proudly wore his graduate clothes for photos, including for two on his own Instagram account with grandma Katherine JacksonOpens a New Window..

His graduation was a happy moment for the family after controversial claims about Michael’s alleged child molestation were made in Leaving NeverlandOpens a New Window..

The “Bad” singer’s relatives have vehemently denied the allegations by Wade Robson and James Safechuck, who contend that Michael had molested them when they were little boys.

Prince and brother Blanket, 17, now known as Bigi, have largely stayed out of the spotlight, unlike their singer/actress sisterOpens a New Window. Paris, 21.

Prince hasn’t made a public comment about Leaving Neverland, instead focusing on finishing college.

Michael, who died tragically at age 50 in 2009 from an overdose of propofol and benzodiazepine given to him by his doctor Conrad Murray, “would be so happy just knowing that Prince is happy!” a source previously told RadarOpens a New Window..

Prince told his Instagram followers that he rode his motorcycle to his graduation ceremony.

Scroll through Radar’s gallery for more on Prince’s academic reign!

Prince posted an InstagramOpens a New Window. photo of himself wearing a cap and gown with his wheelchair-bound grandma Katherine. He wrote on Mother’s Day, May 12, 2019, that he wanted to “celebrate some of the strongest women I have been fortunate to know and love so closely in my life and who deserve recognition on Mother’s Day.”

Michael’s kids have gone through a lot and this weekend it was time to recognize Prince’s achievement. While graduating, he stuck close to family matriarch Katherine, 88, who suffered a debilitating stroke, followed by a near heart attack in January 2019.

Before going to Loyola Marymount University, Prince attended the Buckley School, known for its celebrity students. Upon becoming a college graduate, Prince wrote online, “I am proud of my degree as I believe it’s a testament to my dedication and discipline.”

As Radar has reported, Prince has helped with sister Paris’ recovery after she allegedly attempted suicide.

While Prince has lived quietly, he did join Paris for a Las Vegas 60th birthday bash for their late father in 2018. That was before the Leaving Neverland scandal hit.

Prince and his siblings have ditched Michael’s old home Neverland in Santa Barbara, California. The estate was abandoned by most of the family after the pop star’s death and now it’s been made notorious in the title for the HBO documentary. Prince is trying to move on with his life amid the controversy.
Source: radaronline.com
photo Credit:
Tags
CollegeGradMichealJackson
Categories
News
SHARE THIS ARTICLE
OLDER ARTICLE

Oprah walked former student down the aisle at her wedding!