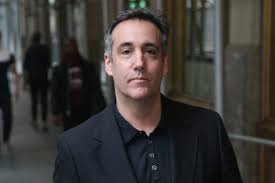 Michael Cohen has reported to prison to begin his sentence!

Michael Cohen, the president’s former lawyer who publicly turned on his ex-boss while under investigation, reported to federal prison Monday for a three-year sentence — while taking a few more swipes at...
by Joy Smith May 6, 2019 195 Views

Michael Cohen, the president’s former lawyer who publicly turned on his ex-boss while under investigation, reported to federal prison Monday for a three-year sentence — while taking a few more swipes at President Trump and teasing future revelations about his conduct en route to the slammer.

Cohen faced a 2 p.m. deadline to report to the Federal Correctional Institution, Otisville, a federal prison in the countryside 70 miles northwest of New York City. His car was seen driving into the facility shortly after 11 a.m. ET.

Briefly addressing reporters outside his New York City apartment earlier in the morning, Cohen said: “There still remains much to be told and I look forward to the day that I can share the truth.”

He also took a final swing at Trump, suggesting he hopes the 2020 election ousts him. “I hope that when I rejoin my family and friends that the country will be in place without xenophobia, injustice and lies at helm of our country,” he said.

Cohen — who once famously claimed he was willing to “take a bullet” for Trump before later turning against his boss, including during nationally televised congressional testimony in February — pleaded guilty last year to campaign finance violations, tax evasion and lying to Congress about Trump’s past business dealings in Russia.

Cohen’s attorney, Lanny Davis, said Monday, “I am confident that when he returns, Michael will continue to be appreciated by the many millions of Americans who admire the courage he showed in standing up to Donald Trump’s hate machine and putting his family and country first.”

In February’s House committee hearing, Cohen said of Trump: “He is a racist. He is a conman. And he is a cheat.” Cohen repeatedly expressed regret and said, “yet I continued to work for him.”

The sentence, while not the maximum, signifies a remarkable fall for the hard-charging lawyer who for years was part of Trump’s inner circle.

Among other charges, Cohen pleaded guilty to breaking campaign finance laws during the 2016 campaign by helping orchestrate payments to silence former Playboy model Karen McDougal and adult film actress Stormy Daniels, who said they had sexual encounters with Trump while he was married. Trump has denied the affairs and has not been charged with any crimes related to the payments.

Cohen also pleaded guilty to misleading Congress about his work on a proposal to build a Trump skyscraper in Moscow, hiding the fact that he continued to speak with Russians about the proposal well into the presidential campaign. Prosecutors also accused Cohen of a years-long “tax evasion scheme” to avoid paying federal income taxes on more than $4 million made through a number of ventures, including through his ownership of taxi medallions, his selling of real estate in Florida and his consulting work for other clients.

After reporting to prison, Cohen will undergo medical and mental health screenings and be assigned a job, such as mowing the grounds or cleaning up the visiting room. He’ll also get sets of clothing, bedding and towels.

At the prison camp, about 115 inmates sleep in bunks lined up in barrack-style halls, instead of individual or two-man cells like in higher-security facilities. Recreational amenities include tennis courts, horseshoes and bocce ball.

Forbes once ranked Otisville as one of “America’s 10 Cushiest Prisons,” but former employees and inmates say it’s hardly “Club Fed.” Inmates are still doing time and they’re still separated from their families and friends.