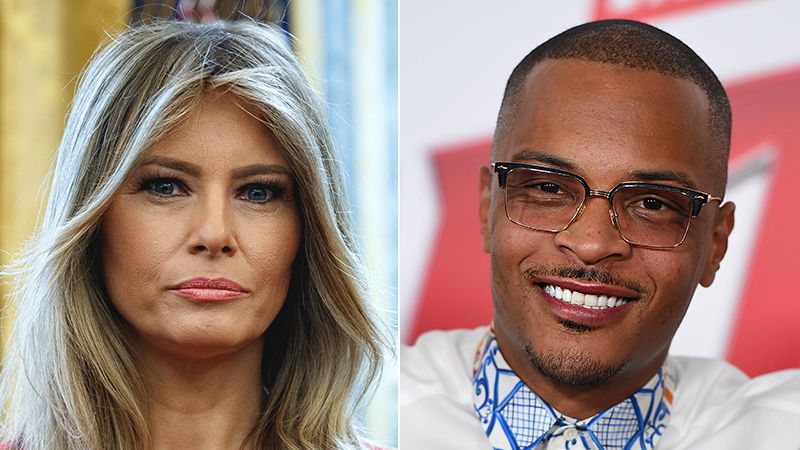 Melania spokeswoman calls for boycott of T.I. over video

A Melania Trump spokeswoman is asking people to boycott Atlanta rapper T.I. because of his promotional album video that shows a woman resembling the first lady stripping in the...
by Joy Smith October 16, 2018 1333 Views

A Melania Trump spokeswoman is asking people to boycott Atlanta rapper T.I. because of his promotional album video that shows a woman resembling the first lady stripping in the oval office.

T.I., whose real name is Clifford Harris, tweeted Friday “Dear 45, I ain’t Kanye” before sharing the video. The woman is wearing a jacket that reads “I REALLY DON’T CARE, DO U?” Trump wore a jacket with that wording on her way to visit migrant children in Texas. She said recently in an interview with ABC News that she wore the jacket to troll reporters.

Those tweets follow T.I. posting on Instagram that he was done working with rapper Kanye West, who is a President Donald Trump supporter.

If T.I. hadn’t already made that distinction clear in a Thursday Instagram post publicly disavowing his former friend and collaborator over his Oval Office display, the Atlanta rapper drove the point home over the weekend with the NSFW presidential-themed video teaser for his new album “Dime Trap,” which features him cavorting with a Melania Trump look-alike wearing nothing but the first lady’s infamous “I Really Don’t Care, Do U?” jacket.

The clip, which the rapper quietly posted Friday, begins with real footage of President Donald Trump boarding Marine One solo as T.I. watches from the Oval Office and a voice-over notes that the first lady did not accompany him on the trip, which “has a lot of people wondering.”

After the coast is clear, T.I. takes a seat behind the Resolute Desk and lights a cigar as a woman wearing nothing but the first lady’s notorious green Zara jacket (which she told ABC News was directed at the left-wing media) and a pair of heels steps in front of him, disrobes and begins dancing suggestively on the desk. Later, he watches as she sprays paint over the eyes of her husband’s portrait.

The president, who spent the weekend campaigning and welcoming Pastor Andrew Brunson home from captivity in Turkey,  has yet to acknowledge the T.I. video on his social media channels. Nor has the first lady, whose first solo televised interview aired on ABC’s “20/20” the night the video went up.

But Melania’s spokeswoman, Stephanie Grisham, expressed outrage, asking, “How is this acceptable?”

How is this acceptable? #disgusting #boycottT.I. @Tip

WATCH: #TI sits at the oval office while a #MelaniaTrump lookalike strips and dances on the desk https://etcanada.com/news/375879/t-i-enlists-melania-trump-lookalike-stripper-in-album-promo-music-video/ …

T.I. has been busy on social media lately. He made waves last week when he went after West following the rapper’s appearance at the White House.

“At one time it was a pleasure to work alongside you… now, I’m ashamed to have ever been associated with you,” he wrote. “I’ve reached my limits. This is my stop, I’m officially DONE!!!!”

The rapper, whose real name is Clifford Harris Jr., revealed he’d turned down West’s invitation to join him at the White House and called the meeting the “most repulsive, disgraceful, embarrassing act of desperation & auctioning off of one’s soul to gain power I’ve ever seen.

The writing on the jacket was first noticed as Melania Trump boarded the plane to a plane at Andrews Air Force Base, Md., to travel to Texas. Andrew Harnik,

Kylie Jenner and Travis Scott both using ‘hubby and wifey’ language! Did we miss a marriage?