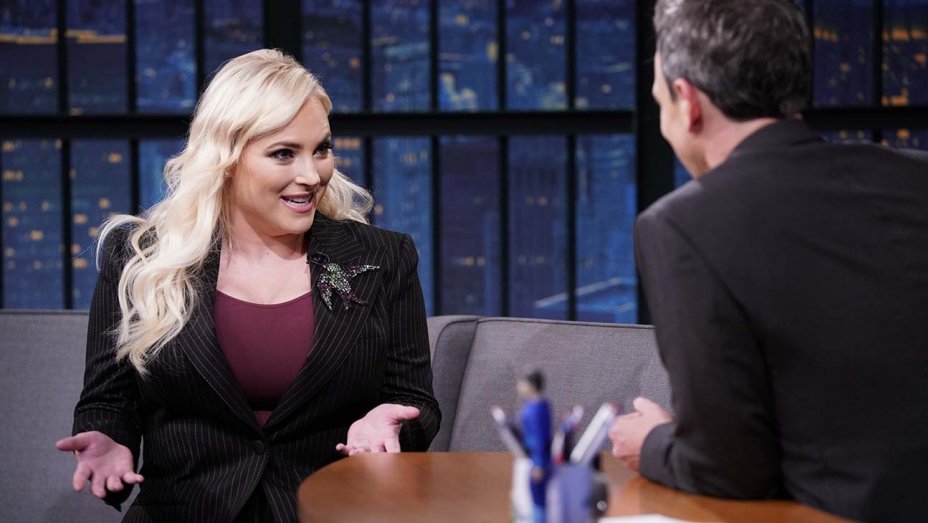 VIEW PHOTOS NBC Women of ‘The View’ — Then & Now In a series of since-deleted tweets, Ben Domenech called the late-night host an “untalented piece of s–t.”...
by Raquel Jayson May 9, 2019 262 Views

VIEW PHOTOS
NBC
Women of ‘The View’ — Then & Now

In a series of since-deleted tweets, Ben Domenech called the late-night host an “untalented piece of s–t.”

While she regularly goes head-to-head against Joy Behar on “The View,” Meghan McCain got into a tense debate with Seth Meyers on Tuesday — an argument which set off her husband.

McCain was a guest on “Late Night with Seth Meyers” last night, where the conversation got heated when he suggested it was “dangerous” for McCain to repeatedly bring up and condemn comments Rep. Ilhan Omar made that were considered anti-Semitic, after Omar had already apologized for them.

On Meyers, McCain said she stood by “every single thing” she’s said about Omar, adding, “If that makes me unpopular in this room or in front of you, so be it.”

“Is there a way for people to talk about differences in Israeli policy without getting framed as anti-Semitic language?” Meyers asked, pushing back. He then also said he believes it’s “unfair” of McCain to keep bringing up tweets for which Omar has already expressed regret.

“Are you her publicist? Are you her press person?” McCain asked in response. “What would make you happy coming out of my mouth right now, I’m genuinely curious?”

“I’m perfectly happy of everything that’s come out of your mouth,” he told her, “and I like that we spent this time together.” When she then noted that her “opinions are very strong,” Meyers quipped, “That is coming across, I do want you to know that!”

Meghan McCain SCREAMS at Joy Behar, Forces Whoopi to Cut to Commercial on ‘The View’

Following her appearance, McCain’s husband and conservative commentaror Ben Domenech unloaded on social media in a series of since-deleted tweets.

“I see that @sethmeyers, the untalented piece of shit who only has his job because he regularly gargled Lorne Michaels’ balls, went after my wife tonight with his idiotic anti-Semitic bullshit,” he wrote.

“Seth is an awful person who is known within the industry for how terrible he is,” he continued. “He is a monumental asshole who is utterly unfunny. He deserves the mockery he receives from all the people who laugh at him.”

He added, “Here is proof that white men get ahead despite their obvious lack of talent: it’s @sethmeyers, who would beg for a third of the viewers at @TheView. He’s awful, untalented, and a perfect definition of a cuck.”

While those tweets have since been removed, he followed them up with one apologizing for “rage tweeting” in the first place.

I love my wife. I apologize for rage tweeting about how Seth Meyers treated her. I don’t like him, I think he’s a hack, but I shouldn’t have done that. I’m sorry to anyone I offended.

7,224 people are talking about this

McCain hasn’t addressed the appearance, except to thank conservative writer Seth Mandel for a pair of tweets calling her an ally and accusing Meyers of “protecting Congress’s most prominent antisemite.”

Late night hosts are deeply invested in protecting Congress’s most prominent antisemite, and their normalization of Jew-hatred in this climate should be noted and not forgotten https://www.mediaite.com/tv/meghan-mccain-gets-super-testy-with-seth-meyers-over-ilhan-omar-are-you-her-publicist/amp/?__twitter_impression=true …

Meghan McCain Gets Super-Testy with Seth Meyers Over Ilhan Omar

Late Night host Seth Meyers and The View host Meghan McCain got into a very tense conversation about Rep. Ilhan Omar (D-MI), with McCain at one point snapping at Meyers “Are you her publicist?”

928 people are talking about this

Also anyone not of a deeply diseased mind should be grateful that ppl like @MeghanMcCain continue to defend our community despite constantly being attacked for it. We’re lucky to have allies. I’m sorry we don’t always do an appropriate job of showing it.

71 people are talking about this

This Pastor Went To Drastic Extremes When His Wife Found Out About His Mistress! He Shot Himself Dead And Set The House On Fire To Kill The WIfe And Daughters