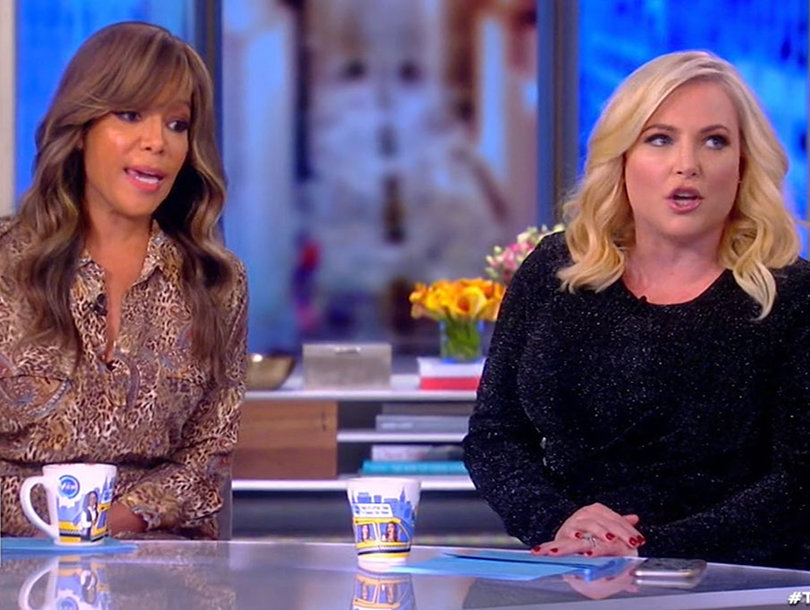 Things are just going swimmingly on The View. Following a week’s worth of dramatic impeachment hearings, conservative co-host Meghan McCain lashed out at her View colleagues on Friday over Republican belief that President Trump did...
by Raquel Jayson November 22, 2019 213 Views

Things are just going swimmingly on The View.

Following a week’s worth of dramatic impeachment hearings, conservative co-host Meghan McCain lashed out at her View colleagues on Friday over Republican belief that President Trump did not commit an impeachable offense—specifically getting into a heated, personal clash with co-host Sunny Hostin.ADVERTISING

After McCain pointed out that retiring Rep. Will Hurd (R-TX) said that he has not heard evidence proving Trump committed bribery or extortion, liberal co-host and frequent sparring partner Joy Behar wondered aloud whether Hurd was “deaf” since “we all heard it.”

This prompted McCain to grumble that Democrats had “gotten out over their skis” so many times with Trump that there’s now a problem of distrust for conservatives like here when it comes to impeachment.

DOES AMERICA CARE ABOUT IMPEACHMENT? As the public impeachment hearings come to an end, the co-hosts weigh in on the impact they have on public opinion. https://t.co/vLeSDoqB0B pic.twitter.com/gTCyCBp9Tm

“Can I say one thing—what about the Constitution? Isn’t that the bottom line?” Behar asked.

“The Constitution belongs to all of us whether we have it on our nightstand or not,” Behar retorted.

Moments later, McCain moved on to her next target after Hostin said she was “shocked” to hear Hurd dismiss the evidence against the president.ADVERTISING

“I will also say that it tells me that he is complicit, the Republican Party has enabled this president, continues to enable this president,” Hostin continued, causing McCain to accuse her of “slandering” a former CIA officer.

“It’s about the fact that he heard evidence clear and simple and for him to sit there and say that he—the evidence has to be overwhelming and that he heard no overwhelming evidence, I want to know which hearings he was sitting at,” Hostin added to loud cheers from the audience.

“You have been speaking a lot,” Hostin quickly fired back.

Cain And Abel: Woman gets 6 years for fatally stabbing her identical twin