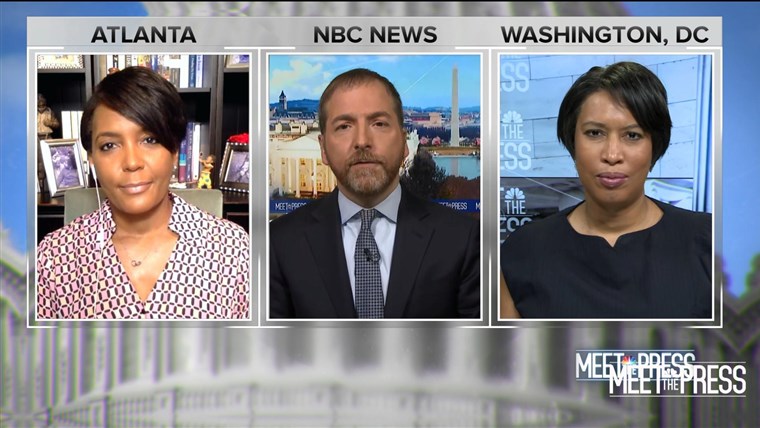 The Mayor of D.C. and the Mayor of Atlanta continue to make headlines. These two women are strong and unapologetically black. They have been attacked by as high as...
by Zach Freeman June 5, 2020 111 Views

The Mayor of D.C. and the Mayor of Atlanta continue to make headlines. These two women are strong and unapologetically black. They have been attacked by as high as the Office Of The United States President and more. They seem to be quite unbothered and focused on their task at hand.

It’s hard to be black in America, yet it’s harder to be a black woman in America in a leadership position of any kind. So we celebrate these two women as they work hard daily to bring change that will “impact positively” black people in their regions and maybe the world.

Is unapologetic about her sentiments towards Trump’s actions and comments concerning her city and the injustices we continue to see in America.

Thousands of National Guard troops and federal officers in riot gear and masks ringed the White House and monuments in the U.S. capital this week, evoking comparisons to an occupying force.FILE PHOTO: Washington, DC Mayor Muriel Bowser bows her head in prayer during a vigil as protests continue on the streets near the White House over the death in police custody of George Floyd, in Washington, U.S.,

Hit the streets with the protesters! The level of disrespect resembles what was often seen when @barackobama spoke.

Washington Mayor Muriel Bowser on Thursday said she wants most of them out of her district of 700,000 residents. But her powers are limited.

Like cities countrywide, the U.S. capital has been rocked by a week of protests against police brutality and racism following the death of George Floyd, a black Minneapolis man who died after a white police officer knelt on his neck.

Shops and offices in D.C. and nearby areas were hit by nighttime vandalism and looting after peaceful demonstrations last weekend, prompting Bowser to impose a 7 p.m. curfew on Monday and Tuesday.

The Democratic mayor told reporters she is fine with D.C. National Guard helping to keep order. But she is examining all legal options to reverse the Trump administration’s deployment of forces from elsewhere.

“We want troops from out-of-state, out of Washington, D.C.,” Bowser said during a press conference on Thursday.

Several hundred active-duty troops from the 82nd Airborne Division who were sent to the D.C. area are expected to start returning to their home base in North Carolina, a U.S. official said on Thursday.

Some 3,300 national guardsmen are in D.C. or en route from Florida, Indiana, Maryland, Missouri, Mississippi, New Jersey, Ohio, South Carolina, Tennessee and Utah, according to the National Guard.

The prospect of active-duty soldiers on the streets of the capital has alarmed former military officers.

“Every active-duty troop that participates in this thing should resign, should leave the military,” said Harry Wiggins, a retired Army major, who on Thursday was carrying a staff with an American flag flying upside down, an international sign of distress, several blocks from the White House.

Bowser also questioned the command of hundreds of armed officers from nearly a dozen federal agencies, including Customs and Border Protection, the Bureau of Prisons and the Transportation Security Administration, who have been posted outside government buildings and on D.C. streets this week.

Some of the officers wore uniforms with no discernable insignias, raising questions about their identity and mission.

On the seventh day of protests in Atlanta, two of the city’s top officials made an appearance among the demonstrators.

Mayor Keisha Lance Bottoms and police Chief Erika Shields took an “impromptu walk with protesters to show solidarity against racism and injustice,” the city of Atlanta said in a tweet Thursday evening.

JCPenney to close 154 stores this summer: See Which Stores