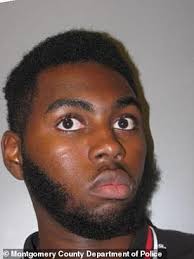 A Maryland high school student was arrested Monday after police say he assaulted a fellow classmate with a frying pan.

Prince Cutchember, 19, was charged with assault in the first degree after he allegedly hit a student at Walt Whitman High School Monday morning during a fourth-period health class, FOX5 reported.

Montgomery County Police were called to the school at around 10:41 a.m. over reports of an assault with a frying pan. Once on the scene, police said, the suspect was taken into custody while the victim was “treated & released” at the school.

Montgomery County Police were called to the school on 7100 Whittier Blvd. at around 10:41 a.m. over reports of an assault using a frying pan. (Google)

A letter from the school that went home to parents alleged that Cutchember was arguing with a 15-year-old student when he hit the victim over the head with the pan.

It’s not clear what started the altercation or where the frying pan even came from but the school said that campus security was able to intervene and break up the fight, FOX5 reported.

Pattie LaBelle Is Ready For A Boo