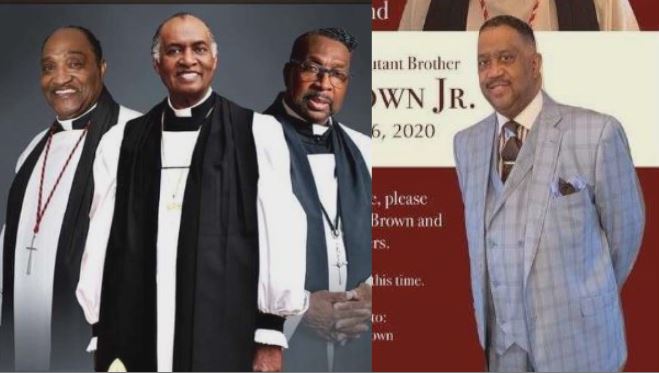 When the Rev. Jonathan Wynne thinks about his long-time pastor, Bishop P.A. Brooks, his mind goes beyond the walls of New St. Paul Tabernacle Church of God in Christ....
by Zach Freeman June 15, 2020 857 Views

When the Rev. Jonathan Wynne thinks about his long-time pastor, Bishop P.A. Brooks, his mind goes beyond the walls of New St. Paul Tabernacle Church of God in Christ.

Brooks pastored the Detroit church for 63 years, but his reach extended far beyond the building, which sits on the Southfield freeway service drive near Fenkell, along a stretch of road now named in his honor.

One of the highest ranking leaders of the Church of God in Christ, Brooks was a champion for civil rights and economic justice. View|27 PhotosDetroit’s religious community hit hard by COVID-19

“He was not afraid to speak truth to power,” Wynne said. “He stood up for those who didn’t have a voice.”

Brooks died April 9. The grief and pain felt by his congregation and denomination is being experienced by many Black churches that have lost leaders to COVID-19. Brooks’ family said they would rather focus on his life than whatever caused his death.

Nonetheless, the losses are particularly grievous because Black church leaders have historically been at the forefront of the community guiding activism aimed at improving the lives of Black Americans — a community hit disproportionately hard by the deadly virus.

As of Sunday, COVID-19 had sickened at least 11,305 Detroiters, resulting in 1,420 confirmed deaths of the virus, most of them Black.

“We look to our religious leaders to provide us with a way forward, and for African American pastors that has never been only in a spiritual sense,” said Terri Laws, a Black church scholar at the University of Michigan-Dearborn.

“The church has been wounded,” Laws said. “This illness has wounded a core part of what it means to be African American.”

The Church of God in Christ, the oldest and largest predominantly African-American Pentecostal denomination in the United States, lost two of its top bishops — both from Michigan. In addition to Bishop P.A. (Phillip Aquilla) Brooks, Bishop Nathaniel Wells Jr., a prominent civic and religious leader in Muskegon, passed March 24.

“A total of seventeen Bishops have died since January 2020; twelve of those since March 1. In addition to these bishops, our organization also regrets to report the loss of several pastors, elders and congregants,” states a post on the denomination’s website.

In Flint, Bishop Robert Earl Smith Sr., pastor Kevelin Jones, both of Bountiful Love Ministries, and Elder Freddie Brown, a religious leader at Jackson Memorial Temple Church of God in Christ, passed within days of each other in March.

Among other prominent Detroit leaders within the COGIC who have passed is the beloved Mother Willie Mae Sheard, who was a prominent leader of women’s ministries within the denomination. Greater Mitchell Temple Church of God in Christ, pastored by her husband, Bishop John H. Sheard, hosted a special community service day — that included free COVID-19 testing — in her honor June 3. Bishop Sheard himself is recovering from a serious bout of the disease.

The Church of God in Christ isn’t alone in losing leaders to COVID-19.

The effect is devastating, said the Rev. Oscar King, pastor of Northwest Unity Missionary Baptist Church, who’s also the past president of the Council of Baptists Pastors in Detroit and Vicinity.