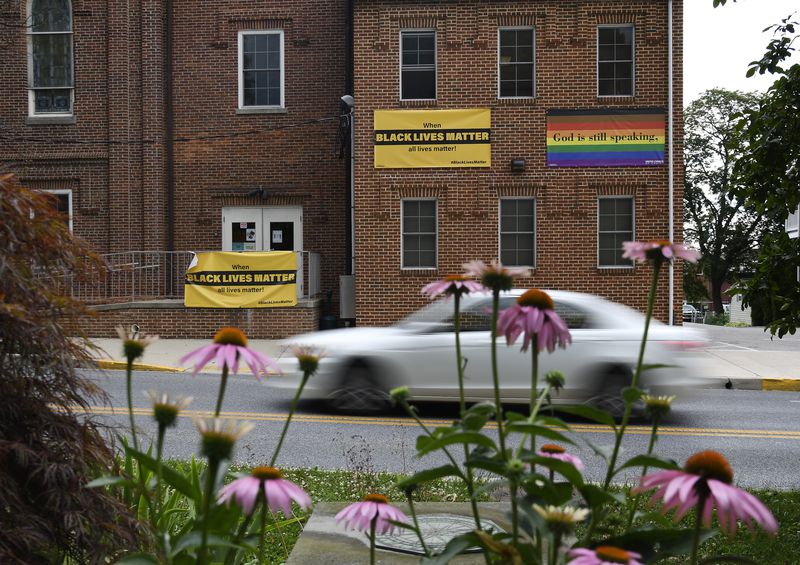 St. Paul’s United Church of Christ in Westminster now has two “Black Lives Matter” signs adorning the outside of its building ― a new one, made and delivered in...
by Zach Freeman July 13, 2020 181 Views

St. Paul’s United Church of Christ in Westminster now has two “Black Lives Matter” signs adorning the outside of its building ― a new one, made and delivered in less than 24 hours, and the previous one that was taken down Sunday evening in what one church member described as a hate crime.

Lisa Macurak, a member of the St. Paul’s church council, said her daughter drove past the church Sunday and spotted a man on a ladder in front of the building. When the two returned to the church, they said the man was still on the ladder, removing a yellow “Black Lives Matter” sign from its fastenings along the building’s Green Street facade.

Macurak’s daughter used her cellphone to record video and take pictures, they said, because they felt Macurak was being threatened. Macurak said she called 911 and reported the incident.

“This guy came up with a ladder, cut the sign down,” D’Antuono said Monday. He said the sign fell to the ground and was left there.

The man, later identified as Wilson, was followed to his residence afterward on Sunday and police were alerted. When police came knocking, Wilson said he pleaded the fifth, presumably referring to the Fifth Amendment, and shut the door, according to D’Antuono.

An arrest warrant had yet to be served Monday, online court records showed. No contact information was available for Wilson.

“I consider it to be a hate crime. It’s not just vandalism,” Macurak said. “Just the idea that someone would feel that they could deface church property, that they could take it upon themselves. … We really worked a long time on the church council to discuss how we wanted to word that sign, to say that it’s obvious [that] we want to be allies to Black lives. We feel that there are injustices, and that all lives do not matter at the moment.

When big news breaks, be the first to know.

Sarah Ramsland is summer minister at St. Paul’s, filling in while senior pastor Marty Kuchma is on sabbatical. Ramsland sent an email Monday morning to churchgoers letting them know about Sunday’s incident.

“Once that sign came down and the police left, we hung it right back up on the banister,” Ramsland said. “If it comes down again, we’ll put the old one up next to the other old one and hang a third one up. We’re that steadfast in this work.”

Church staff members said the same man returned to the area Monday afternoon and was shouting from within Belle Grove Park, across the street from the church. Police were called back to the scene, they said, to talk with the man.

Macurak and Ramsland both praised Westminster police for their help.

Lord Industries, a Westminster-based company that makes banners and signs, crafted a new Black Lives Matter sign for the church. Staff members came together to put it up Monday afternoon in the spot where the original sign was taken down.

“Perhaps this will start something with this man, or with other people in the area that are curious about what it means to say ‘Black Lives Matter,‘” Ramsland said.

Zindzi Mandela, daughter of Nelson and Winnie Mandela, dead at 59