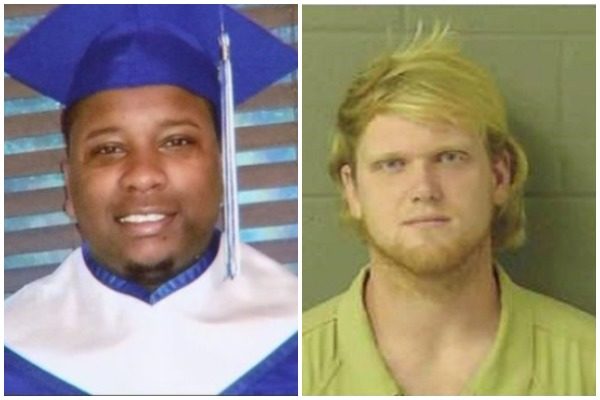 Man on the Run After Running Over, Killing Special-Needs Black Man at Nearly 100 MPH Following Fight Over Girl!

Georgia authorities are on the hunt for a man accused of intentionally running down and killing a developmentally disabled man following a dispute at a Fourth of July gathering...
by Joy Smith July 9, 2019 220 Views

Georgia authorities are on the hunt for a man accused of intentionally running down and killing a developmentally disabled man following a dispute at a Fourth of July gathering on Thursday.

The deadly incident unfolded at a home on North Lake Drive in Covington, where witnesses say Joshua Anderson flew into a jealous rage after Kevin Marshall, 20, talked to his girlfriend, CBS 46 reported. A fistfight ensued.

Partygoers managed to break up the scuffle and Marshall left. As he walked home, however, Anderson reportedly got in his Toyota pickup, sped down the road and barreled into Marshall before fleeing the scene.

“I’m so angry that my son was knocked from that fence to right here,” said Marshall’s mother, Robbie Marshall, motioning to the spot where her son was mowed down and killed. “He knocked his breath away.”

“That’s hatred, to beat somebody and then run him over at that impact and keep going,” she added.

Mashall remembered her son as a “sweet boy” who never got into fights or was disrespectful toward anyone. She said Kevin also suffered from ADHD and had the mental capacity of a 13-year-old.

Joyce Canup, who witnessed the fatal collision, told Atlanta station WSB-TV that Anderson was going nearly 100 mph when he struck the young man.

“He hit the guy, and when he hit him, he flew up over the truck,” Canup recalled.

Anderson, who was visiting his girlfriend’s home at the time, fled the scene and hasn’t been seen since. According to FOX 5 Atlanta, a missing person’s case has also been filed for the suspect’s girlfriend, Kendra Browning. Some family members claim Browning left willingly with Anderson on his run from the law, and are now concerned for her safety.

Newton County authorities later issued a “Be On the Lookout” for the  suspect. 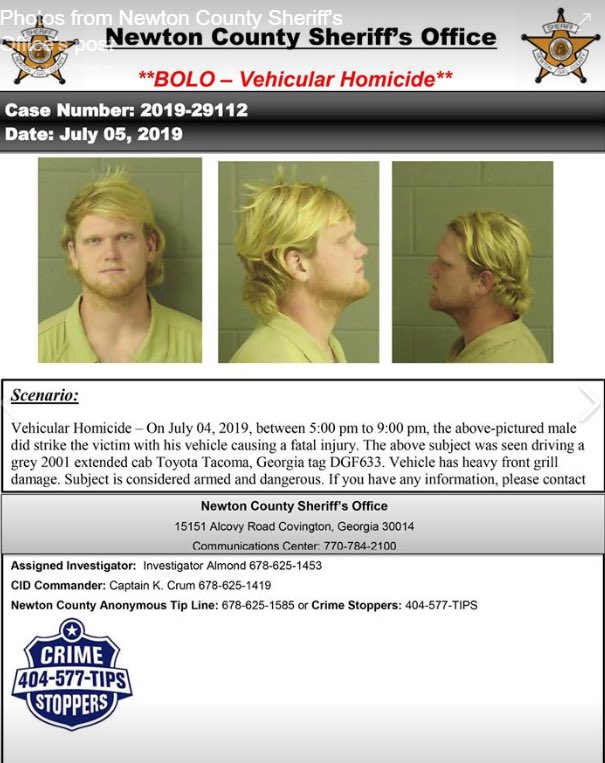 He’s accused of hitting a special needs man and killing him, then leaving the scene. Deputies are searching for him. Witnesses explain what happened before this incident. That’s at 6 @wsbtv wsbtv

“We don’t know where she’s at, we don’t know nothing,” her father told the station on Friday. “I’m pretty sure [he’s with her now].”

Investigators said Anderson is considered “armed and dangerous.” His gray 2001 Toyota Tacoma was recovered not far from where he struck and killed Marshall last week. Samantha Browning, Kendra’s mother, said the couple was over at her house earlier that night and recalled the moment she heard the what she thought was a single car crash.

“I heard a boom and I thought he wrecked his truck,” she said. “When I got down here, that kid was laying on the ground.”

At a vigil for her son on Sunday, Robbie Marshall demanded justice in what she believes was a hate crime and urged Anderson to turn himself in.

“He took my son’s life, he deserves not to have his,” she said. “I want him to have the death penalty. I feel an emptiness nobody can replace.”

The U.S. Marshal’s Office has since joined the search for Anderson. If caught, he faces charge charges of first-degree vehicular homicide, serious injury by vehicle and hit-and-run. He is also wanted for malice murder.

Anyone with information on Anderson’s whereabouts are asked to contact the Newton County Sheriff’s Office at (678) 625-1400 or Atlanta Crime Stoppers at (404) 577-TIPS.

Florida man dies after getting bitten by dogs 100 times on shortcut home!