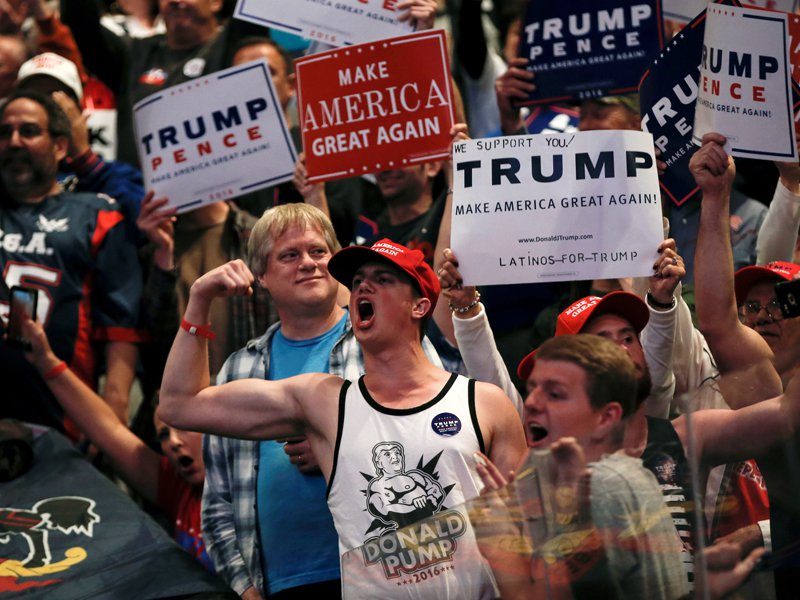 A majority of Republicans believe President Trump is being framed by the FBI and the Department of Justice, according to a new poll. The Economist/YouGov poll shows 61 percent...
by Zach Freeman May 10, 2018 747 Views 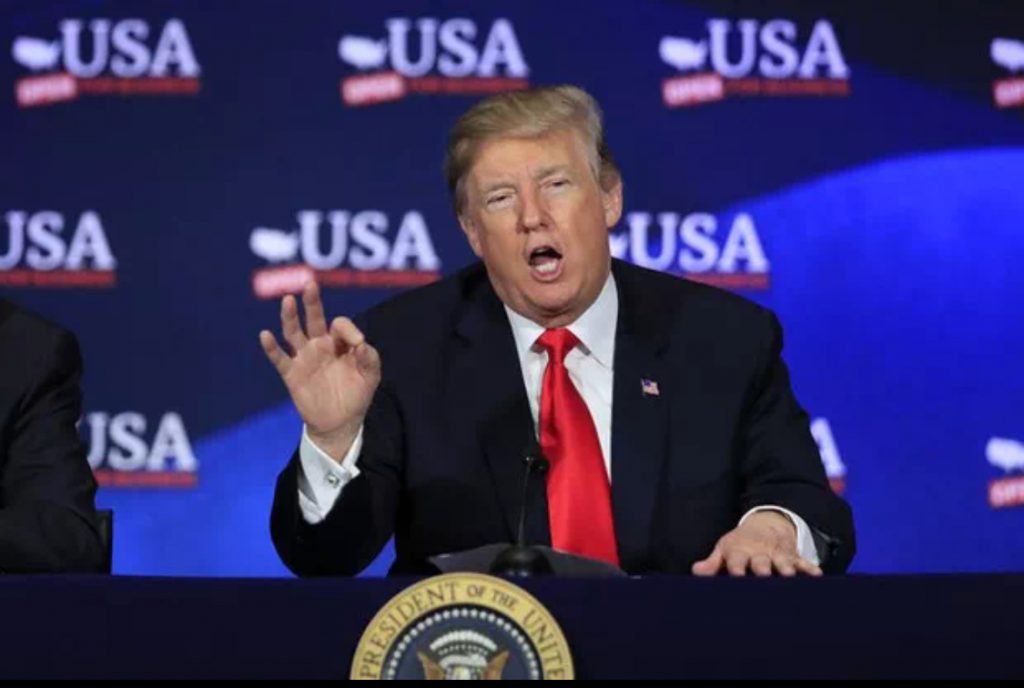 A majority of Republicans believe President Trump is being framed by the FBI and the Department of Justice, according to a new poll.

The numbers are vastly different among Democrats. Only 7 percent of Democrats said the president was bring framed compared to 78 percent who said he was not. Fifteen percent weren’t sure.

Among all voters, 29 percent believe the agencies were targeting Trump compared to 45 percent which said they weren’t. Twenty-six percent weren’t sure.

Division among the parties continued when voters were asked if they felt Trump had committed a serious crime. Only 8 percent of Republicans said “yes,” compared to 69 percent of Democrats and 32 percent of independents.

The Economist/YouGov poll included results from 1,500 adults with a margin of error of 3 percentage points.

Two Republicans who have served on the Alabama Supreme Court for more than a decade carry contrasting messages and styles into the race for chief justice.

Chief Justice Lyn Stuart, who replaced Roy Moore in the court’s top job, says she brings no agenda other than making a court system that faces funding and staffing challenges the best that it can be.

Stuart’s opponent, Associate Justice Tom Parker, says state courts can be vehicles for eventually reversing U.S. Supreme Court decisions that he said have undermined the Constitution. Parker is a longtime ally of Moore and has said Moore was “unlawfully removed from office.”

The winner of the June 5 primary will face the Democratic nominee, Jefferson County Circuit Judge Bob Vance, in November. Vance is unopposed in his party.

Voters elected Stuart to the Supreme Court in 2000 and reelected her twice, giving her the longest tenure of the nine justices.

Last year, Moore lost an appeal of his suspension and resigned to run for the U.S. Senate. Gov. Kay lvey appointed Stuart to replace him, and now she is seeking a full, six-year term in the court’s top post.

Stuart said the job carries most of the responsibilities of an associate justice plus the duties that come with being the administrative leader of the state court system.

“There are some decisions that only the chief justice can make,” Stuart said. “So I’m pretty hands-on with everything.”

Stuart spent eight years as a district judge and four years as a circuit judge in Baldwin County. Stuart says that experience as a trial judge, which Parker does not have, helps her in reviewing cases and in administrative decisions.

“Much of what we do is evaluate the performance of a judge,” Stuart said. “Did the judge get it right? Did the judge get it wrong? And part of that is understanding what it’s like to be in a courtroom.”
Parker was deputy administrative director and general counsel for the Alabama court system and an assistant attorney general under AGs Jeff Sessions and Bill Pryor before voters elected him to the Supreme Court in 2004. Voters reelected Parker in 2010 and 2016.

Parker said he’s proud to be a friend of Roy Moore, who was twice removed from the office Parker seeks.

“I have great admiration for the reverence in which he holds the Constitution and his willingness to stand on issues that are definitive for our future,” Parker said.

Like Moore, Parker was the target of an ethics complaint by the Southern Poverty Law Center to the Judicial Inquiry Commission. The SPLC said Parker violated prohibitions on judges talking about pending or impending cases and undermining public confidence in the judicial system when he made comments about the U.S. Supreme Court’s ruling on same-sex marriage during a radio interview in 2016. Parker was a candidate for reelection as associate justice at the time.

The radio host asked Parker what would happen if a state Supreme Court refused to accept the U.S. Supreme Court’s decision in Obergefell v. Hodges, which legalized gay marriage.

“I doubt that it would be a blanket defiance of all jurisdiction of the U.S. Supreme Court, but in regard to the Obergefell decision, where it’s clear that they jumped outside of all the precedents in order to impose their will on this country, that yes, resisting that decision could maybe start a revival of what we need in this country to return to our original founding principles,” Parker said, according to the SPLC complaint.

The JIC dropped the complaint. But before that, Parker filed a federal lawsuit claiming that the prohibition on speaking about cases pending or impending in any court violated his free speech rights as a judicial candidate.

In March, U.S. District Judge W. Keith Watkins granted, in part, Parker’s request for a preliminary injunction against enforcement of the prohibition on speaking about cases, finding that it was too broad. Parker’s lawsuit is ongoing.

“It’s a travesty of the judicial system,” he said. “We had five justices on that court really impose their political will on America.”

As for the Roe v. Wade decision, which held that a woman’s right to have an abortion was protected by the Constitution, Parker said, “It was just invented out of whole cloth just to satisfy a political agenda.”

Parker said the ideological balance of the nation’s high court could tip in what he considers a favorable direction. Parker said decisions by state courts could then help drive change.

“President Trump is just one conservative appointment away from giving us a conservative majority on the U.S. Supreme Court,” he said. “And they’re going to need decisions that they can use to help reverse some of the travesties, the political decisions of the past.”

Stuart said she opposes abortion and believes marriage is between one man and one woman but does want to talk about specific cases related to those beliefs.

“I’m pro-life and I believe in traditional marriage,” Stuart said. “And beyond that, I’m not sure that I should speak directly to specific court decisions.”

Stuart said she did not want to say anything that could cause her to have to recuse in a case.

“I think it’s too important for me to sit on the cases and make decisions,” Stuart said.

As chief justice, Stuart has the role of advocate for the court system with state lawmakers, who determine the budget.

Stuart said the state’s courts have endured lean years but have fared better recently. She says funding and allocation of personnel are the top challenges.

“That’s what we’ve been working on the last two years,” Stuart said. “The Legislature, again, in each of the last two sessions has been generous with us. They’ve given us monies that we need. It’s not all that we need but it’s enough to move us in the right direction.”

Stuart said some circuits have used local funds to help pay employees’ merit raises since 2014 while others could not afford that. Starting Oct. 1, the court system will have state funding to replace those local supplements and raise employees in the other circuits to the same level.

“It will allow those circuits that had those local funds to use them for other purposes, whatever they may choose to use it for,” Stuart said.

Parker said the state court system has been underfunded for too many years.

“We’re still limping along,” Parker said. “If you limp for a while you learn how to limp. We’re surviving in that mode right now.”

Parker said he could be a strong advocate because of his experience lobbying the Legislature when he was the founding executive director of the Alabama Family Alliance, now called the Alabama Policy Institute.

“I’m comfortable in that arena and I will go after it,” Parker said.

Parker declined to put an estimated percentage on how much more money is needed. He said the biggest needs are in circuit clerk’s offices.

“We just need to flesh out this system again so it can function as it was designed to function and as Alabama needs it to function,” Parker said.

Last year, the Legislature created a commission to reallocate judges to fit caseloads. Stuart said there are more judges than needed in Jefferson County and too few in other areas, including Madison, Mobile, Autauga, Chilton, Elmore, Lee and Tuscaloosa counties.

The reallocation legislation will allow judgeships to move according to need starting in 2020. Stuart estimates it will take until 2030 to complete the realignment because the law requires changes to be gradual.

“It will just be such a slow progression,” Stuart said. “But it is a beginning.”

Parker said misalignment happened because the Legislature established judgeships based on political clout and that it’s causing a strain in some circuits.

“There are pockets where it’s really hard to keep pace right now,” Parker said. “But with judicial reallocation, hopefully we can provide them some relief.”

The two candidates agree that criminal sentencing guidelines passed by the Legislature a few years ago have generally worked. Alabama’s prison population has declined because of more emphasis on probation and other prison alternatives for certain nonviolent crimes.

The guidelines were intended, in part, to make sentencing more uniform.

“I have to say that I was a little bit skeptical at first because I truly believe in judicial discretion,” Stuart said. “But I’ve actually done some of those calculations based on the new sentencing guidelines. It seems to work out pretty well.”

“We’ve either got to reduce the prison population or build new prisons or risk a federal takeover,” Stuart said.

Parker said it’s important for judges to retain discretion on sentences because they can discern from experience the relative seriousness of criminal acts. But he said the guidelines are generally achieving their intent of reducing wide variations in sentencing for similar offenses.

“We’re seeing judges more comfortable with it,” Parker said. “Whenever you change a system it’s a learning process. And there are some who don’t want to change and we’ve gone through part of that transformation. And now we’re just trying to get people to think within this new framework and help make recommendations to fine-tune it.”

Parker said he enjoys taking his campaign message across the state and reconnecting with people he’s met during previous campaigns.

He embraces the criticism and attention he has drawn for speaking out on legal issues, noting the SPLC complaint and a 2014 article by ProPublica that said his legal writings posed a threat to abortion rights.

“Those who are not taking strong stands don’t draw enemies,” Parker said. “And I think it speaks volumes to Alabama voters that a man shall be known by his enemies.”

Stuart said she hopes voters are paying attention to the chief justice race because of the importance of the court system and how it eventually touches most people.

“My only goal as being chief justice is to give Alabama the very best court system we can have, one that serves the people of Alabama well, that serves the litigants, regardless of where they’re from when they come to the courtroom,” Stuart said. “One that would be recognized as outstanding nationally and one that my children and grandchildren can be proud of.”

Family: Married to the former Dottie James of Auburn for 36 years.

Pence calls on Mueller to ‘wrap up’ Russia probe