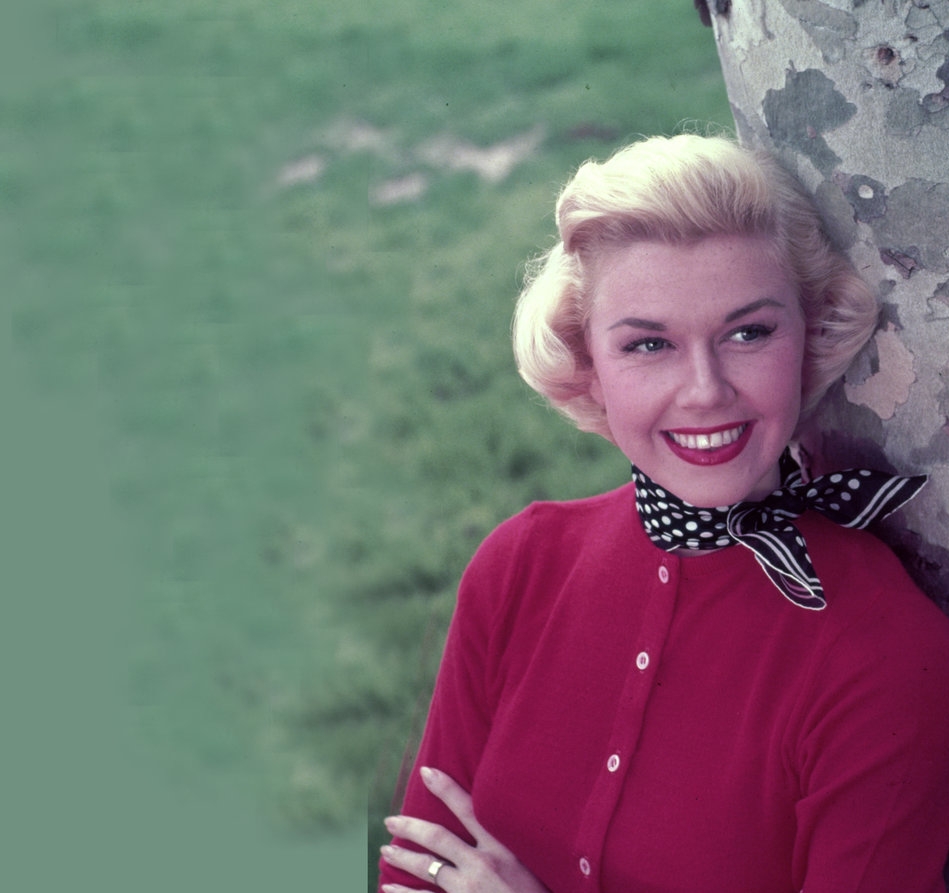 A promotional portrait of American singer and actor Doris Day smiling as she stands behind a microphone, from director Michael Curtiz’s film, “Young Man with a Horn.” (Hulton Archive/Getty Images)...
by Joy Smith May 13, 2019 590 Views

A promotional portrait of American singer and actor Doris Day smiling as she stands behind a microphone, from director Michael Curtiz’s film, “Young Man with a Horn.” (Hulton Archive/Getty Images)

Doris Day, the perennial girl-next-door whose career as a singer and actress spanned almost 50 years and made her one of the biggest box Hollywood stars and most popular entertainers in the United States has died. She was 97.

The Doris Day Animal Foundation confirmed Day died early Monday at her Carmel Valley, California, home. The foundation says in an emailed statement she was surrounded by close friends and “had been in excellent physical health for her age, until recently contracting a serious case of pneumonia.”

She was known for her honey-voiced singer and actress whose film dramas, musicals and innocent sex comedies made her a top star in the 1950s and ’60s and among the most popular screen actresses in history.

Day’s lilting voice, wholesome blond beauty and ultra-bright smile brought her a string of hits, first on records and later in Hollywood.

Despite her seemingly perpetually sunny and smiling exterior, Day’s life took a number of tragic turns, including the death of her only child, three divorces and the death of another husband who turned out to have squandered her earnings, leaving her deeply in debt.

In later years, she lived quietly near Carmel-by-the-Sea, California, where she was an animal welfare activist and founded the Doris Day Animal Foundation.

At one point she had 30 dogs living in their own area of her house but by April 2012, was down to six dogs and four cats.

Day was associated with any number of recordings, but her most famous and signature song was “Que Sera Sera” (“Whatever Will Be, Will Be”) from Alfred Hitchcock’s 1956 film “The Man Who Knew Too Much.”

In a 2012 interview with NPR, Day admitted her initial reaction was “I didn’t think it was a good song.” But when it became wildly popular, she said, “I realized maybe it isn’t a favorite song of mine but people loved it. And kids loved it. And it was perfect for the film, So I can’t say it’s a favorite song of mine, but boy, it sure did something.”

Among her other well-known songs were “Secret Love” and “Everybody Loves a Lover.” In movies, Day was Hollywood’s quintessential “girl next door,” with a sometimes sophisticated edge. Her leading men included Rock Hudson, Cary Grant, David Niven, Rex Harrison and James Garner.

Rock Hudson (1925-1985), US actor, wearing white trousers and a light blue short-sleeved shirt, and Doris Day, US singer and actress, in a pink gingham dress, both reclining on a sofa, laughing and holding drinks, circa 1960. (Photo by Silver Screen Collection/Getty Images)

In fact, such was her wholesome image, entertainer Oscar Levant, famed for his mordant wit, once said, “I knew Doris Day before she became a virgin.”

Among her most popular films were three romantic comedies she did with Hudson: “Pillow Talk” (1959), which brought her an Academy Award nomination for Best Actress, “Lover Come Back” (1961) and “Send Me No Flowers” (1964).

She also starred in several beloved musicals, including 1953’s “Calamity Jane” and 1957’s “The Pajama Game” as well as comedies like 1960’s “Please Don’t Eat the Daisies” and the drama “Midnight Lace,” also from 1960.

Day reportedly turned down the role of Mrs. Robinson in “The Graduate,” a part that eventually went to Anne Bancroft.

American singer and actress Doris Day in an exuberant pose with her arms outstretched, circa 1990. (Photo by Terry O’Neill/Iconic Images/Getty Images)

Day was born Doris Mary Ann Kappelhoff on April 3, 1924 in Cincinnati, Ohio and was named in honor of Doris Kenyon, a silent screen star.

As a teenager, while recovering from injuries she suffered in a car crash, Day began to sing along with the radio, showing enough talent that her mother hired a singing teacher. She soon got a job as a girl vocalist with bandleader Barney Rapp, who suggested her last name was too unwieldy for marquees and so she changed it to Day after the song “Day After Day.”

Day worked with other bandleaders, including Les Brown, and by early 1945 had released her first hit recording “Sentimental Journey.”

Within three years, she made her first film appearance in “Romance on the High Seas.”

Day had one child, Terry Melcher, whose biological father was Jorden but who was adopted by Melcher. Terry Melcher died in 2004 of melanoma. When Martin Melcher died, Day discovered he and his business partner had decimated her earnings and left her deeply in debt.

CARMEL CA, – JULY 16: Doris Day with her grandson Ryan Melcher 4, the son of her only child Terry Melcher at a press conference at the hotel she owns in Carmel, California July 16, 1985 ( Photo by Paul Harris/Getty Images )

He also had committed her to a television series, which she later said she had no interest in doing but felt obliged to honor Melcher’s agreement.

Steph and Curry parents’ have to choose how to rep boh sons in the Western Conference Finals!