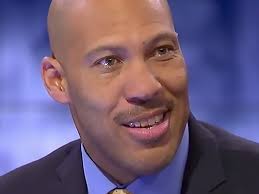 LaVar Ball’s confounding parenting tactics go beyond the father-son dynamics he’s made his life. He also advises his sons on how to treat — or, if they want, mistreat...
by Katricia Brown June 9, 2017 598 Views 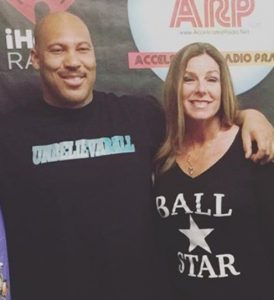 LaVar Ball’s confounding parenting tactics go beyond the father-son dynamics he’s made his life. He also advises his sons on how to treat — or, if they want, mistreat — their mother.

The brash basketball father, who shared a rare moment of vulnerability in May when he opened up about his wife Tina’s health issues, dove a little deeper into the role of the one member of the Ball family who’s stayed out of the spotlight. Following Ball’s twisted logic, the three sons apparently learned to refrain from misogynistic insults against their mom only so they could get what they needed from her.

“I told them, ‘If you’re going to be disrespectful to your mom, I want you to be all the time.’ So, excuse my language right here, but if you want to say, ‘Good morning, b—-,’ that’s fine with me,” Ball said Thursday in an interview with ESPN at the family’s home in Chino Hills, Calif.. “I’m not going to say nothing. If you want to call your mom a b—-, that’s fine. But don’t get sick, when your stomach is hurting and you want me to care for you because you know I ain’t. … She’ll clean up the throw-up, the s–t, whatever. She’ll take care of what you want. … So don’t wait until you need something, or you need her to make you something, and now you want to be nice to her. …

“So they never disrespect their mom or talk back to her or say nothing. Because I say, ‘In the long run, you’re going to need her before you need me.’”

When it came to the boys breaking his rules, LaVar said he had no problem using physical punishment — “a couple of hits upside the head” to NBA-bound Lonzo after he missed curfew and had a run-in with police or using a “belt or something” on youngest son LaMelo — before quickly backtracking.

“I spanked them once,” Ball said as clarification, “to let them know there are repercussions at times. But my boys are respectful, and usually my voice is enough.” 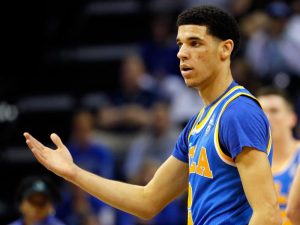 Ball’s voice has been ringing in the ears of the basketball world since son Lonzo emerged as a star guard at UCLA and an expected top-two pick in the NBA draft on June 22.

Tina, meanwhile, has been trying to regain her speech after she suffered a stroke in February that hospitalized her for about three months and damaged her verbal abilities.

Ball said he’s been monitoring Tina since she returned home and feels confident he can restore her strength while their sons continue doing what they were raised to do: play basketball.

“Like I told my boys: ‘I got her. Now you can do whatever you want to do. What I’m not going to is burden you with sitting there rubbing her hand. … We’re not making a movie,’” he said.

“That’s my wife, and I take care of her. She wants to talk, and she can get out a few words. I’m rebooting her now right now. She’s saying, ‘LaVar, you’re right. You are right.’ That’s all I want to hear her say. Now we can get another 25 years having a good time. She is going to get better with me.”

Although Tina won’t be feeling well enough in time to attend the draft, Ball said, there’s no doubt in his mind Lonzo will wind up a Laker. And that assumption is only the first part of the equation. Next up in Ball’s wildly optimistic mind: 18-year-old LiAngelo and 15-year-old LaMelo will go “one-and-done” and find their way to Los Angeles at any cost.

9 Breakup Texts That Will Help You End Any Type of Relationship, So You Can Stop Ghosting Already

This teacher has a payoff BIGGER than her salary! Check out why! HERE!