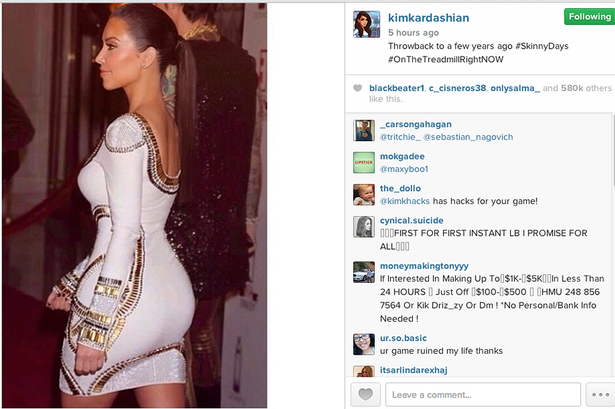 Kim Kardashian West said Instagram’s idea to remove “likes” could be beneficial to a person’s mental health. The reality TV star and social media queen — whose selfies and pictures of her...
by Raquel Jayson November 9, 2019 381 Views

The reality TV star and social media queen — whose selfies and pictures of her children have garnered her more than 200 million followers across her social media platforms — opened up about the new feature the Facebook-owned photo-sharing service is testing, according to People.

“As far as mental health … I think taking the likes away and taking that aspect away from [Instagram] would be really beneficial for people,” she said at The New York Times DealBook Conference in Manhattan. “I know the Instagram team has been having a bunch of conversations with people to get everyone’s take on that and they’re taking it really seriously, and that makes me happy.”

Kardashian West said though she doesn’t personally struggle with mental health issues in relation to Instagram likes, she firmly believes that having the feature will help many others who do.

This new feature, which has only been tested in a few markets, would hide how many likes people’s posts attain as Instagram tries to combat criticism that such counts hurt mental health and make people feel badly when comparing themselves to others. People can still see how many people liked their own photos, but they won’t see counts for other people’s posts.

One group that may be affected is Instagram “influencers,” the major, minor or micro-celebrities who use social media to market products and otherwise influence their followers.

However, Kardashian West, who is known as being one of the first public figures to monetize her digital platforms and who received an Influencer Award at the 2018 Council of Fashion Designers of America Fashion Awards, is in favor of the change.

“Kim is the most important and powerful influencer in the world. Her reach extends far beyond her own brands,” CFDA board member Tommy Hilfiger said.

Mental health has been an important topic for Kardashian West who launched her first Facebook fundraiser in 2018 on behalf of the Child Mind Institute. The nonprofit is “dedicated to changing the lives of kids with mental health issues or learning difficulties.”

Instagram has been running the test in Canada since May. Now, Facebook said the test has been expanded to Ireland, Italy, Japan, Australia, Brazil and New Zealand.

The company would not comment on what it’s learned from the Canada test or if it has plans to expand it to the U.S. any time soon.

Funeral to be held for veteran killed in violent Atlanta carjacking