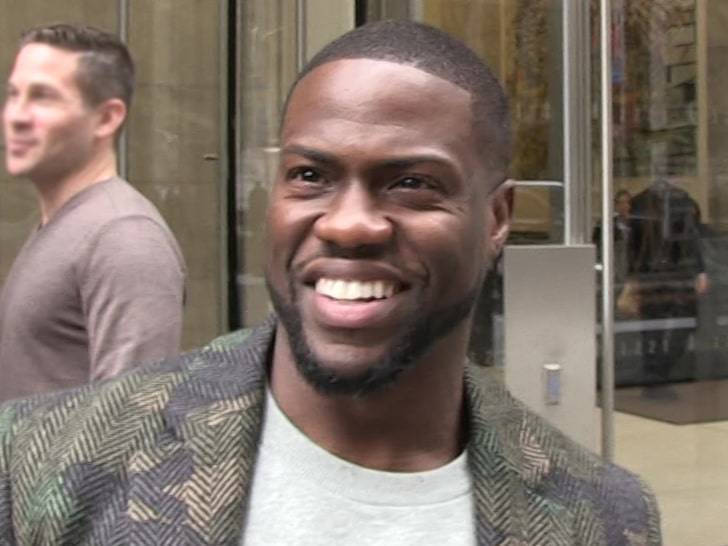 Kevin Hart is getting back to his famous “Hustle Hart” mode after his horrific car accident — but he’s not rushing into anything intense — like full action scenes —...
by Raquel Jayson October 9, 2019 167 Views

Kevin Hart is getting back to his famous “Hustle Hart” mode after his horrific car accident — but he’s not rushing into anything intense — like full action scenes — just yet.

Sources connected to Kevin tell TMZ … he’s reported to work this week to promote the upcoming ‘Jumanji’ sequel in a new marketing campaign, which clearly required his presence, because he’s nowhere near 100 percent yet.

Ever the trooper though, we’re told Kevin is committed to fulfilling his commitments as best as he can. For example, our sources say Kevin did 2 hours of shoots on set Monday, another 2 hours Tuesday, and will be back for another couple on Thursday.

We’re told Kevin has not been in full costume for these shoots and he’s not walking much for them either — sitting through most of the day — even though he can walk on his own these days.

Everyone else on set — including The Rock, Jack Black, Nick Jonas and others — have been doing full days themselves. Of course, they’re not recovering from a near-fatal wreck.

As we reported … Kevin’s out of the hospital and back home, where he’s been getting outpatient care since late September. He has a physical therapist who comes by to work with him, and he’s been easing back to full health with approved exercises.THE CRASH SCENELAUNCH GALLERYBackgrid

TMZ broke the story last month when Kevin’s custom-built muscle car — driven by a friend — ended up in ditch off Mulholland Highway … leaving Kevin with 3 spinal fractures that required surgery to fuse them.

It was already a miracle he even survived, and Kevin getting back to the grind less than 6 weeks later is the same.

Suspect arrested in deadly shooting outside Atlanta’s Stonecrest Mall; 2 Still On The Run