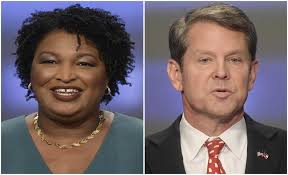 Kemp introduces transition team, Abrams says she will push on!

In his first public remarks since declaring victory in the Georgia governor’s race, Brian Kemp said it is time to move forward.  His opponent and her team, however, said...
by Joy Smith November 9, 2018 274 Views

In his first public remarks since declaring victory in the Georgia governor’s race, Brian Kemp said it is time to move forward.  His opponent and her team, however, said Thursday it is still too early to tell who won the election.

Attorneys on the legal team for Democrat Stacey Abrams announced they have filed a lawsuit in Dougherty County because of problems there with absentee ballots, partly due to Hurricane Michael.  They have also issued litigation holds across the state to preserve any possible evidence for the future.

As of Thursday evening, Kemp leads his opponent by about 63,000 votes.  According to the Abrams campaign, an additional 25,000 votes in her favor would trigger a runoff.

Kemp maintains that there are only about 20,000 ballots that still need to be counted.

“Even if she got 100 percent of those votes, we still win,” said Kemp.  “The votes are not there for her.  I certainly respect the hard-fought race that she ran, but that’s a decision that she’s going to have to make.  But we’ve won the race.  It’s very clear now and we’re moving forward with the transition.”

The Abrams camp, though, said there is no way for Kemp nor the Secretary of State’s Office to know how many votes are outstanding because the deadline for military and overseas ballots is not until Friday.  They also said that vote totals in some counties, like Cobb, have continued to change even though the Secretary of State’s website previously showed 100 percent of votes had been counted.

“The dereliction of duty, the abuse of power and the outright corruption of this situation is catastrophic for the state and for the future of the state,” said Lauren Groh-Wargo, Abrams’s campaign manager.

Shannon Sharpe celebrates with Hennessy and a smoke LIVE on Undisputed !

Middel School student arrested for bringing a gun to school!