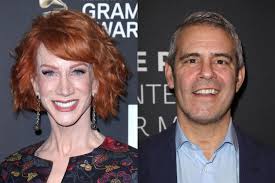 Kathy Griffin Slams Andy Cohen As One Of The ‘Worst’ Bosses In Hollywood!

Kathy Griffin slammed Andy Cohen as a boss when she talked about her time having a talk show on Bravo and working with him. Kathy Griffin, 58, is never...
by Joy Smith July 17, 2019 180 Views

Kathy Griffin slammed Andy Cohen as a boss when she talked about her time having a talk show on Bravo and working with him.

Kathy Griffin, 58, is never one to hold back. And this time around, she came for former boss Andy Cohen, 51. “Andy Cohen treated me like a dog,” Kathy said on PEOPLE Now, about her time with the Bravo network as a reality star and talk-show host. “He was, like, one of the worst bosses I ever had,” she said.

“And also, you know, the guy… he decides the entire slate at Bravo, and yet he gave himself a talk show [Watch What Happens Live] that magically gets renewed every year,” Kathy continued. “So you know, I had a talk show at Bravo for two years that got cancelled. And I thought yeah… it’s sort of competition for Andy,” Kathy claimed about a potential reason her show could have been cancelled. “So, no has not been very kind.”

Kathy’s talk show, Kathy, ran for two seasons on Bravo. She also had her own reality show on the network titled My Life on the D-List, which ran from 2005 to 2010. And of course, Andy’s talk show is loved by the Bravo audience, and he also is the creator of the Real Housewives series.

We know Andy’s not shy of clapping back himself, so we wonder if he’ll speak on Kathy’s comments. We’ll for sure keep our eyes peeled to his Twitter and Instagram for any updates – and of course, for updates of baby Benjamin, as well. But, honestly, the best way to confront this? Have Kathy on Watch What Happens Live so these two can talk it out for everyone to listen to!