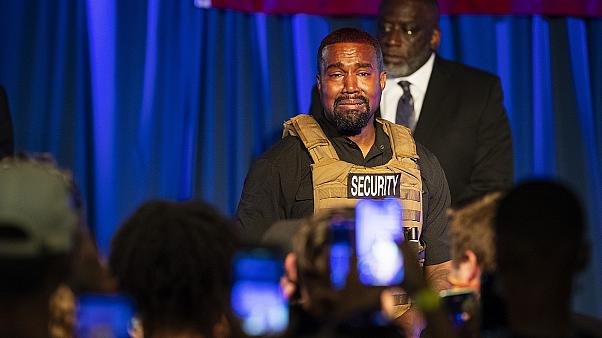 Kanye’s First Presidential Rally Was More Like A Church Service

In his first presidential campaign rally, Kanye West ranted and raved for nearly an hour straight about everything from abortion to slavery. The rapper, 43, spoke to a crowd in North Charleston,...
by Raquel Jayson July 20, 2020 174 Views

In his first presidential campaign rally, Kanye West ranted and raved for nearly an hour straight about everything from abortion to slavery.

The rapper, 43, spoke to a crowd in North Charleston, South Carolina, on Sunday, July 19, two weeks after announcing his bid for the White House. During the rally, which was combative and at times emotional, West wore a bulletproof vest and had “2020” shaved in his hair.

In addition to his rambling speech, the Grammy winner raised eyebrows on social media for briefly mentioning Michael Jackson and Bill Cosby with a laugh, yelling at attendees who clapped while he was speaking and arguing with people in the room.

The Yeezy designer tweeted on July 4 that he planned to run for president and filed paperwork with the Federal Election Commission 11 days later. He is running under the self-created Birthday Party and has said that Wyoming-based preacher Michelle Tidball will be his running mate.

West, who was previously a vocal supporter of President Donald Trump, told Forbes on July 7 that he has never voted in his life and was not registered to vote until earlier this month.

The “Heartless” singer also told the magazine that he has the support of tech entrepreneur Elon Musk as well as his wife, Kim Kardashian, with whom he shares four children: North, 7, Saint, 4, Chicago, 2, and Psalm, 14 months.

A source recently told Us Weekly exclusively that West “believes he can be a bridge between Republicans and Democrats” in the race against incumbent Trump, 74, and former vice president Joe Biden.

“Kanye believes in supporting big-business tax breaks but also more stimulus and opportunities for minorities and Black people,” the insider said on July 8. “He believes in massive education reform and wants to build world-class infrastructure projects.”

The news of the entertainer’s political aspirations come ahead of the release of his 10th studio album, Donda, which is named after his late mother and is expected to drop on Friday, July 24. He has denied that his run for office is a publicity stunt for the project.

Scroll down to read six of West’s most outrageous statements from his rally on Sunday.

He and Kim ‘Talked About’ Aborting Daughter North

After telling the crowd that he once feared he “gave Kim Kardashian AIDS” because he “had a different girlfriend every day” before they got together, West revealed that the couple considered having an abortion when the Keeping Up With the Kardashians star, 39, got pregnant with their first child.

West falsely claimed that abolitionist Harriet Tubman “never actually freed” the dozens of enslaved people she took through the Underground Railroad. “She just had the slaves go work for other white people,” he said.