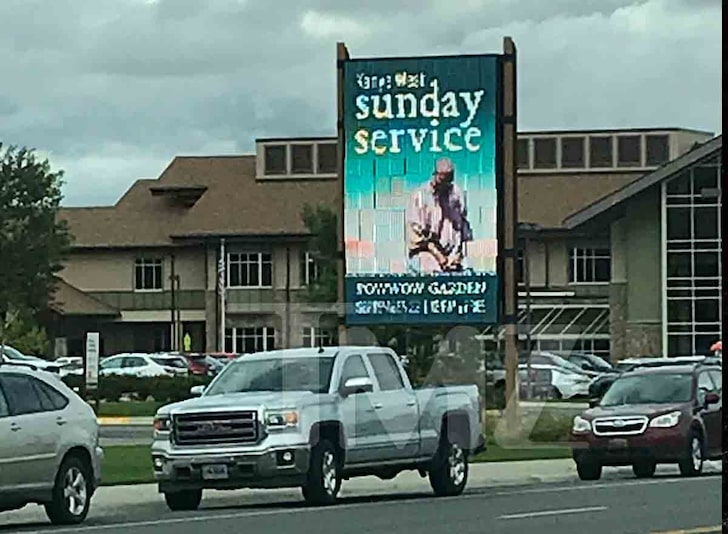 Kanye West wants his presence in Wyoming to be known far and wide — it looks like he’s hosting a mega Sunday Service this week, inviting all the townsfolk and...
by Raquel Jayson September 21, 2019 325 Views

Kanye West wants his presence in Wyoming to be known far and wide — it looks like he’s hosting a mega Sunday Service this week, inviting all the townsfolk and their mom.

We already know he and Kim have made themselves at home — getting acquainted with the local wildlife, to the chagrin of the Wyoming Game & Fish Dept. Now, it looks like Kanye wants to properly introduce the Wests to the community, ’cause his Sunday Service is being heavily advertised on a massive digital billboard, as well as on social media.

According to the venue’s Facebook post about it, he’s bringing out his “80-person choral group” for the performance — so yeah, Kanye and co. are pulling out all the stops.

Preparations are currently underway for the free and public event, and it looks like they’re expecting quite a turnout. Photos obtained by TMZ show a bunch of tents being set up Saturday ahead of Ye’s Sunday Service, with catering and special event trucks in tow.

The Powwow Garden has a capacity of about 700 people — 200 seated or 700 standing according to the Center’s website — but it’s unclear how many people will actually show up. FYI, there are less than 10,000 people total living in Cody itself.

It’s an interesting move on Kanye’s part, as many of his Sunday Services of late have been relatively low-key — not including the Chicago stop, of course. This appears to be the exact opposite of that — pretty much a come one, come all approach.INSIDE MONSTER LAKE RANCHLAUNCH GALLERYJP King Auction Company

Considering Wyoming is basically his 2nd home base now, maybe he’s looking at it like a housewarming party … just on a much larger stage. No one makes a splash like Ye.

DABABY THROWING A PUNCH FROM THE STAGE??? … Fan Goes For His Chain