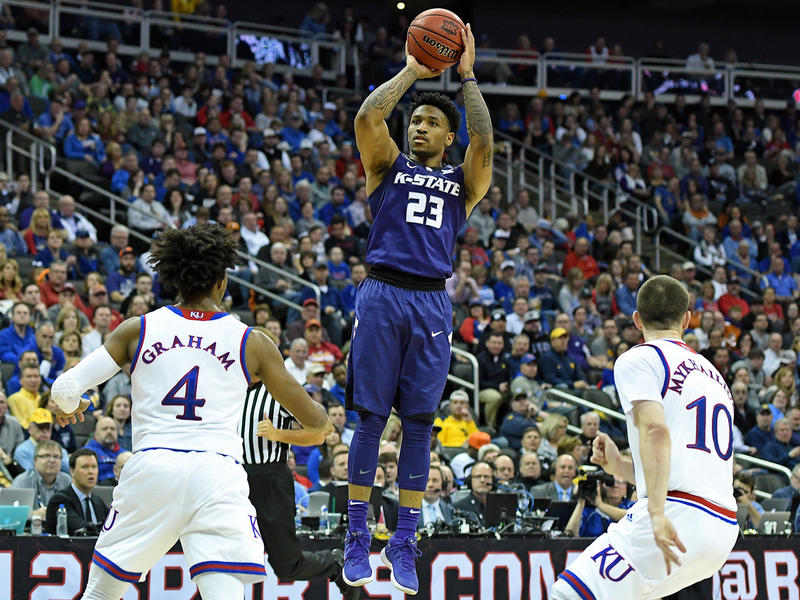 Kansas State junior guard Amaad Wainright was arrested Tuesday in Kansas City by U.S. Marshals and has been charged in Johnson County with two felonies: fleeing and eluding and...
by Zach Freeman April 3, 2018 454 Views

Kansas State junior guard Amaad Wainright was arrested Tuesday in Kansas City by U.S. Marshals and has been charged in Johnson County with two felonies: fleeing and eluding and obstruction.

Wainright was arrested by U.S. Marshals about 2 p.m. Tuesday in Kansas City, according to Craig Beam, chief deputy for the U.S. Marshals Service in Kansas. Wainright has been suspended indefinitely from the Wildcats basketball team.

“We are aware of Amaad’s situation, and due to the seriousness of the charges he has been indefinitely suspended from our men’s basketball team per athletic department policy,” K-State athletic director Gene Taylor said in a statement. “We take matters such as these very seriously and will re-evaluate his status as we learn more information.”

The charges stem from a Jan. 17 incident in Overland Park, Kan.

The warrant was issued March 28 and the arrest was carried out by the U.S. Marshals Fugitive Task Force. Wainright will be held in custody in the Johnson County jail.

Neither Wainright nor his parents immediately responded to calls seeking comment Tuesday afternoon.

Wainright’s playing status was in doubt after Overland Park police said a passenger in his car fired a handgun into the back seat of another car on Jan. 17. There were no arrests following the incident, but police investigated.

Wainright was considered an “involved other” in the case, according to a copy of the incident report, which listed three crimes – aggravated assault with a deadly weapon, criminal damage to property (estimated at $1,500) and criminal discharge of a firearm. The crimes were reported to be the result of a road-rage incident at about 5 p.m. along Interstate 435 between State Line and Roe in Overland Park.

K-State coach Bruce Weber chose not to play Wainright in the Wildcats’ following game against TCU on Jan. 20 and later said his benching could be considered a suspension. At the time, a statement from the athletic department said it considered the matter closed.

Wainright, a Kansas City native, transferred to K-State last summer from Trinity Valley Community College in Athens, Texas. He played in 36 games this season, averaging 2.8 points and 2.3 rebounds as a reserve.