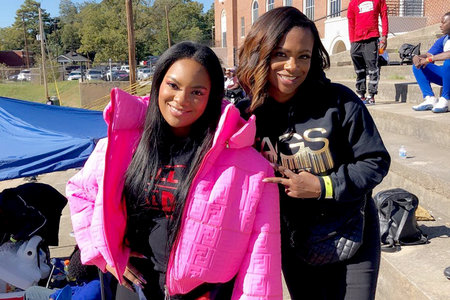 Christmas has indeed come early for Kandi Burruss‘ daughter, Riley Burruss. The Real Housewives of Atlanta teen was just accepted into college, and her first choice at that!

Riley, 17, will officially be part of the class of 2024 at New York University. “My baby got accepted into #NYU!!!!!” Kandi gushed on Instagram on December 16. “I am so proud of @rileyburruss!”

Kandi also noted in a video posted on her YouTube channel on December 16 that NYU was Riley’s “first choice.”

“Well, I feel ecstatic,” Riley said in the video. “I mean, it was the only school I really even wanted to go to. I only even thought of applying to other schools as backup plans. That was the only school in my mind. So just to see that I got in and it’s for sure and I can just go and be on my path, I’m very excited.”

Riley said she “was definitely stressed” right before she found out she got accepted, but she tried to stay positive. In the video, we also see the moment Riley learns that she’s been admitted into NYU, and she and Kandi are immediately overcome with emotion. Kandi even jumps up and down when she hears of Riley’s acceptance, accidentally turning off the recording for a second. “Oh my god, I’m so happy!” Kandi said in the clip.

Riley will be enrolling in the Steinhardt School of Culture, Education, and Human Development at NYU, although she did not specify what major she will be pursuing. However, Riley said in another video posted on her Instagram on December 16 that she hopes to become an entertainment lawyer one day.

When she begins her freshman year at NYU, Riley will not be living in stunning digs like the ones we saw Riley move into for the summer during her internship at a law firm this season of RHOA. Rather, she will be living in a college dorm, and Kandi has plans for her room in their house in Atlanta, although Riley isn’t exactly on board with that and would like to revisit the conversation in 10 years.

Kandi took Riley to the Atlanta Hawks game against the Los Angeles Lakers on December 15 to celebrate. “Todd [Tucker] gave up his ticket so she could go to the game, and it’s like the biggest game of the year,” Kandi said.

Riley felt like her college acceptance was definitely something to celebrate. “This is the biggest moment of my life so far,” she said. “Going to college at a good college, like, that’s huge.”

That’s something that Kandi, who did not attend college, acknowledges as well. “You know what? This is huge because I never went to college, so I didn’t really know what to do during this process,” Kandi said. “I don’t know about that life. I never did it, but I’m so excited for Riley, and I’m so proud to have my firstborn get ready to attend NYU.”Kandi Burruss’ Daughter Riley Burruss Just Applied to College at Her “Dream School”

Todd is also thrilled that Riley will get to experience life in his hometown. “New York is the best place for her to go. She’s gonna encounter so many different experiences, from just multicultural to different ethnic backgrounds to riding the train to living in small quarters,” he said to Kandi in the YouTube video. “To go from this house to living in an apartment that’s probably the size of this kitchen is definitely an adjustment, but it’s gonna definitely build character. Your daughter’s gonna be different every time she comes home.”

Once Riley is in college, she also has plans to intern at a record label, and she wants to attend law school after she graduates NYU. “Doing big things, speaking everything good into existence, and hoping for an amazing future. I appreciate [Kandi] for the help on my path,” Riley said. “And also, so I don’t have to worry about student loans. I very much appreciate that.”

Though Kandi said that she knows she’s going to have to continue to work hard to put Riley through school, she’s more than happy to do it since big things are in her daughter’s future. “Keep doing it, girl,” Kandi said. “I’m proud of you.”

TEKASHI 6IX9INE Was Sentenced To 2 Years In Jail, He Has Served 13 Months. Will He Be Safe On The Streets After Snitching?